Mary Margaret Anglin (April 3, 1876 – January 7, 1958) was a Canadian-born Broadway actress, director and producer whom Encyclopædia Britannica calls "one of the most brilliant actresses of her day."[citation needed] 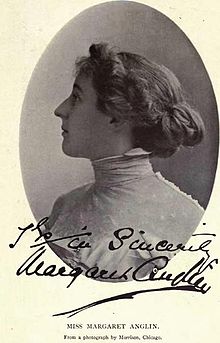 Margaret Anglin was born in Ottawa, Ontario, the eldest of nine children of newspaper editor and politician Timothy Warren Anglin (1822–1896) by his second wife, Miss MacTavish. At the time of her birth in Ottawa, April 3, 1876, he was the Speaker of the Canadian House of Commons. Her older brother, Francis Alexander Anglin (1865–1933) served as Chief Justice of the Supreme Court of Canada from 1924 to 1933.

She was educated at Loretto Abbey, Toronto, and at the Convent of the Sacred Heart, Montreal. She graduated from the Empire School of Dramatic Acting, New York, in 1894, where she studied under Nelson Wheatcroft.[1] Her acting skills brought the attention of theatre impresario Charles Frohman who provided her with the opportunity to make her professional stage debut in 1894 in the Bronson Howard production of "Shenandoah."

An injury sustained while out riding laid her up for some months. In 1896 she became leading lady with James O'Neill, and toured with him in the United States and Canada. She subsequently played with the Sothern Company, and scored a great success as Lady Ursula. In 1896 she played Ophelia opposite James O'Neill.[2] She went on to make her first Broadway theatre appearance in the 1898 production of "Lord Chumley" then achieved considerable fame in 1898 on tour portraying "Roxane" in the Edmond Rostand play, Cyrano de Bergerac starring Richard Mansfield. She became leading lady with Charles Frohman, in California, in 1899. She performed with the Empire Theatre Company, New York.

By 1905 she had gained wide recognition for her acting skills and in December of that year the New York Times reported that, following a benefit matinee for the Jewish sufferers in Russia, the doyenne of the stage Sarah Bernhardt asked Anglin to perform with her in the Maurice Maeterlinck play Pelléas et Mélisande. The blessing by the great Bernhardt sealed Margaret Anglin's reputation as the new star of American theatre. 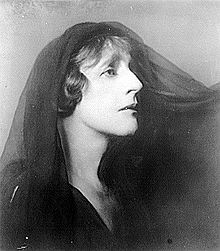 Inspired by reading the classics and a love for the Greek tragedies that centered on women, Margaret Anglin became the dominant dramatic actress of the first two decades of the 20th Century in Greek tragedies and acclaimed for her performances in Shakespearean plays, acting and producing The Taming of the Shrew, As You Like It, and Twelfth Night in repertory at Broadway's Hudson Theatre in 1914.

In 1911, Margaret Anglin became a U.S. citizen through her marriage to fellow actor Howard Hull. In 1929, after her husband had not been cast in a Broadway production for twenty years, she insisted that producers give him a role in her plays. Balked at by the producers, she walked out on a production and did not return to until 1936 in what would be her final Broadway appearance. Like many Broadway luminaries at the beginning of the century Anglin refused to sacrifice her theatrical art by bowing to the new medium motion pictures.

Margaret Anglin returned to live in Toronto in 1953 where she died in 1958. She bore no children. She was interred there in the Anglin family plot at Mount Hope Catholic Cemetery.