The Cessna 152 is an American two-seat, fixed tricycle gear, general aviation airplane, used primarily for flight training and personal use. 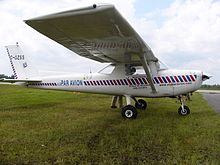 First delivered in 1977 as the 1978 model year, the 152 was a modernization of the proven Cessna 150 design. The 152 was intended to compete with the new Beechcraft Skipper and Piper Tomahawk, both of which were introduced the same year.[1] Additional design goals were to improve useful load through a gross weight increase to 1670 lbs (757 kg), decrease internal and external noise levels and run better on the then newly introduced 100LL fuel.[2]

As with the 150, the great majority of 152s were built at the Cessna factory in Wichita, Kansas. A number of aircraft were also built by Reims Aviation of France and given the designation F152/FA152.[1]

Production of the 152 was ended in 1985 when Cessna ended production of all of their light aircraft; by that time, a total of 7,584 examples of the 152, including A152 and FA152 Aerobat aerobatic variants, had been built worldwide.

In 2007 Cessna announced that it will build a light sport successor, designated the Model 162 Skycatcher.[3]

All Cessna 152s were manufactured with a Lycoming O-235 engine, whereas the 150s use either Continental O-200-A in US-built versions or Rolls-Royce 0-240-A engines in the Reims-produced version.[1]

The Lycoming provided not only an increase in engine power over the Cessna 150, but also was more compatible with the newer 100LL low lead fuel.[1]

The 152's airframe is an all-metal construction. It is primarily aluminium 2024-T3 alloy, although some components such as wing tips and fairings are made from glass-reinforced plastic. The fuselage is a semi-monocoque structure: it has vertical bulkheads and frames joined by longerons which run the length of the fuselage. The metal skin of the aircraft is riveted, which allows loads to be spread out over the structure. The wings are of a strut-braced design and have a 1 degree dihedral angle. The tapered (outboard) portion of each wing has one degree of washout (the chord of the tip section has one degree lower angle of attack than the chord at the end of the constant-width section). This allows greater aileron effectiveness during a stall, although it is much less than the 3 degrees used in Cessna 172 wings.[4] 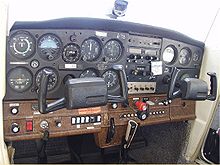 Dual controls are available as optional equipment on the Cessna 152[4] and almost all 152s have this option installed.

The Cessna 152 is equipped with differential ailerons that move through 20 degrees upwards and 15 degrees downwards. It has modified Fowler (slotted, aft-traveling) flaps which are electrically operated and deploy to a maximum of 30 degrees. The rudder can move 23 degrees to either side and is fitted with a ground adjustable trim tab. The elevators move up through 25 degrees and down through 18 degrees. An adjustable trim tab is installed in the right elevator and is controlled by a small wheel in the center of the control console. The trim tab moves 10 degrees up and 20 degrees down relative to the elevator chordline.[4]

The Cessna 152 is equipped with fixed tricycle landing gear. The main gear is a tubular steel undercarriage leg surrounded by a full length fairing with a step for access to the cabin. The main gear has a 7 ft 7 in (2.3 m) wheelbase.[1]

The nose wheel is connected to the engine mount and has an oleo strut to dampen and absorb normal operating loads. The nosewheel is steerable through 8 degrees either side of neutral and can caster under differential braking up to 30 degrees. It is connected to the rudder pedals through a spring linkage.[4]

The braking system consists of single disc brake assemblies fitted to the main undercarriage and operated by a hydraulic system. Brakes are operated by pushing on the top portion of the rudder pedals. It is possible to use differential braking when taxiing and this allows very tight turns to be made.[4]

The 152 is also fitted with a parking brake system. It is applied by depressing both toe brakes and then pulling the "Park Brake" lever to the pilot’s left. The toe brakes are then released but pressure is maintained in the system thereby leaving both brakes engaged.[4]

There are hundreds of modifications available for the Cessna 152. The most frequently installed include:

Taildragger conversions such as the 'Texas Taildragger' conversion are available and have been fitted to some 152s. It involves strengthening the fuselage for the undercarriage being moved further forward, removing the nosewheel and strengthening the tail area for the tailwheel. This greatly improves short field performance and is claimed to give up to a 10 kn (19 km/h) cruise speed increase.[5][6]

The wings can be modified using a number of STOL modification kits, some improving high speed/cruise performance but most concentrating on STOL performance. Horton's STOL kit is one of the better known of the latter. It involves fitting a more cambered leading edge cuff to increase the maximum coefficient of lift, fitting fences at the aileron/flap intersection and fitting drooped wingtips. Stalls with these modifications are almost off the airspeed indicator, since instrument error is high at high angles of attack.[5][6] It has been said that landings can be achieved in 2 fuselage lengths with the kit installed in addition to a taildragger mod., by balancing power against drag.[6] Takeoff performance is also improved by varying degrees depending on the surface.

The engine's power can be increased by various modifications, such as the Sparrow Hawk power package, increasing it to 125 hp (93 kW).[5][6] The disadvantage of the Sparrow Hawk conversion is that it uses pistons from the O-235-F series engine and therefore the engine time between overhaul is reduced from 2400 Hours to 2000 Hours.[citation needed]

Other popular modifications include:

A 1980 A152 Aerobat with its distinctive factory paint scheme

152
Two-seat light touring aircraft, fitted with a fixed tricycle landing gear, powered by a 110-hp (82-kW) Lycoming O-235-L2C piston engine, 6628 built.[7] Available with a number of avionic options, aside from the standard Model 152 there was a 152 II with an enhanced package of standard avionics and trim features. The 152 II with Nav Pac included more standard avionics for IFR use. The 152T was a standard option package for use by flying schools, the "T" indicating "trainer" and not a sub-model.[1] Type approved in 1977 and produced as 1978 to 1985 model years.[8]

A152 Aerobat
Two-seat aerobatic-capable aircraft, 315 built.[7] Certified for +6/-3 Gs and had standard four-point harnesses, skylights and jettisonable doors, along with a checkerboard paint scheme and removable seat cushions to allow parachutes to be worn by the crew.[1][2] Type approved in 1977 and produced as 1978 to 1985 model years.[8]

The 152 is popular with flight training organizations and is also widely operated by private individuals.