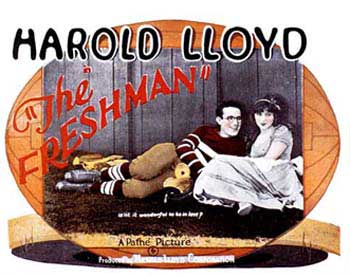 "The Freshman" is a fy|1925 that tells the story of a college freshman trying to become popular by joining the school football team. It stars , , and James Anderson. It remains one of Lloyd's most successful and enduring films.

The movie was written by John Grey, Sam Taylor, and . It was directed by and Sam Taylor.

In 1990, "The Freshman" was selected for preservation in the United States by the as being "culturally, historically, or aesthetically significant", going in the second year of voting and being one of the first 50 films to receive such an honor.

Lloyd plays Harold 'Speedy' Lamb, a bright-eyed but hopelessly naive young man who goes to Tate University to fulfill his dream of being popular.

Harold decides the best way to win the college over is to imitate his movie hero, The College Hero. He mimics him down to a little dance he does before greeting anyone for the first time. At college, he is quickly designated the "fool" and the entire college participates in an ongoing joke to make him think he's popular, when in fact he's the laughing stock of the whole school. He tries out for the college football team only to be made their practice tackle dummy and eventually their water boy. His only real friend is Peggy, described in subtitles as "what your mother was like when she was young," and who works in his boarding house.

The whole thing finally falls apart during the dance, in which Harold loses his clothes in the movie's biggest scene due to a mishap with the tailor. It is finally revealed to him just what everyone thinks of him. Deciding he'll show them all that he's not just a joke, Harold is determined to get into the next big football game. His chance comes when his coach runs out of players, and he makes the most of it, haphazardly scoring the winning touchdown, which at last earns him the respect and popularity he was after. But he doesn't even want it any more. He's happiest with the fact that Peggy has just announced her love for him.

"The Freshman" was Lloyd's most successful silent film of the 1920s, and was hugely popular at the time of its release. It sparked a craze for college films that lasted well beyond the 1920s, but none of these surpassed its high standard. Exteriors were filmed near the USC Campus in Los Angeles. The game sequence was shot on the field at the Rose Bowl, and the crowd scenes were shot at halftime at during the November 1924 Big Game between and . The football game sequence was reused by Lloyd and director in Lloyd's last film, "The Sin of Harold Diddlebock" (1947).

"The Freshman" is still a great audience pleaser at modern screenings, and is widely considered one of Lloyd's most hilarious, well-constructed films. "The Freshman" was one of Lloyd's only films to remain widely available after the sound era, and Lloyd reissued the film (with cuts) and used extended scenes in compilation films of the 1960s. The DVD release of Lloyd's films in 2004 includes the full, restored version of the film as shown in the 1920s.

makes a cameo in the movie.