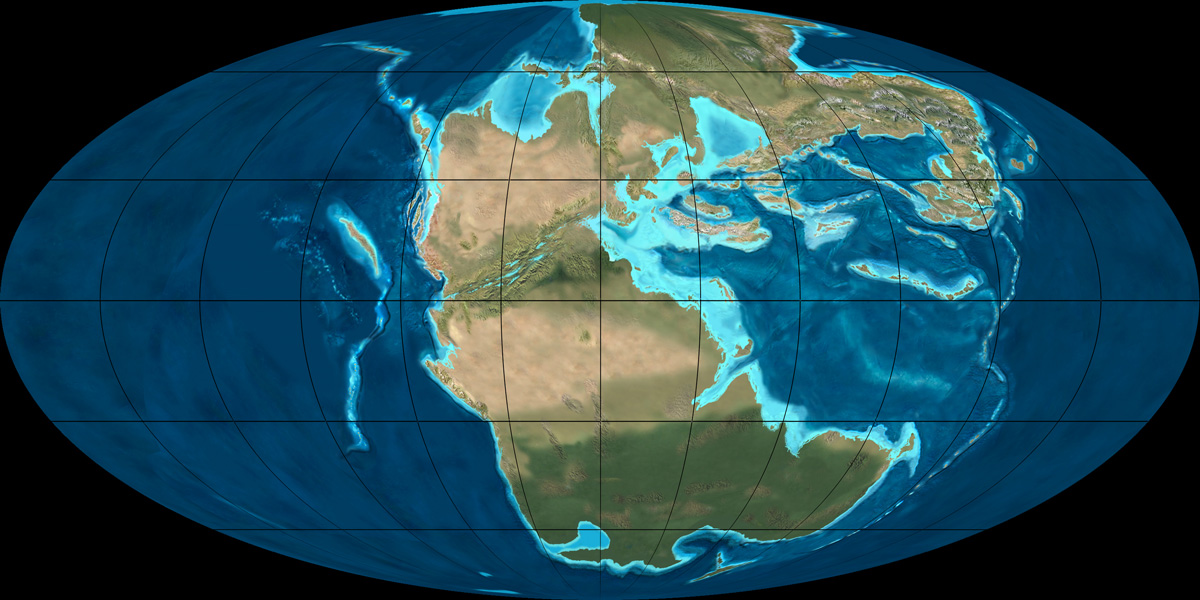 During the Triassic, both marine and continental life show an beginning from the starkly impoverished that followed the Permian-Triassic extinction. Corals of the group made their first appearance. The first flowering plants (Angiosperms) may have evolved during the Triassic, as did the first flying vertebrates, the s.

The Triassic was named in 1834 by from the three distinct layers (Latin "trias" meaning ) &mdash;s, capped by , followed by black s&mdash; that are found throughout and northwest , called the 'Trias'.

The Triassic is usually separated into Early, Middle, and Epochs, and the corresponding rocks are referred to as Lower, Middle, or Upper Triassic. The from the youngest to oldest are:

During the Triassic, almost all the Earth's land mass was concentrated into a single centered more or less on the equator, called ("all the land"). From the east a vast gulf entered Pangaea, the Tethys sea. It opened farther westward in the mid-Triassic, at the expense of the shrinking , an ocean that existed during the . The remaining shores were surrounded by the world-ocean known as ("all the sea"). All the deep-ocean sediments laid down during the Triassic have disappeared through of oceanic plates; thus, very little is known of the Triassic open ocean.The supercontinent Pangaea was rifting during the Triassic&mdash;especially late in the period&mdash;but had not yet separated. The first nonmarine sediments in the that marks the initial break-up of Pangea&mdash;which separated from &mdash;are of Late Triassic age; in the U.S., these thick sediments comprise the . [ [http://rainbow.ldeo.columbia.edu/courses/v1001/10.html Lecture 10 - Triassic: Newark, Chinle ] ] Because of the limited shoreline of one super-continental mass, Triassic marine deposits are globally relatively rare, despite their prominence in , where the Triassic was first studied. In , for example, marine deposits are limited to a few exposures in the west. Thus Triassic is mostly based on organisms living in lagoons and hypersaline environments, such as "" crustaceans.

The Triassic climate was generally hot and dry, forming typical red bed s and s. There is no evidence of glaciation at or near either pole; in fact, the polar regions were apparently moist and , a climate suitable for reptile-like creatures. Pangaea's large size limited the moderating effect of the global ocean; its was highly seasonal, with very hot summers and cold winters. [Stanley, 452-3.] It probably had strong, -ial . [Stanley, 452-3.]

Three categories of organisms can be distinguished in the Triassic record: holdovers from the , new groups which flourished briefly, and other new groups which went on to dominate the world.

In marine environments, new modern types of appeared in the Early Triassic, forming small patches of of modest extent compared to the great reef systems of times or modern reefs. The shelled s called s recovered, diversifying from a single line that survived the Permian extinction. The fish fauna was remarkably uniform, reflecting the fact that very few families survived the Permian extinction. There were also many types of marine reptiles. These included the , which featured s and s (both common during the Middle Triassic, especially in the Tethys region), s, and the first s; the first of the lizardlike (askeptosaurs); and the highly successful s, which appeared in Early Triassic seas and soon diversified, some eventually developing to huge size during the late Triassic.

On land, the holdover plants included the s, the dominant s, (represented in modern times by "Ginkgo biloba") and glossopterids. The s, or seed plants came to dominate the terrestrial flora: in the northern hemisphere, s flourished. "" (a ) was the dominant southern hemisphere tree during the Early Triassic period.

Temnospondyl s were among those groups that survived the Permian-Triassic extinction, some lineages (e.g. Trematosaurs) flourishing briefly in the Early Triassic, while others (e.g. ) remained successful throughout the whole period, or only came to prominence in the Late Triassic (e.g. s, s). As for other amphibians, the first are known from the Early Triassic, but the group as a whole did not become common until the , when the temnospondyls had become very rare.

Archosauromorph reptiles &mdash; especially s &mdash; progressively replaced the s that had dominated the Permian. Although "" was a characteristic top predator in earlier Triassic ( and ) , and both kannemeyeriid s and s remained important s during much of the period. By the end of the Triassic, synapsids played only bit parts. During the (early part of the Late Triassic), some advanced cynodont gave rise to the first mammals. At the same time the , which until then had been small and insignificant, evolved into s and a variety of s. The were the other important archosaur , and during the Late Triassic these also reached the height of their diversity, with various groups including the s, s, several distinct lineages of , and the first ns (the ). Meanwhile the stocky herbivorous s and the small to medium-sized insectivorous or piscivorous were important basal archosauromorph groups throughout most of the Triassic.

Among other reptiles, the earliest turtles, like "" and "", appeared during the (middle of the Late Triassic). The &mdash;specifically the &mdash;are first known in the fossil record a little earlier (during the Carnian). The were an important group of small lizard-like herbivores.

Archosaurs were initially rarer than the s which had dominated terrestrial ecosystems, but they began to displace therapsids in the mid-Triassic.

The lagerstätte, now in the region of northern and , was in Triassic times a behind reefs with an anoxic bottom layer, so there were no scavengers and little turbulence to disturb fossilization, a situation that can be compared to the better-known Jurassic lagerstätte. The remains of fish and various marine reptiles (including the common "", and the bizarre long-necked ""), along with some terrestrial forms like "" and "", have been recovered from this locality. All these fossils date from the / transition (about 237 million years ago).

The Triassic period ended with a mass extinction, which was particularly severe in the oceans; the disappeared, and all the marine reptiles except ichthyosaurs and plesiosaurs. Invertebrates like s, s, and s were severely affected. In the oceans, 22% of marine families and possibly about half of marine genera went missing according to paleontologist .

Though the end-Triassic extinction event was not equally devastating everywhere in terrestrial ecosystems, several important clades of crurotarsans (large archosaurian reptiles previously grouped together as the s) disappeared, as did most of the large labyrinthodont amphibians, groups of small reptiles, and some synapsids (except for the proto-mammals). Some of the early, primitive dinosaurs also went extinct, but other more adaptive dinosaurs survived to evolve in the Jurassic. Surviving plants that went on to dominate the Mesozoic world included modern conifers and cycadeoids.

What caused this Late Triassic extinction is not known with certainty. It was accompanied by huge volcanic eruptions that occurred as the supercontinent Pangaea began to break apart about 202 to 191 million years ago [(40Ar/39Ar dates [Nomade et al.,2007 Palaeogeography, Palaeoclimatology, Palaeoecology 244, 326-344.] )] , forming the [(CAMP)] [Marzoli et al., 1999, Science 284. Extensive 200-million-year-old continental flood basalts of the Central Atlantic Magmatic Province, pp. 618-620.] , one of the largest known inland volcanic events since the planet cooled and stabilized. Other possible but less likely causes for the extinction events include global cooling or even a impact, for which an impact crater containing in , , has been singled out. At the Manicouagan impact crater, however, recent research has shown that the impact melt within the crater has an age of 214±1 Ma. The date of the Triassic-Jurassic boundary has also been more accurately fixed recently, at 201.58±0.28 Ma. Both dates are gaining accuracy by using more accurate forms of radiometric dating, in particular the decay of uranium to lead in zircons formed at the impact. So the evidence suggests the Manicouagan impact preceded the end of the Triassic by approximately 10±2 Ma. Therefore it could not be the immediate cause of the observed mass extinction. [Hodych & Dunning, 1992.]

The number of Late Triassic extinctions is disputed. Some studies suggest that there are at least two periods of extinction towards the end of the Triassic, between 12 and 17 million years apart. But arguing against this is a recent study of North American faunas. In the Petrified Forest of northeast Arizona there is a unique sequence of latest Carnian-early Norian terrestrial sediments. An [http://gsa.confex.com/gsa/2002AM/finalprogram/abstract_42936.htm analysis in 2002] found no significant change in the paleoenvironment. [ [http://gsa.confex.com/gsa/2002AM/finalprogram/abstract_42936.htm No Significant Nonmarine Carnian-Norian (Late Triassic) Extinction Event: Evidence From Petrified Forest National Park ] ] s, the most common fossils there, experienced a change-over only at the genus level, and the number of species remained the same. Some s, the next most common tetrapods, and early dinosaurs, passed through unchanged. However, both phytosaurs and aetosaurs were among the groups of archosaur reptiles completely wiped out by the end-Triassic extinction event.

It seems likely then that there was some sort of end-Carnian extinction, when several herbivorous archosauromorph groups died out, while the large herbivorous s&mdash; the kannemeyeriid dicynodonts and the traversodont cynodonts&mdash; were much reduced in the northern half of Pangaea ().

These extinctions within the Triassic and at its end allowed the dinosaurs to expand into many niches that had become unoccupied. Dinosaurs became increasingly dominant, abundant and diverse, and remained that way for the next 150 million years. The true "Age of Dinosaurs" is the Jurassic and Cretaceous, rather than the Triassic.