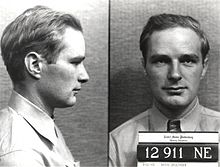 Dellinger achieved peak notoriety as one of the Chicago Seven, protesters whose disruption of the 1968 Democratic National Convention in Chicago led to charges of conspiracy and crossing state lines with the intention of inciting a riot. The ensuing court case was turned by Dellinger and his co-defendants into a nationally-publicized platform for putting the Vietnam War on trial. On February 18, 1970, they were acquitted of the conspiracy charge but five defendants (including Dellinger) were convicted of individually crossing state lines to incite a riot.

Judge Hoffman's handling of the trial, along with the FBI's bugging of the defence lawyers, resulted, with the help of the Center for Constitutional Rights, in the convictions being overturned by the Seventh Circuit Court of Appeals two years later, on 21 November 1972. Although the contempt citations were upheld, the appeal court refused to sentence anyone.[1][2]

Dellinger was born in Wakefield, Massachusetts to a wealthy family. His father was a lawyer and a prominent Republican. A Yale University and Oxford University student, he also studied theology at Union Theological Seminary. Rejecting his comfortable background, he walked out of Yale one day to live with hobos during the Depression. While at Oxford, he visited Nazi Germany and drove an ambulance during the Spanish Civil War. During World War II, he was an imprisoned conscientious objector and anti-war agitator. In federal prison, he and fellow conscientious objectors — including Ralph DiGia and Bill Sutherland — protested racial segregation in the dining halls, which were ultimately integrated due to the protests.[3] In February 1946, Dellinger helped to found the radical pacifist Committee for Nonviolent Revolution.[4]

During the 1950s and 1960s, Dellinger joined freedom marches in the South and led many hunger strikes in jail. As US involvement in Vietnam grew, Dellinger applied Gandhi's principles of non-violence to his activism within the growing anti-war movement, of which one of the high points was the Chicago Seven trial. He travelled to both North and South Vietnam in 1966 to learn first-hand the impact of American bombing and later recalled that critics ignored his trip to Saigon and focused solely on his visit to Hanoi.[5]

In 1956, he and A. J. Muste founded the magazine Liberation, as a forum for the non-Marxist left, similar to Dissent.[6]

Dellinger had contacts and friendships with such diverse individuals as Eleanor Roosevelt, Ho Chi Minh, Martin Luther King, Jr., Abbie Hoffman, A.J. Muste, Greg Calvert, David McReynolds and numerous Black Panthers, including Fred Hampton, whom he greatly admired. As chairman of the Fifth Avenue Vietnam Peace Parade Committee he worked with many different anti-war organizations, and helped bring Dr. King and James Bevel into leadership positions in the 1960s anti-war movement. He sat on the executive committee of the Socialist Party of America and the Young People's Socialist League, its youth section, until he left in 1943; and was also a long-time member of the War Resisters League. In 1968, he signed the “Writers and Editors War Tax Protest” pledge, vowing to refuse tax payments in protest against the Vietnam War.[7]

Dellinger appeared at the December 1971 gathering of music and political views in favor of the then-jailed John Sinclair.[8]

Anti-war activist, socialist and author for his lifelong commitment to pacifist values and for serving as a spokesperson for the peace movement, Dellinger was awarded the Peace Abbey Courage of Conscience on September 26, 1992.

In 1996, at the first Democratic Convention held in Chicago since 1968, Dellinger was arrested along with nine others (including his own grandson as well as Abbie Hoffman's son Andrew) during a sit-in protest at Chicago's Federal Building. Later, in 2001, he led a group of young activists from Montpelier, Vermont, to Quebec City, to protest the creation of a free trade zone.

"Before reading [his autobiography], I knew and greatly admired Dave Dellinger. Or so I thought. After reading his remarkable story, my admiration changed to something more like awe. There can be few people in the world who have crafted their lives into something truly inspiring. This autobiography introduces us to one of them." — Noam Chomsky, from the dustjacket of From Yale to Jail