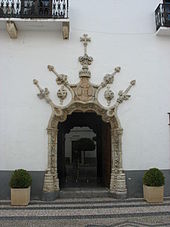 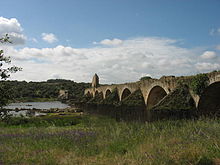 Ruins of 16th century Ajuda bridge over the Guadiana, in the ancient road between Elvas and Olivenza 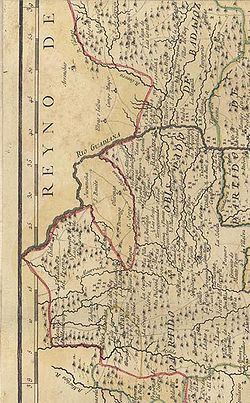 Part of an 18th century Spanish map, showing Olivenza as part of Portugal 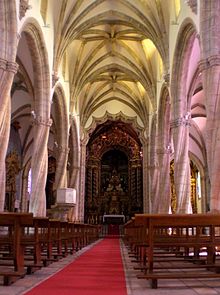 Olivenza (Spanish: [oliˈβenθa]) or Olivença (Portuguese: [oliˈvẽsɐ]) is a town in the autonomous community of Extremadura, situated on a disputed section of the border between Portugal and Spain. Olivenza is claimed by both countries and is currently administrated by Spain.[1]

As Olivença, the town was under Portuguese sovereignty between 1297 (Treaty of Alcañices) and 1801 when it was ceded to Spain under the Treaty of Badajoz. Spain has since administered the territory (now split into two municipalities, Olivenza and Táliga), whilst Portugal invokes the self-revocation of the Treaty of Badajoz, plus the Treaty of Vienna of 1815, to claim the return of the territory. In spite of the territorial dispute between Portugal and Spain, the issue has not been a sensitive matter in the relations between these two countries.[2][3] Olivenza and other neighbouring Spanish (La Codosera, Alburquerque and Badajoz) and Portuguese (Arronches, Campo Maior, Estremoz, Portalegre and Elvas) towns reached an agreement in 2008 to create a euroregion.[4][5]

Olivenza is located on the left (east) bank of the Guadiana river, at an equal distance of 24 km south of Elvas in Portugal and Badajoz in Spain. The territory is triangular, with a smaller side resting on the Guadiana and the opposite vertex entering south-east and surrounded by Spanish territory. By an agreement between Spain and Portugal, the left bank of the river was recognized as being Portuguese territory (to a non-defined width, though), and sets de facto border in that area.

There are still traces of Portuguese culture and language in the people, although the younger generations speak Spanish only[citation needed]. Famous people born in Olivenza include Cardinal Pedro da Fonseca (?-after 1419) and music composer Vicente Lusitano (?-after 1561).

Olivenza had been under undisputed Portuguese sovereignty since 1297 until it was occupied by the Spanish in 1801, and formally ceded by Portugal, after being invaded and defeated by Spain at the War of the Oranges, later that year by the Treaty of Badajoz.

Spain claims the de jure sovereignty over Olivenza on the grounds that the Treaty of Badajoz still stands and has never been revoked. Thus, the border between the two countries in the region of Olivenza should be as demarcated by that treaty. Though, the terms of the very Treaty of Badajoz undoubtedly state that if war was ever to again occur between the two countries, then the Treaty would be void. And that happened when Spain itself later invaded Portugal.

Portugal claims the de jure sovereignty over Olivenza exactly evoking the same Treaty of Badajoz, since it was revoked by its own terms (the breach of any of its articles would lead to its cancellation) when Spain invaded Portugal in the Peninsular War of 1807. Portugal further bases its case on Article 105 of the Treaty of Vienna of 1815, which Spain signed in 1817, that states that the winning countries are to "endeavour with the mightiest conciliatory effort to return Olivenza to Portuguese authority". Thus, the border between the two countries in the region of Olivenza should be as demarcated by the Treaty of Alcanizes of 1297.

Spain interprets Article 105 as not being mandatory on demanding Spain to return Olivenza to Portugal, thus not revoking the Treaty of Badajoz.

Portugal has never made a formal claim to the territory after the Treaty of Vienna, but has equally never directly acknowledged the Spanish sovereignty over Olivenza.

There is no research on the opinion of the inhabitants of Olivenza about their status. Spanish public opinion is not generally aware of the Portuguese claim on Olivenza (in contrast to the Spanish claim on Gibraltar or the Moroccan claims on Ceuta, Melilla and the Plazas de soberanía). On the other hand, awareness in Portugal has been increasing under the efforts of pressure groups to have the question raised and debated in public.[15][16][17]