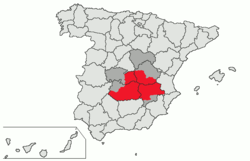 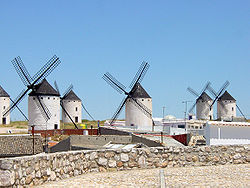 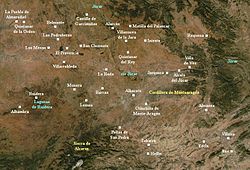 La Mancha is a natural and historical region or greater comarca located on an arid, fertile, elevated plateau (610 m or 2000 ft.) of central Spain, south of Madrid, stretching between the Montes de Toledo and the western spurs of the Serrania de Cuenca. It is bounded on the south by the Sierra Morena and on the north by the La Alcarria region. La Mancha includes portions of the modern provinces of Cuenca, Toledo, and Albacete, and most of the Ciudad Real province. La Mancha historical comarca constitutes the southern portion of Castile-La Mancha autonomous community and makes up most of the present-day administrative region.

The name "La Mancha" is probably derived from the Arab word المنشا al-mansha, meaning "the dry land" or "wilderness". The name of the city of Almansa in Albacete also has the same origin.[1] Broadly, it spans the elevated plateau of central Spain, stretching from the mountains of Toledo to the western spurs of the hills of Cuenca, and bounded to the South by the Sierra Morena and to the North by the Alcarria region.[2]

Pastures and cattle in La Mancha.

The largest plain in the Iberian Peninsula, La Mancha is made up of plateau averaging 500 to 600 metres in altitude (although it reaches 900 metres in Campo de Montiel and other parts), centering on the province of Ciudad Real. The region is watered by the Guadiana, Jabalón, Záncara, Cigüela, and Júcar rivers. The Spanish historian Hosta gives the most accepted description of the limits of the geographical La Mancha plain: 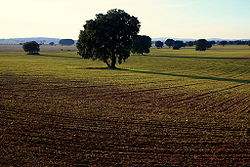 Landscape of the fields in La Mancha.

All the territory, plain, arid and dry, that is between Montes de Toledo and the western skirts of Serranía de Cuenca, and from Alcarria to Sierra Morena, including in this denomination the Mesa de Ocaña high plateau and Quintanar, the comarcas of Belmonte and San Clemente and the old territories of the military Orders of Santiago, San Juan and Calatrava, with all the Sierra de Alcaraz; being its limits to the North the Tajo river and the part called properly Castilla la Nueva, to the East the kingdoms of Valencia and Murcia, and to the South, the kingdoms of Córdoba and Jaén, and to the West, the provinces of Extremadura, spreading 53 leagues from East to West and 33 leagues from North to South. Until the 16th century, the east part was also called Mancha de Monte-Aragón, because of the name of the mountains that were the old border between La Mancha and the Kingdom of Valencia, and to the rest simply Mancha. Afterwards, La Mancha was also divided into Mancha Alta and Mancha Baja, according to the level and flow of its rivers, including the first one the northeast part, from Villarubia de los Ojos until Belmonte, country of the old Iberian Lamitans, and the second one the southwest part, including Campo de Calatrava and Campo de Montiel, old country of the Iberian Oretans.

The climate is continental, with strong fluctuations. Agriculture (wheat, barley, oats, wine grapes, olives) is the primary economic activity, but it is severely restricted by the harsh environmental conditions. 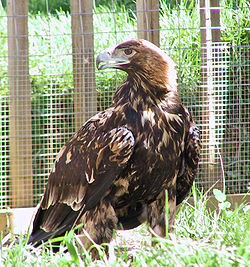 The Spanish Imperial Eagle can be found mostly in the region of La Mancha.

The inhabitants have a nickname Manchegans derived from the namesake of La Manch-a/e.

La Mancha has always been an important agricultural zone. Viniculture is important in Tomelloso, Socuéllamos, Valdepeñas and Manzanares, in Ciudad Real and Villarrobledo in Albacete. Other crops include cereals (hence the famous windmills) and saffron. Sheep are raised and bred, providing the famous Manchego cheese, as are goats, including the La Mancha goat, one of the assumed progenitors of the American La mancha goat. La Mancha includes two National Parks, Las Tablas de Daimiel and Cabañeros, and one Natural Park, Las Lagunas de Ruidera.

Miguel de Cervantes gave international fame to this land and its windmills when he wrote his novel Don Quixote de La Mancha. Cervantes was making fun of this region, using a pun; a "mancha" was also a stain, as on one's honor, and thus a hilariously inappropriate homeland for a dignified knight-errant.[3] Translator John Ormsby believed that Cervantes chose it because it was/is the most ordinary, prosaic, anti-romantic, and therefore unlikely place from which a chivalrous, romantic hero could originate, making Quixote seem even more absurd.