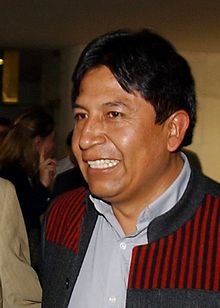 David Choquehuanca Céspedes (born May 7, 1961, Omasuyos Province) is a Bolivian politician. He has served as the Foreign Minister of Bolivia since 23 January 2006.[1]

Choquehuanca, who is an Aymara Indian, is an Aymara activist. He has worked with international agencies and has been an advisor to President Evo Morales, a fellow Aymara, since before Morales's election to the Presidency.[citation needed]

During the 2011 Bolivian protests, he was held hostage by a group of lowland indigenous protesters who wanted to stop the construction of an highway on their tribal lands. They forcefully made him march in their protest so as to curb a counter-police reaction.