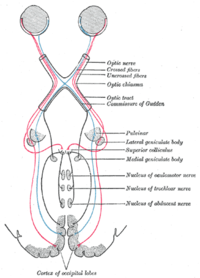 The visual system includes the eyes, the connecting pathways through to the visual cortex and other parts of the brain. The illustration shows the mammalian system.

The visual system is the part of the central nervous system which enables organisms to process visual detail, as well as enabling several non-image forming photoresponse functions. It interprets information from visible light to build a representation of the surrounding world. The visual system accomplishes a number of complex tasks, including the reception of light and the formation of monocular representations; the construction of a binocular perception from a pair of two dimensional projections; the identification and categorization of visual objects; assessing distances to and between objects; and guiding body movements in relation to visual objects. The psychological manifestation of visual information is known as visual perception, a lack of which is called blindness. Non-image forming visual functions, independent of visual perception, include the pupillary light reflex (PLR) and circadian photoentrainment. 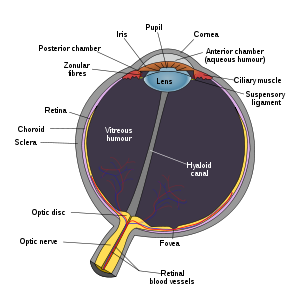 The human eye
The image projected onto the retina is inverted due to the optics of the eye.

Different species are able to see different parts of the light spectrum; for example, bees can see into the ultraviolet,[1] while pit vipers can accurately target prey with their pit organs, which are sensitive to infrared radiation.[2]

In the second half of the 19th century, many motifs of the nervous system were identified such as the neuron doctrine and brain localisation, which related to the neuron being the basic unit of the nervous system and functional localisation in the brain, respectively. These would become tenets of the fledgling neuroscience and would support further understanding of the visual system.

The notion that the cerebral cortex is divided into functionally distinct cortices now known to be responsible for capacities such as touch (somatosensory cortex), movement (motor cortex), and vision (visual cortex), was first proposed by Franz Joseph Gall in 1810.[3] Evidence for functionally distinct areas of the brain (and, specifically, of the cerebral cortex) mounted throughout the 19th century with discoveries by Paul Broca of the language center (1861), and Gustav Fritsch and Edouard Hitzig of the motor cortex (1871).[3][4] Based on selective damage to parts of the brain and the functional effects this would produce (lesion studies), David Ferrier proposed that visual function was localised to the parietal lobe of the brain in 1876.[4] In 1881, Hermann Munk more accurately located vision in the occipital lobe, where the primary visual cortex is now known to be.[4]

Biology of the visual system

The eye is a complex biological device. The functioning of a camera is often compared with the workings of the eye, mostly since both focus light from external objects in the field of view onto a light-sensitive medium. In the case of the camera, this medium is film or an electronic sensor; in the case of the eye, it is an array of visual receptors. With this simple geometrical similarity, based on the laws of optics, the eye functions as a transducer, as does a CCD camera. 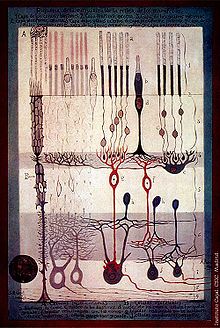 The retina consists of a large number of photoreceptor cells which contain particular protein molecules called opsins. In humans, two types of opsins are involved in conscious vision: rod opsins and cone opsins. (A third type, melanopsin in some of the retinal ganglion cells (RGC), part of the body clock mechanism, is probably not involved in conscious vision, as these RGC do not project to the lateral geniculate nucleus (LGN) but to the pretectal olivary nucleus (PON).[5]) An opsin absorbs a photon (a particle of light) and transmits a signal to the cell through a signal transduction pathway, resulting in hyperpolarization of the photoreceptor. (For more information, see Photoreceptor cell).

Rods and cones differ in function. Rods are found primarily in the periphery of the retina and are used to see at low levels of light. Cones are found primarily in the center (or fovea) of the retina.[citation needed] There are three types of cones that differ in the wavelengths of light they absorb; they are usually called short or blue, middle or green, and long or red. Cones are used primarily to distinguish color and other features of the visual world at normal levels of light.[citation needed]

In the retina, the photoreceptors synapse directly onto bipolar cells, which in turn synapse onto ganglion cells of the outermost layer, which will then conduct action potentials to the brain. A significant amount of visual processing arises from the patterns of communication between neurons in the retina. About 130 million photoreceptors absorb light, yet roughly 1.2 million axons of ganglion cells transmit information from the retina to the brain. The processing in the retina includes the formation of center-surround receptive fields of bipolar and ganglion cells in the retina, as well as convergence and divergence from photoreceptor to bipolar cell. In addition, other neurons in the retina, particularly horizontal and amacrine cells, transmit information laterally (from a neuron in one layer to an adjacent neuron in the same layer), resulting in more complex receptive fields that can be either indifferent to color and sensitive to motion or sensitive to color and indifferent to motion.[citation needed] Mechanism of generating visual signals: The retina adapts to its change in light through the use of the rods. In the dark, the retinal has a bent shape called cis-retinal. When light is present, the retinal changes to a straight form called trans-retinal and breaks away from the opsin. This is called bleaching because the purified rhodopsin changes from violet to colorless in the light. In the dark, the rhodopsin absorbs no light therefore releasing glutamate cells which inhibit the bipolar cell. This inhibits the release of neurotransmitters to the ganglion cell. In the light, glutamate secretion ceases which no longer inhibits the bipolar cell from releasing neurotransmitters to the ganglion cell and therefore an image can be detected.[6][7]

The final result of all this processing is five different populations of ganglion cells that send visual (image-forming and non-image-forming) information to the brain:

A 2006 University of Pennsylvania study calculated the approximate bandwidth of human retinas to be about 8960 kilobits per second, whereas guinea pig retinas transfer at about 875 kilobits.[8]

In 2007 Zaidi and co-researchers on both sides of the Atlantic studying patients without rods and cones, discovered that the novel photoreceptive ganglion cell in humans also has a role in conscious and unconscious visual perception.[9][10][11] The peak spectral sensitivity was 481 nm. This shows that there are two pathways for sight in the retina – one based on classic photoreceptors (rods and cones) and the other, newly discovered, based on photoreceptive ganglion cells which act as rudimentary visual brightness detectors.

In the visual system, retinal, technically called retinene1 or "retinaldehyde", is a light-sensitive retinene molecule found in the rods and cones of the retina. Retinal is the fundamental structure involved in the transduction of light into visual signals, i.e. nerve impulses in the ocular system of the central nervous system. In the presence of light, the retinal molecule changes configuration and as a result a nerve impulse is generated.[citation needed] 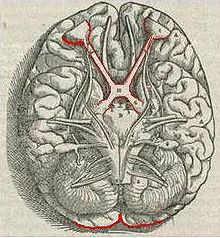 The information about the image via the eye is transmitted to the brain along the optic nerve. Different populations of ganglion cells in the retina send information to the brain through the optic nerve. About 90% of the axons in the optic nerve go to the lateral geniculate nucleus in the thalamus. These axons originate from the M, P, and K ganglion cells in the retina, see above. This parallel processing is important for reconstructing the visual world; each type of information will go through a different route to perception. Another population sends information to the superior colliculus in the midbrain, which assists in controlling eye movements (saccades)[12] as well as other motor responses.

A final population of photosensitive ganglion cells, containing melanopsin, sends information via the retinohypothalamic tract (RHT) to the pretectum (pupillary reflex), to several structures involved in the control of circadian rhythms and sleep such as the suprachiasmatic nucleus (SCN, the biological clock), and to the ventrolateral preoptic nucleus (VLPO, a region involved in sleep regulation).[13] A recently discovered role for photoreceptive ganglion cells is that they mediate conscious and unconscious vision – acting as rudimentary visual brightness detectors as shown in rodless coneless eyes.[9] 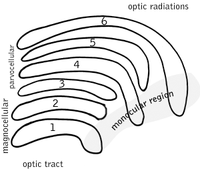 Six layers in the LGN

The lateral geniculate nucleus (LGN) is a sensory relay nucleus in the thalamus of the brain. The LGN consists of six layers in humans and other primates starting from catarhinians, including cercopithecidae and apes. Layers 1, 4, and 6 correspond to information from the contralateral (crossed) fibers of the nasal visual field; layers 2, 3, and 5 correspond to information from the ipsilateral (uncrossed) fibers of the temporal visual field. Layer one (1) contains M cells which correspond to the M (magnocellular) cells of the optic nerve of the opposite eye and are concerned with depth or motion. Layers four and six (4 & 6) of the LGN also connect to the opposite eye, but to the P cells (color and edges) of the optic nerve. By contrast, layers two, three and five (2, 3, & 5) of the LGN connect to the M cells and P (parvocellular) cells of the optic nerve for the same side of the brain as its respective LGN. Spread out, the six layers of the LGN are the area of a credit card and about three times its thickness. The LGN is rolled up into two ellipsoids about the size and shape of two small birds' eggs. In between the six layers are smaller cells that receive information from the K cells (color) in the retina. The neurons of the LGN then relay the visual image to the primary visual cortex (V1) which is located at the back of the brain (caudal end) in the occipital lobe in and close to the calcarine sulcus. The LGN is not just a simple relay station but it is also a center for processing; it receives reciprocal input from the cortical and subcortical layers and reciprocal innervation from the visual cortex.[citation needed]

There is a direct correspondence from an angular position in the field of view of the eye, all the way through the optic tract to a nerve position in V1. At this juncture in V1, the image path ceases to be straightforward; there is more cross-connection within the visual cortex. 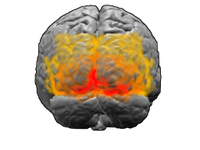 The visual cortex is the largest system in the human brain and is responsible for processing the visual image. It lies at the rear of the brain (highlighted in the image), above the cerebellum. The region that receives information directly from the LGN is called the primary visual cortex, (also called V1 and striate cortex). Visual information then flows through a cortical hierarchy. These areas include V2, V3, V4 and area V5/MT (the exact connectivity depends on the species of the animal). These secondary visual areas (collectively termed the extrastriate visual cortex) process a wide variety of visual primitives. Neurons in V1 and V2 respond selectively to bars of specific orientations, or combinations of bars. These are believed to support edge and corner detection. Similarly, basic information about color and motion is processed here.[16]

Along with this increasing complexity of neural representation may come a level of specialization of processing into two distinct pathways: the dorsal stream and the ventral stream (the Two Streams hypothesis,[17] first proposed by Ungerleider and Mishkin in 1982). The dorsal stream, commonly referred to as the "where" stream, is involved in spatial attention (covert and overt), and communicates with regions that control eye movements and hand movements. More recently, this area has been called the "how" stream to emphasize its role in guiding behaviors to spatial locations. The ventral stream, commonly referred as the "what" stream, is involved in the recognition, identification and categorization of visual stimuli.

However, there is still much debate about the degree of specialization within these two pathways, since they are in fact heavily interconnected.[18]