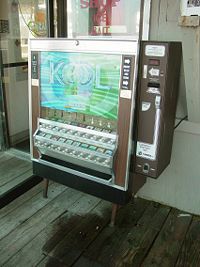 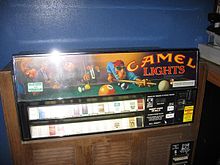 A cigarette machine is a vending machine that takes cash in payment for packets of cigarettes. Vending machines often dispense packs containing 16 or 18 cigarettes, although the dimensions of the packaging are the same as the equivalent pack containing 20.

In order to aid the restriction of sale of tobacco to minors, cigarette machines are regulated in many countries.

Since July 2008, in Japan machine companies could be prosecuted if tobacco is sold to anyone under 20 years old. To avoid such legal prosecution, Japan has introduced a government registered electronic smart card, called Taspo, that allows the user to purchase from the machines. To get a Taspo card, the purchaser must present their passport or ID to any government authorized business offering the service. The Fujitaka company is developing a technology that allows the vending machine to determine, using a digital camera and based on the facial wrinkles and sags of the potential buyer, whether the buyer is old enough to purchase cigarettes. The system compares facial characteristics including bone structure, sags, and crow's feet against a record of more than 100,000 people. However if the user fails they can still use the machine with a Taspo card.[1]

Bans and restrictions in Europe