The Book of Secrets

The Book of Secrets 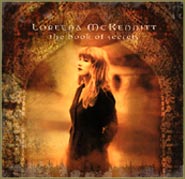 "The Book of Secrets" is an album by released in 1997. It reached #17 on the Billboard 200. [http://www.billboard.com/bbcom/retrieve_chart_history.do?model.chartFormatGroupName=Albums&model.vnuArtistId=85749&model.vnuAlbumId=986206] Its single "" was released during the winter of 1997-98, and peaked at #18 on the Billboard Hot 100, and #17 on the Modern Rock Tracks chart. [http://www.billboard.com/bbcom/retrieve_chart_history.do?model.vnuArtistId=85749&model.vnuAlbumId=986206] The album is certified double platinum in the US.

"Over a number of years spent ruminating on the distinctive characteristics of the , I began to wonder if their legendary nomadic ways arose from an inner need. An involuntary response, rather than a pragmatic one; a restlessness that had its roots in an insatiable curiosity."

"I suspect it was my growing awareness of my own wanderlust and curiosity that made me aware of the real sense of connection I felt to the Celtic lineage, as part of that extension of a people who ranged so astonishingly far and wide. And the more I learned of pan-Celtic culture and its unexpected turns and twists, the more I was drawn to learn about the Celts' contemporaries, which in turn set me off on tangents which might have little or no connection to the Celts themselves."

"In casting your inspirational net as an artist, you become familiar with the humility that comes with watching your best-laid plans veer sideways, and recordings becoming something other than what you expected. So, you set out to travel to ... and end up in Istanbul. You set off for ... and you end up on a train across . The journey, not the destination, becomes a source of wonder."

"In the end, I wonder if one of the most important steps on our journey is the one in which we throw away the map. In jettisoning the grids and brambles of our own preconceptions, perhaps we are better able to find the real secrets of each place; to remember that we are all extensions of our collective history."

"These songs have been assembled like a , with pieces collected and fitted in one by one. They are also the souvenirs that come of sifting through shards of history and scraping away layers to reveal the fragile past, as I saw in Italy at an archaeological site at where ancient Roman layers reveal even more ancient Etruscan layers, or at the burial site of a mysterious Celtic chieftain in ."

"My hope was that this recording might fuel curiosity in the same way as do the best books of travel stories. From all journeys, be they imaginative or geographic, the most important souvenirs to be collected are the reminders that people's lives are fortified by family and friends; by our ability to create our lives like creating a piece of art; and by our efforts to reconcile our material needs with the importance of our connections to each other." -- Loreena McKennitt, introduction to "The Book of Secrets"

All compositions by Loreena McKennit except as noted. [CD liner notes]

* "The Mummers' Dance" was produced into a video.
* "The Highwayman" is an adaptation of the poem by .