Cross-dressing in film and television

Cross-dressing in film and television 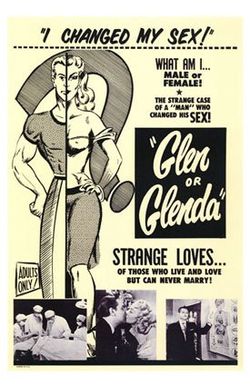 Film poster for Glen or Glenda

Cross-dressing in motion pictures began in the early days of the silent films. Charlie Chaplin and Stan Laurel brought the tradition of female impersonation in the English music halls when they came to America with Fred Karno's comedy troupe in 1910. Both Chaplin and Laurel occasionally dressed as women in their films. Even the beefy American actor Wallace Beery appeared in a series of silent films as a Swedish woman. The Three Stooges, especially Curly (Jerry Howard), sometimes appeared in drag in their short films. The tradition has continued for many years, usually played for laughs. Only in recent years have there been dramatic films in which cross-dressing was included, possibly because of strict censorship of American films until the mid 1960s. One early exception was the murderer, a transvestite who wears particularly frilly dresses and petticoats, in Alfred Hitchcock's British thriller Murder!.

As a central plot element

Movies that feature cross-dressing as a central plot element:

As a non-comedic element

Most of the above films are comedies. Films in which cross-dressing is treated in a more serious manner are relatively rare, although the list does include several dramas and biopics.

As a minor plot element

Many other comedy films include instances of humorous cross-dressing, but do not feature it as a central plot element. Movies in which cross-dressing plays a minor but important role include:

Milton Berle was one of the most famous early cross-dressing comedians in skits and such on his NBC shows from 1948 to 1956. Harvey Korman played a hefty Jewish mother character on The Carol Burnett Show. Flip Wilson created the memorable recurring character Geraldine Jones on The Flip Wilson Show. Some other comedy sketch shows, such as Monty Python's Flying Circus, Little Britain, The League of Gentlemen, Saturday Night Live and The Kids in the Hall routinely feature visual cross-dressing, with men dressing as women and speaking in falsetto. Not to be outdone in this regard, the (female) British team of French and Saunders have produced many sketches in which one or both of the actresses portray men. Rudy Giuliani appeared on Saturday Night Live dressed as a woman. 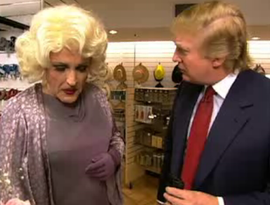 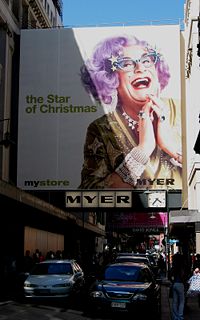 Dame Edna Everage featured on a billboard at the Myer department store in Melbourne. 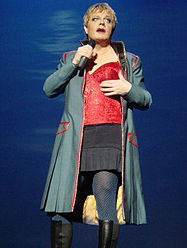