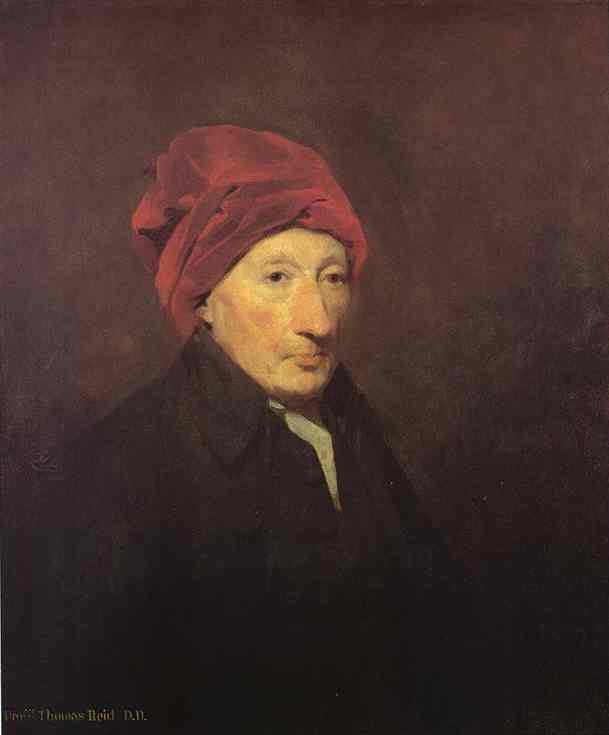 Thomas Reid (, – , ), Scottish , and a contemporary of , was the founder of the , and played an integral role in the . The early part of his life was spent in , , where he created the" 'Wise Club' "(a literary-philosophical association) and graduated from the . He was given a professorship at in 1752, where he wrote "An Inquiry Into the Human Mind on the Principles of Common Sense" (published in 1764). Shortly afterward he was given the prestigious Professorship of Moral Philosophy at the when he was called to replace . He resigned from this position in 1781.

Reid believed that (in a special philosophical sense of "sensus communis") is, or at least should be, at the foundation of all philosophical inquiry. He disagreed with Hume, who asserted that we can never know the what an external world consists of as our knowledge is limited to the ideas in the mind, and , who asserted that the external world is merely ideas in the mind. By contrast, Reid claimed that the foundations upon which our "sensus communis" are built justify our belief that there is an external world.

In his day and for some years into the 19th century, he was regarded as more important than .Fact|date=May 2008 He advocated , or common sense realism, and argued strongly against the Theory of Ideas advocated by , , and (in varying forms) nearly all Early Modern philosophers who came after them. He had a great admiration for Hume and asked him to correct the first manuscript of his (Reid's) "Inquiry."

His theory of knowledge had a strong influence on his theory of morals. He thought was an introductory part to practical ethics: When we are confirmed in our common beliefs by philosophy, all we have to do is to act according to them, because we know what is right. His moral philosophy is reminiscent of the Latin mediated by the , St. Thomas Aquinas and the Christian way of life. He often quotes , from whom he adopted the term "sensus communis"

He set down six axioms which he regarded as an essential basis for reasoning, all derived from "sensus communis":

*That the thoughts of which I am conscious are thoughts of a being which I call myself, my mind, my person;
*That those things did really happen that I distinctly remember;

Reid's own answer to Hume's testing problems, rather than Roy Sorensen's interpretation of it, was to back up his simple statement of denial with a justification of his principles of "common sense" ("sensus communis") by referring to the fact that any man who denied the principles was one with whom it was impossible to reason. In "The Intellectual Powers of Man" he states, “For, before men can reason together, they must agree in first principles; and it is impossible to reason with a man who has no principles in common with you.” One of the first principles he goes on to list is that “qualities must necessarily be in something that is figured, coloured, hard or soft, that moves or resists. It is not to these qualities, but to that which is the subject of them, that we give the name body. If any man should think fit to deny that these things are qualities, or that they require any subject, I leave him to enjoy his opinion as a man who denies first principles, and is not fit to be reasoned with.”

It has been claimed that his reputation waned after attacks on the by (although Kant was an exact contemporay of Reid's, and he was always complimentary about Scottish philosophy) and , but his was the philosophy taught in the colleges of North America, during the 19th century, and was championed by , a French philosopher. Justus Buchler showed that Reid was an important influence on the American philosopher , who shared Reid's concern to revalue common sense and whose work links Reid to . To Peirce, the closest we can get to truth in this world is a consensus of millions that something is so. Common sense is socially constructed truth, open to verification much like scientific method, and constantly evolving as evidence, perception, and practice warrant. By contrast, Reid's concept of a "sensus communis" is not a social construct but rather a precondition of the possibility that humans could reason with each other.

Reid's reputation has revived in the wake of the advocacy of common sense as a philosophical method or criterion by early in the 20th century, and more recently due to the attention given to Reid by contemporary philosophers, in particular those seeking to defend from philosophical attacks, such as and .

He wrote a number of important philosophical works, including "" (1764, Glasgow & London), "" (1785) and "" (1788). In 1844, praised Reid for explaining that the perception of external objects does not result from the raw data that is received through the five senses: