The Birds (Greek: Ὄρνιθες Ornithes) is a comedy by the Ancient Greek playwright Aristophanes. It was performed in 414 BCE at the City Dionysia where it won second prize. It has been acclaimed by modern critics as a perfectly realized fantasy[3] remarkable for its mimicry of birds and for the gaiety of its songs.[4] Unlike the author's other early plays, it includes no direct mention of the Peloponnesian War and there are few references to Athenian politics, and yet it was staged not long after the commencement of the Sicilian Expedition, an ambitious military campaign that had greatly increased Athenian commitment to the war effort. It is the longest of Aristophanes' surviving plays and yet it is a fairly conventional example of Old Comedy.

The Birds - the plot

Quick overview: Pisthetaerus, a middle-aged Athenian, persuades the world's birds to create a new city in the sky, thereby gaining control over all communications between men and gods. He is miraculously transformed into a bird-like figure and, with the help of his friends, the birds, and with advice from Prometheus, he soon replaces Zeus as the pre-eminent power in the cosmos.

Summary: The play begins with two middle-aged men stumbling across a hillside wilderness, guided by a pet crow and a pet jackdaw. One of them advises the audience that they are fed up with life in Athens, where people do nothing all day but argue over laws, and they are looking for Tereus, a king who was once metamorphosed into the Hoopoe, for they believe he might help them find a better life somewhere else. Just then a very large and fearsome bird emerges from a camouflaged bower, demanding to know what they are up to and accusing them of being bird-catchers. He turns out to be the Hoopoe's servant. They appease him and he returns indoors to fetch his master. Moments later the Hoopoe himself appears—a not very convincing bird who attributes his lack of feathers to a severe case of molting. He is happy to discuss their plight with them and meanwhile one of them has a brilliant idea—the birds, he says, should stop flying about like idiots and instead should build themselves a great city in the sky, since this would not only allow them to lord it over men, it would also enable them to blockade the Olympian gods in the same way that the Athenians had recently starved the island of Melos into submission. The Hoopoe likes the idea and he agrees to help implement it, provided of course that the two Athenians can first convince all the other birds. He calls to his wife, the Nightingale, and bids her to begin her celestial music. The notes of an unseen flute swell through the theatre and meanwhile the Hoopoe provides the lyrics, summoning the birds of the world from their different habitats—birds of the fields, mountain birds and birds of the trees, birds of the waterways, marshes and seas. These soon begin to appear and each of them is identified by name on arrival. Four of them dance together while the rest form into a Chorus.

On discovering the presence of men, the newly arrived birds fly into a fit of alarm and outrage, for mankind has long been their enemy. A skirmish follows, during which the Athenians defend themselves with kitchen utensils they find outside the Hoopoe's bower, until the Hoopoe at last manages to persuade the Chorus to give his human guests a fair hearing. The cleverest of the two Athenians, the author of the brilliant idea, then delivers a formal speech, advising the birds that they were the original gods and urging them to regain their lost powers and privileges from the johnny-come-lately Olympians. The birds are completely won over and urge the Athenians to lead them in their war against the usurping gods. The clever one then introduces himself as Pisthetaerus (Trustyfriend) and his companion is introduced as Euelpides (Goodhope). They retire to the Hoopoe's bower to chew on a magical root that will transform them into birds. Meanwhile the Nightingale emerges from her hiding place and reveals herself as an enchantingly feminine figure. She presides over the Chorus of birds while they address the audience in a conventional parabasis:

Hear us, you who are no more than leaves always falling, you mortals benighted by nature,
You enfeebled and powerless creatures of earth always haunting a world of mere shadows,
Entities without wings, insubstantial as dreams, you ephemeral things, you human beings:
Turn your minds to our words, our etherial words, for the words of the birds last forever![5]

The Chorus delivers a brief account of the genealogy of the gods, claiming that the birds are children of Eros and grandchildren of Night and Erebus, thus establishing their claim to divinity ahead of the Olympians. It cites some of the benefits the audience derives from birds (such as early warnings of a change in seasons) and it invites the audience to join them since birds easily manage to do things mere men are afraid to do (such as beating up their fathers and committing adultery).

Pisthetaerus and Euelpides emerge from the Hoopoe's bower laughing at each other's unconvincing resemblance to a bird. After discussion, they name the city-in-the-sky Νεφελοκοκκυγία (Cloudcuckooland) and then Pisthetaerus begins to take charge of things, ordering his friend to oversee the building of the city walls while he organizes and leads a religious service in honour of birds as the new gods. During this service, he is pestered by a variety of unwelcome visitors including a young versifier out to hire himself to the new city as its official poet, an oracle-monger with prophecies for sale, a famous geometer, Meton, offering a set of town-plans, an imperial inspector from Athens with an eye for a quick profit, and a statute-seller trying to peddle a set of laws originally written for a remote, barely-heard-of town called Olophyx. Pisthetaerus chases off all these intruders and then retires indoors to finish the religious service. The birds of the Chorus step forward for another parabasis. They promulgate laws forbidding crimes against their kind (such as catching, caging, stuffing, or eating them) and they end by advising the festival judges to award them first place or risk getting crapped on.

Pisthetaerus returns to the stage moments before a messenger arrives with a report on the construction of the new walls: they are already finished thanks to the collaborative efforts of numerous kinds of birds. A second messenger then arrives with news that one of the Olympian gods has sneaked through the defenses. A hunt is organized, the goddess Iris is detected and cornered and soon she wafts down under guard. After being interrogated and insulted by Pisthetaerus, she is allowed to fly off to her father Zeus to complain about her treatment. Hardly has she gone when a third messenger arrives, declaring that men in their multitudes are now flocking to join the new city-in-the-sky. Another set of unwelcome visitors arrives as advertised, singing because inspired by the new city. One is a rebellious youth who exults in the notion that here at last he has permission to beat up his father. The famous poet, Cinesias, is next, waxing incoherently lyrical as the poetic mood takes hold of him. Third is a sycophant in raptures at the thought of prosecuting victims on the wing. All of them are sent packing by the Pisthetaerus. Prometheus arrives next, sheltering under a parasol because he is an enemy of Zeus and he is trying not to be seen from the heavens. He has come with advice for Pisthetaerus: the Olympians are starving because men's offerings no longer reach them; they are desperate for a peace treaty but Pisthetaerus shouldn't negotiate with them until Zeus surrenders both his sceptre and his girlfriend, Sovereignty—she is the real power in Zeus's household. His mission accomplished, Prometheus departs just moments before a delegation from Zeus arrives. There are only three delegates: the brother of Zeus, Poseidon, the oafish Heracles and some even more oafish god worshipped by barbarians called Triballians. Pisthetaerus easily outwits Heracles, who in turn bullies the barbarian god into submission, and Poseidon is thus outvoted - the delegation accepts Pisthetaerus's terms. He is proclaimed king by a heavenly herald and he is presented with Zeus's sceptre by Sovereignty, a vision of loveliness. The festive gathering departs amid the strains of the wedding march: Hymen O Hymenai'O! Hymen O Hymenai'O!

When The Birds was performed in 414 BC, Athenians were still optimistic about the future of the Sicilian Expedition,[6] which had set out the year before under the joint command of Alcibiades, who had promoted it enthusiastically, and Athens' most experienced general, Nicias, who had opposed the venture. In spite of this public optimism, there was ongoing controversy in Athens over the mutilation of the hermai, an act of impious vandalism that had cast ominous doubts over the Sicilian Expedition even before the fleet had left port. The vandalism had resulted in a 'witch-hunt' led by religious extremists and endorsed by priests of the Eleusinian Mysteries, leading to the persecution of rationalist thinkers such as Diagoras of Melos.[7] Alcibiades himself was suspected of involvement in anti-religious activities and a state ship 'Salaminia' was sent to Sicily to bring him back to trial. However, he managed to escape from custody and a reward of one talent of gold was subsequently offered by the Athenian authorities to anyone who could claim responsibility for his death.[8] Alcibiades had already been a controversial figure in Athenian politics for some years before then - he had combined with Nicias to bring about the ostracism of the populist leader Hyperbolus. Hyperbolus was a frequent target of satire in Aristophanes' plays, a role previously filled by Cleon, who had died in 422.

Places and people mentioned in The Birds 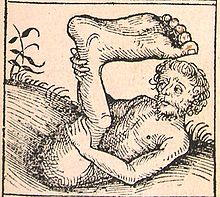 The Shadow Foots (Skiapodes): a mythical people, they are mentioned in The Birds only as the neighbours of a spooky Socrates (line 1553)

It has been argued that The Birds has suffered more than any other Aristophanic play from over-interpretation by scholars.[74] Political allegory featured prominently in nineteenth century interpretations: Cloudcuckooland could be identified with the Sicilian Expedition as an over-ambitious scheme, Athenians could then be identified with the birds, and their enemies with the Olympian gods. The twentieth century has also come up with allegorical interpretations—for example, Pisthetaerus has been interpreted as a metaphor for Alcibiades.[75] Cloudcuckooland has been understood by some scholars as a comic representation of an ideal polis and it has also been understood as a cautionary example of a polis gone wrong; according to yet another view, however, the play is nothing more than escapist entertainment.[76] Charecters: Beluga Jay! (Blue Jay)

The friendship between Pisthetaerus and Euelpides is realistically portrayed in spite of the unreality of their adventure. The keynote of their friendship is good-humoured teasing of each other for one another's failings (e.g. lines 54-5, 86-91, 336-42) and the proof of their friendship is the ease with which they work together in difficult situations, largely due to Euelpides' willingness to concede the initiative and leadership to Pisthetaerus. The father-son relationship between Philocleon and Bdelycleon in The Wasps and the husband-wife relationship between Cinesias and Myrrine in Lysistrata are other examples of Aristophanes' ability to depict humanity convincingly in the most unconvincing settings imaginable.

The Birds and Old Comedy

The Birds resembles all the early plays of Aristophanes in key aspects of its dramatic structure. Such resemblances are evidence of a genre of ancient drama known as Old Comedy. Variations from these 'conventions' are significant since they demonstrate either a trend away from Old Comedy, a corruption in the text or a unique dramatic effect that the author intended. Variations in this play are found in the following conventions: