For the civilian use of this facility, see Misawa Airport

Misawa is the only combined, joint service installation in the western Pacific. It houses three U.S. military services (Army, Navy, and Air Force), as well as the Japan Self-Defense Forces. The base is home to 5,200 US military personnel, as well as 350 US civilian employees and 900 Japanese national employees.

The Misawa Passive Radio Frequency space surveillance site was used for tracking satellites using the signals they transmit. It also provides coverage of geosynchronous satellites using the Deep Space Tracking System (DSTS) but has been dismantled around 2002. The Misawa Security Operations Center (MSOC), located in the northwestern part of the Air Base, is believed to be one of the largest ECHELON ground stations.

Misawa has scheduled civilian flights, making it one of the few joint civilian-military airports in the U.S. defense grid.

Both squadrons fly the Block 50 F-16C/D "Wild Weasels", and use the tail code of "WW" (before adopting the "WW" tail code, the code "MJ" (for Misawa, Japan) was carried.

The 35th Fighter Wing also serves as the host unit to a variety of other tenant units representing three U.S. military services and those of the Japan Air Self-Defense Force (JASDF). These units include:

What is now called Misawa Air Base has been used by the military since the Meiji period, when it was used as a cavalry training center for the Imperial Army.

In 1870 the Japanese Emperor established a stud farm for the household cavalry in the area that later became Misawa AB, and kept his own (Tenno Heika) cavalry there until 1931, when the Sino-Japanese conflict required their use in China. Misawa remained a training center for Japanese Cavalry until the Japanese Army constructed the first runway at Misawa for military aircraft in 1938.

Misawa Air Base was near the take-off site of the world's first non-stop trans-Pacific flight in 1931. Clyde Pangborn and Hugh Herndon took off from a gravel runway on the beach near Misawa in the aircraft known as "Miss Veedol" landing 41 hours later in Wenatchee, Washington thereby successfully crossing the Pacific Ocean. The runway is commemorated by a large sign in the coastal forest and is a popular beach and recreation area for Misawa AB personnel. The towns of Wenatchee, Washington and Misawa cemented their special relationship by becoming official sister cities in 1981 strengthening their friendship through annual cultural exchange programs.

The Imperial Army transformed Misawa into an air base in 1938 when it was used as a base for long-range bombers. By early 1941 the Gensan Flying Corps trained at Misawa. The base was taken over by the Imperial Navy Air Corps in 1942 when the 22d Imperial Naval Air Wg assumed control of the base and the mission was changed to research and development. In 1944, facilities were built for Kamikaze Special Attack forces.

Before the outbreak of World War II; Lake Ogawara at Misawa was used by the Imperial Japanese Navy to practice for the attack on Pearl Harbor. The lake was used because it was similar in depth to Pearl Harbor. The Japanese military fashioned hills near the shore of the lake to resemble the shapes of Battleships and Cruisers that were anchored in Pearl Harbor. This provided for a realistic view for their pilots from the air. The pilots conducted low level bombing runs, dropping torpedoes into the shallow depths of Lake Ogawara. This practice developed and refined the method to attack the ships that were anchored at Pearl Harbor. During World War II the Misawa area was heavily damaged (base 90 percent destroyed) by U. S. fighters and bombers.

The American occupation of Misawa began in September 1945. Misawa had to be almost completely reconstructed by occupying U.S. forces by Army engineers who restored the base for future use by the United States Army Air Forces. During the Korean War and Vietnam War Misawa supported fighter missions. The base was the launching point for clandestine surveillance overflights into China and the USSR during the 1950s.

After the immediate postwar reconstruction of facilities, the first permanent USAAF tenant was the 613th Air Control and Warning Squadron (613th AC&WS), taking up residence on July 15, 1946 and providing air traffic control in the Misawa area for the next decade.

The first operational fighter wing was the 49th Fighter-Bomber Group, being reassigned to Misawa on March 31, 1948. The 49th had three operational squadrons, the 7th, 8th and 9th, and flew the P-80 Shooting Star along with a few P-61 Black Widow night fighters. The 49th FBW performed occupation duties in Japan and took part in maneuvers and surveillance patrols as part of Far East Air Forces. In February 1950, the unit was redesignated as the 49th Fighter-Bomber Wing, with the group being its operational component 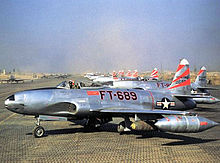 With the outbreak of the Korean War in June 1950, the 49th Fighter-Bomber Group was split off from the wing and was one of the first USAF units dispatched to Korea from Japan, its tactical squadrons began operations with F-51D Mustangs as the F-51D performed the ground support role better than the Shooting Stars. The group was rejoined with the wing in December 1950 when the Wing was reassigned to Taegu AB (K-2).

At Misawa, the 49th was replaced by the 6163d Air Base Wing to perform host and occupation duties. The 41st Fighter-Interceptor Squadron from the 35th FIW at Johnson AB was deployed to Misawa to provide air defense starting in September 1950, remaining until February 1951, being replaced by the 40th FIS also from Johnson AB, which remained until July. The 27th Fighter-Escort Wing was transferred from Taegu to Misawa in October, and remained at the base until January 20, 1953 to provide air defense flying straight-winged Republic F-84G Thunderjets which proved inadequate against the North Korean MiG-15s it encountered over Korean airspace.

The 49th Fighter-Bomber Wing was relieved from its duties in South Korea on November 7, 1953 and resumed its host duties at the base. It remained at Misawa until December 10, 1957, however its operational control of its squadrons and group came under the 39th Air Division on March 1, 1955.

On March 1, 1952 the 39th Air Division was established at Misawa, and through January 15, 1968, the Air Division controlled all of the units responsible for the air defense of north Japan, which included northern Honshū and Hokkaidō islands and the contiguous territorial waters.

Wings controlled by the 39th AD were:

Squadrons controlled by the 39th AD were:

In this role the 39th trained the assigned units and controlled aerial interception missions when Japanese air space was violated. The division also controlled air refueling and ECM missions, and trained personnel of the Japanese Air Self Defense Force in flying operations, radar operations and maintenance, and proper radio procedures.

After the Soviet Union shot down an RB-29 aircraft on November 7, 1954,[2] the 39th provided fighter escort for all friendly reconnaissance aircraft flying near Soviet territory and the Northern Air Defense Sector.

The division also supported combat operations during the Vietnam War.

The 31st Air Division was inactivated on January 15, 1968, and was replaced at Misawa by the 475th Air Base Wing. The operational squadron at the base was the 67th Tactical Fighter squadron, being deployed to Misawa from the 18th Tactical Fighter Wing based at Kadena AB, Okinawa. The 67th remained detached at Misawa until March 15, 1971 when the flight line was transferred to the United States Navy and all operational PACAF tactical fighter sorties ended.

The 6112th ABG took over the base host duties at Misawa in 1971, with the inactivation of the 475th ABW. For the next several years, Misawa was a non-flying PACAF base, with the 6112th performing administrative duties. The flight line was controlled by Naval Aviation units, with the JASDF operating from its own flight lines. The JASDF took over control of the airspace over Misawa on October 1, 1978.

During this period, the base hosted various Allied exercises in the region and the 6112th ABG provided support for 13 Air Force associated non-flying units, 14 DOD agencies and the JASDF units stationed in the Misawa area until September 1, 1982.

In 1983 Misawa was a major deployment site for rescue and recovery operations, following the downing of Korean Air Flight 007. 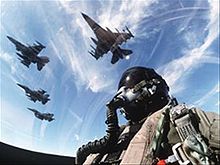 The 35th Fighter Wing was redesignated and reassigned October 1, 1994 when it inactivated at Naval Air Station Keflavik, Iceland and was reactivated the same day at Misawa where the wing assumed the missions and responsibilities previously performed by the 432nd Fighter Wing.

Near the 1995 new year, Misawa experienced two earthquakes—7.5 and 7.9 on the Richter scale at the epicenter off the coast of Hachinohe. On September 25, 2003 a magnitude 8.3 earthquake occurred off the east coast of Hokkaidō which was strongly felt in Misawa and all of Aomori Prefecture. Damage to Misawa Air Base was limited to burst water mains, cosmetic cracks in walls and personal property damage. There were no reports of damage to the base runway. This was the strongest earthquake reported by the U.S. Geological Survey (USGS) for 2003.

In recent years, Misawa Air Base and the Misawa Airport which connects directly to the base have experienced flight delays to both military and civilian aircraft. Since the base has only one runway, city planning officials and the Ministry of Land, Infrastructure and Transport have been researching new runway proposals to relieve the congestion a single, high traffic runway causes. Alpha and Bravo taxiways lie parallel to the runway and both are nearly the same length as the runway. Bravo taxiway has been the prime candidate for reconstruction into a second runway in recent years.

The Air Force found in April 2010 that 45% of service personnel at the base were overweight by Air Force standards and 13% considered obese.[3]

The base was slightly damaged by the March 2011 Tōhoku earthquake and tsunami. After the quake, personnel and aircraft from the base assisted with Operation Tomodachi. The base also served as an important hub for airlifted assistance during the disaster recovery efforts. During the crisis, around 1,400 American family members voluntarily departed the base for locations outside Japan.[4]

The Department of Defense operates several schools that serve the children of the American military and civilian personnel stationed at the base.[5]

Higher educational opportunities for those in the military and working for the Department of Defense, as well as for family members at Misawa are available through several contracted academic institutions. For example: