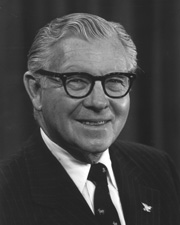 He was born in of Irish Catholic extraction, and attended . He worked as a for the , as a , a , and a r.

In 1927 he appeared on Broadway, partnering with his wife as a dance act. When Johnson decided to retire from show business in 1935, Murphy moved the family to , appearing in several musicals and comedies until 1952, notably among these were the Broadway Melody movies of 1938 and 1940. During he appeared in several patriotic s designed to increase morale in the U.S., including the 1943 movie "" in which he plays a thinly fictionalized version of .

In the 1950s, Murphy entered politics as chairman of the California Republican State Central Committee. In 1964 he was elected to the ; he defeated , who had been appointed several months earlier to serve the remainder of the late 's unexpired term. Murphy served from , to , . In 1968, he served as the chair of the National Republican Senatorial Committee. Murphy assumed his seat two days early, when Salinger resigned from the seat in order to allow Murphy to gain an edge in seniority. Murphy was then appointed by Gov. to serve the remaining two days of Salinger's term. He was an unsuccessful candidate for reelection in 1970, and subsequently moved to , where he died at the age of 89 from .

During his Senate term, Murphy suffered from throat cancer, forcing him to have his removed. He was unable to speak above a whisper for the rest of his life.

George Murphy was the subject of a song by satirist celebrating his appointment in which Lehrer declared in mock vaudeville style: "Oh, gee it's great, at last we've got a senator who can really sing and dance." Lehrer also alluded sarcastically to an infamous remark Murphy once made during a debate about the program that granted temporary work visas to Mexican migrant farmhands:

"Should Americans pick crops?
George says no;
'Cuz no one but a Mexican would stoop so low.
And after all, even in Egypt, the Pharaohs
Had to import—Hebrew" braceros.

Murphy had stated that Mexicans were genetically suited to farm labor; because they were "built lower to the ground", it was supposedly "easier for them to stoop". Oddly, some years earlier, in 1949, Murphy himself had starred next to Mexican actor in the film "", which cast the exploitation of the braceros in a negative light.

Murphy's move from the screen to politics paved the way for the successful transitions of actors such as and later . Indeed, Reagan's nascent rise was also pondered by an incredulous Lehrer, in the opening lines of the same 1965 song:

"Hollywood's often tried to mix
Show business with politics.
From
To. . . " Ronald Reagan ?

This connection is also referred to by folk singer on the track "Ringing of Revolution", when Ochs describes a fictional film based on that song, and Murphy is played by Reagan.

Not surprisingly, Ronald Reagan once famously referred to George Murphy as "...my " (in a political sense).