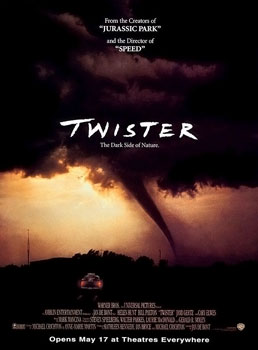 "Twister" is a starring and as storm chasers researching es. It was directed by . The film was based upon a script by and .

In the movie, a team of "s" try to perfect a data-gathering instrument, designed to be released into the funnel of a tornado, while competing with another better-funded team with a similar device during a across .

"Twister" is notable for being the first movie to be released on the DVD format [ [http://www.imdb.com/title/tt0117998/trivia Twister (1996) - Trivia ] ] and the last to be released on HD-DVD [ [http://hddvd.highdefdigest.com/releasedates.html HD DVD Disc Release Dates | High Def Digest ] ] . "Twister" has since been released in on .

Dr. Jonas Miller (): The leader of a rival storm-chasing team.

Laurence: (Jeremy Davies): A quiet member of the team, in charge of photographing and capturing a tornado on film.

Joey: (): In charge of taking measurements of wind and taking care of their doppler radar.

The film begins with a prologue set in 1969 on a rural Oklahoma farm, as severe weather looms. A family (including five-year old Jo) seeks shelter in a storm cellar as a tornado strikes; Jo's father is caught up in the storm and killed, as young Jo struggles to catch a glimpse of the powerful storm.

The main story begins with the reunion between Dr. Jo Harding, now an adult, and her estranged husband Bill Harding. Bill is a former weather researcher and storm chaser who has taken a job as a weather reporter. He is planning to marry his new girlfriend, Dr. Melissa Reeves and has arrived seeking Jo’s signature for the final divorce papers.

When they meet, Bill discovers that Jo has built DOROTHY, a research device that Bill designed to release hundreds of sensors into the center of a tornado to study its structure. He also meets up with Dr. Jonas Miller, a smug and unscrupulous (but well-funded) fellow meteorologist and storm chaser. When Bill discovers that Jonas has "invented" a device almost identical to DOROTHY, he vows to help Jo deploy DOROTHY before Miller can claim credit for his idea. Bill and Melissa join Jo and her eccentric team of storm chasers.

Tensions rise between Jo and Bill when they have several close calls with dangerous tornadoes as they try unsuccessfully to deploy the new device. One tornado hits head on, destroying the home of Jo's aunt Meg. Melissa, frightened by the dangers of storm chasing and recognizing the unresolved feelings between Jo and Bill, leaves.

The team then attacks their goal with even more fervor, chasing an increasingly-intense storm in an attempt to deploy DOROTHY. The rival team's hubris and lack of instinct proves fatal as their lead truck is caught up in a tornado due to overzealous chasing, despite Bill's warnings.

Eventually Jo and Bill set out on their own and, in a risky maneuver, are able to successfully deploy DOROTHY, surviving a direct contact with a huge tornado and re-sealing their personal bond in the process.

The film was a joint production between and . (This fact is reflected in the movies comprising a double-bill advertised on the marquee of the featured in the film: "The Shining", a Warner Bros. release, and "Psycho" a Universal owned production).

Although the movie takes place in , nearly half of the movie was filmed in .

A tanker truck involved in the final tornado bears the words "Benthic Petroleum". The company is the fictitious oil corporation from 's film .

In one tornado scene the storm chasers witness s being lifted into the air; this scene has been heavily parodied.

"Twister" featured both a traditional orchestral film score (by Mark Mancina) and several songs, including an instrumental theme song composed and performed for the film by . Both the rock soundtrack and the orchestral score were released on ; the orchestral score is considered a collector's item and is very difficult to find.Fact|date=May 2008 At least one piece of music used in the movie is not on the score. This music begins at the end of the first scene with Aunt Meg. It continues as she kisses everyone goodbye and the camera swoops over the Wakita water tower. It ends (changes to the Van Halen "Humans' Being" song) as the storm chasing team drives through the country.

Several songs used in the film were not included on the soundtrack including "Motherless Child" by (Dusty played the music video in his RV at the beginning of the film) and "Child in Time" by (played by Dusty when the team went to chase their second tornado in the film).

Working titles for the film were "Catch The Wind" and "Wind Devils".Fact|date=February 2007 The original tagline for the movie was "It Sucks", but the producers ultimately decided to go in a different direction, thinking that this tagline would provide critics with ammunition if they didn't like the movie. The tagline that was eventually agreed upon was "The Dark Side of Nature".Fact|date=February 2007

Sega Pinball released a machine based on the movie. [ [http://www.ipdb.org/machine.cgi?id=3976] ]

On May 21st, 1996, a tornado destroyed a in , which was scheduled to show the movie "Twister", in a real-life parallel to a scene in the film in which a tornado destroys a drive-in during a showing of the film "The Shining". [ [http://nl.newsbank.com/nl-search/we/Archives?p_product=BG&p_theme=bg&p_action=search&p_maxdocs=200&p_topdoc=1&p_text_direct-0=0EADDC4B7A93E4D0&p_field_direct-0=document_id&p_perpage=10&p_sort=YMD_date:D&s_trackval=GooglePM "TORNADO DESTROYS 'TWISTER" THEATER'] Boston Globe May 22nd, 1996. ] The facts of this incident were exaggerated into an that the theater was actually playing "Twister" during the tornado. Comedian claims he was on his way to see the movie at this St. Catharine's drive-in when the real thing hit. [ [http://www.snopes.com/movies/films/twister.htm "Twister"] - Snopes.com]

The film was used as the basis for the attraction "Twister...Ride It Out" at , which features filmed introductions by Helen Hunt and Bill Paxton.