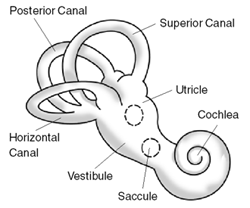 The labyrinth is a of fluid passages in the , including both the which is part of the , and the which provides the . It is named by analogy with the mythical maze that imprisoned the Minotaur, because of its appearance.

The vestibule is the region of the inner ear where the semicircular canals converge, close to the cochlea (the hearing organ). The works with the visual system to keep objects in focus when the head is moving. Joint and muscle receptors also are important in maintaining balance. The brain receives, interprets, and processes the information from these systems that control our balance.

Interference with or infection of the labyrinth can result in a syndrome of ailments called "". The symptoms of Labyrinthitis include temporary nausea, disorientation, vertigo, and dizziness. Labyrinthitis can be caused by viral infections, bacterial infections, physical blockage of the inner ear, or due to .