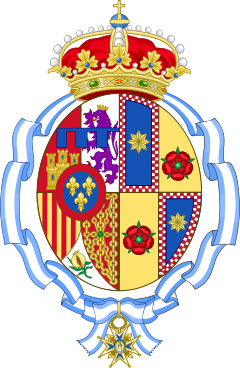 The personal coat of arms of the Princess of Asturias surrounded by the ribbon of the Spanish Order of Charles III. 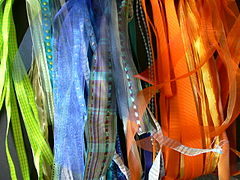 A ribbon or riband is a thin band of material, typically cloth but also plastic or sometimes metal, used primarily for binding and tying. Cloth ribbons, most commonly silk, are often used in connection with clothing, but are also applied for innumerable useful, ornamental and symbolic purposes. Cultures around the world use this device in their hair, around the body, or even as ornamentation on animals, buildings, and other areas. Ribbon is also sometimes used as a package sealer, on par with twine.

Ribbon for printers and typewriters

Typewriters and dot matrix printers use a cloth or plastic ribbon to hold the ink.

Along with that of tapes, fringes and other smallwares, the manufacture of cloth ribbons forms a special department of the textile industries. The essential feature of a ribbon loom is the simultaneous weaving in one loom frame of two or more webs, going up to as many as forty narrow fabrics in modern looms. To effect the conjoined throwing of all the shuttles and the various other movements of the loom, the automatic action of the power-loom is necessary; and it is a remarkable fact that the self-acting ribbon loom was known and extensively used more than a century before the famous invention of Cartwright. A loom in which several narrow webs could be woven at one time is mentioned as having been working in Dantzig towards the end of the 16th century. Similar looms were at work in Leiden in 1620, where their use gave rise to so much discontent and rioting on the part of the weavers that the states-general had to prohibit their use. The prohibition was renewed at various intervals throughout the century, and in the same interval the use of the ribbon loom was interdicted in most of the principal industrial centres of Europe. About 1676, under the name of the Dutch loom or engine loom, it was brought to London; and, although its introduction there caused some disturbance, it does not appear to have been prohibited. In 1745, John Kay, the inventor of the fly-shuttle, obtained, conjointly with Joseph Stell, a patent for improvements in the ribbon loom; and since that period it has benefited by the inventions applied to weaving machinery generally.

Ribbon-weaving is known to have been established near St. Etienne (dep. Loire) as early as the 11th century, and that town has remained the headquarters of the industry. During the Huguenot troubles, ribbon-weavers from St. Etienne settled at Basel and there established an industry which in modern times has rivalled that of the original seat of the trade. Krefeld is the centre of the German ribbon industry, the manufacture of black velvet ribbon being there a specialty. In England Coventry is the most important seat of ribbon-making, which is also prosecuted at Norwich and Leicester.

While satin and other sorts of ribbon have always been used in lingerie, the usage of ribbon in the garment industry, while subject to fashion trends, saw an upsurge in the mid to late 90's. This upsurge led to increased ribbon manufacturing as well as new and improved manufacturing techniques. Due to more competitive production rates, as well as past experience in this field, companies in the Far East - especially those in China - gradually secured themselves to be the major ribbon suppliers in the world and improved both the quality and the variety of their merchandise to match those of their established European and North American competitors.

Presently, the North American continent remains the largest importer of ribbon and ribbon derivative products (such as bows, rosettes, and other garment accessories made from ribbon). However, due to outsourcing of production of garments by North American garment manufacturers, countries in Asia and South America have started to contribute to the change of the statistical figures of ribbon imports.

Pieces of ribbon are used as symbols of support or awareness for various social causes and are called "awareness ribbons".

Ribbons are used in some ceremonies, such as in a ribbon cutting ceremony.

Ribbons also find use in gift wrapping, symbolic reference to the opening of a new event etc.