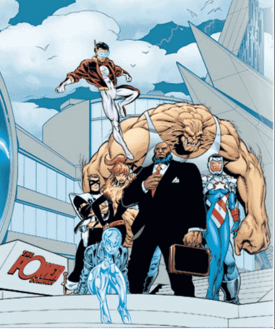 The Power Company was a team of professional superheroes-for-hire in the universe. The team, created by and , first appeared in "" 61, (February 2002). They subsequently starred in an epoynmous series that ran for eighteen issues, from April 2002 to September 2003, also written by Busiek.

Josiah Power was one of America’s best lawyers until his meta-gene was triggered during the alien Invasion by the activation of the Gene Bomb. [ [http://www.dcuguide.com/who.php?name=josiahpower The Unofficial Josiah Power Biography ] ]

Following the untimely public activation of his metagene in the , was dismissed from his . Power had little interest in becoming a traditional costumed hero, but it became readily apparent that he could not continue to practice law without undue public attention. He capitalized on his professional experience to organize a for-hire team of heroes much along the lines of a law firm. Their very first mission as a team was against the East Asian criminal organization known as the Black Dragon Society. They successfully defused a hostage situation initiated by the Society and returned to their base of operations.

The Power Company had several superpowered partners and associates, as well a support staff dedicated to day to day corporate operations. These included:

* - Managing Partner. Josiah is most likely the most powerful member of Power Company, but rarely accompanies the team in the field. The exact nature of his abilities have never been fully explored. Superman said he is one of the most powerful metas he's ever met. Josiah lives with his partner Rupe outside of San Francisco.
*Manhunter (Kirk DePaul) - Partner. A mercenary clone of Manhunter Paul Kirk. Now deceased, slain by Mark Shaw.
*Skyrocket (Celia Forrestal) - Partner. Skyrocket, a former officer who inherited the energy manipulating Argo Harness from her murdered parents. Skyrocket used the Argo Harness to become a respected hero, and was later recruited to enhance the credibility to the Power Company.
*Witchfire (Rebecca Carstairs) - Partner. A magic user, and popular entertainer star of film and pop s. Recently discovered that she was actually a plant based .

Other corporate superhero teams have been active in the universe. The most well known are the Conglomerate, the Blood Pack, and the Captains of Industry.