The museum collects, registers, maintains, researches in and handles Danish and foreign art dating from the 14th Century till the present day, mostly with their origins in western culture circles.

The collections of the Danish National Gallery originates in the Art Chamber (Danish: Kunstkammeret) of the Danish monarchs. When the German Gerhard Morell became Keeper of Frederick V's Art Chamber about 1750, he suggested that the king create a separate collection of paintings. To ensure that the collection was not inferior to those of other European royal houses and local counts, the king made large-scale purchases of Italian, Netherlandish and German paintings. The collection became particularly well provided with Flemish and Dutch art. The most important purchase during Morell's term as keeper was Christ as the Suffering Redeemer by Andrea Mantegna.

Since then a great variety of purchases have been made. During the 19th century the works were almost exclusively by Danish artists, and for this reason the Museum has an unrivalled collection of paintings from the so-called Danish Golden Age. That the country was able to produce pictures of high artistic quality was something new, and a consequence of the establishment of the Royal Danish Academy of Arts in 1754.

More recently, the collection has been influenced by generous donations and long-term loans. In 1928 Johannes Rump's large collection of early French Modernist paintings was donated to the Museum. This was followed by purchases of paintings and sculpture in the French tradition. 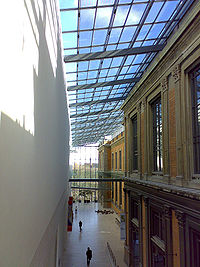 The meeting of the old and new buildings

The museum was designed by Vilhelm Dahlerup and G.E.W. Møller and built 1889-1896 in a Historicist Italian Renaissance revival style.

In autumn 1998, an extension was opened designed by the architects Anna Maria Indrio and Mads Møller from Arkitektfirmaet C. F. Møller. This new building was constructed in the park behind the original building and is connected to it by a glass-covered walkway, 'the street of sculptures'. The 'street' stretches along the full length of the museum, and within it concerts and dance performances are held.

The museum's collections constitute almost 9,000 paintings and sculptures, approx. 300,000 works of art on paper as well as more than 2,600 plaster casts of figures from ancient times, the middle-ages and the Renaissance. The major part of the museum's older collections comes from the art chambers of Danish kings. 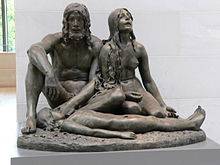 Carl Bonnesen's sculpture of Adam, Eve and a prostrate Abel. 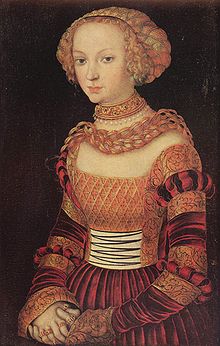 Portrait of a Young Lady by Lucas Cranach the Younger.

Modern art is a substantial part of the Royal Collection of Paintings and Sculpture. The collection is representative, not only of Danish art history, but also of foreign art which has influenced Danish artists. Thus the museum has a considerable collection of paintings by Emil Nolde and an important selection of American and German contemporary art.

The Royal Cast Collection consists of plaster casts of statues and reliefs from collections, museums, temples, churches, and public places throughout the world. It is currently put on disply in Vestindisk Pakhus on the waterfront, on Toldbodgade, half way between Langelinie and Amalienborg Palace. Here, you will find casts of sculptures from antiquity through to the Renaissance: Egyptian Kings and mythical beasts, Greek gods and human beings, Roman Emperors and scenes of battle and sacrifice. You will also find Christian imagery from medieval Romanesque/Norman and Gothic cathedrals. And the revival of the ideals of antiquity seen during the Renaissance is reflected in the works of Michelangelo - amply represented in this collection.

Parts of the Royal Cast Collection date back to the mid-18th century, where casts were used by art students in drawing classes at the newly established Academy of Fine Arts. During the period around the establishment of Statens Museum for Kunst in 1896, efforts to ensure the education and refinement of Danish citizens through classical art was the primary objective of the collection.

Today, the individual works of the collection are presented in close proximity to each other.

The Collection of Prints and Drawings contains about 300,000 works: copperprints, drawings, etchings, watercolours, lithographic works and other kinds of art on paper, dating from the 15th century to the present day. The first beginnings were made around the time of Christian II. In his diary from 1521 the German painter Albrecht Dürer says that he has given the King "the best pieces of all my prints".

Although the collection contains a great number of foreign works, Danish art makes the main part of the collection. Nowhere in the world can you get such a detailed and broad overview over Danish art on paper from the 17th century until the present day. Some works from the collection are shown in the permanent displays and special exhibitions of the Department and the others may be seen in the print room of the museum.