In elementary algebra, completing the square is a technique for converting a quadratic polynomial of the form

In this context, "constant" means not depending on x. The expression inside the parenthesis is of the form (x − constant). Thus one converts ax2 + bx + c to

and one must find h and k.

Completing the square is used in

In mathematics, completing the square is considered a basic algebraic operation, and is often applied without remark in any computation involving quadratic polynomials.

There is a simple formula in elementary algebra for computing the square of a binomial:

In any perfect square, the number p is always half the coefficient of x, and the constant term is equal to p2.

This quadratic is not a perfect square, since 28 is not the square of 5:

However, it is possible to write the original quadratic as the sum of this square and a constant:

This is called completing the square.

Given any monic quadratic

it is possible to form a square that has the same first two terms:

This square differs from the original quadratic only in the value of the constant term. Therefore, we can write

where k is a constant. This operation is known as completing the square. For example:

Given a quadratic polynomial of the form

it is possible to factor out the coefficient a, and then complete the square for the resulting monic polynomial.

This allows us to write any quadratic polynomial in the form

The result of completing the square may be written as a formula. For the general case:[1]

Relation to the graph 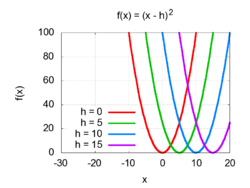 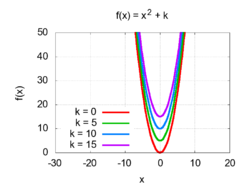 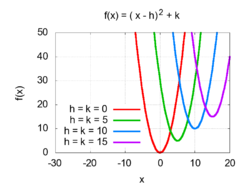 In analytic geometry, the graph of any quadratic function is a parabola in the xy-plane. Given a quadratic polynomial of the form

the numbers h and k may be interpreted as the Cartesian coordinates of the vertex of the parabola. That is, h is the x-coordinate of the axis of symmetry, and k is the minimum value (or maximum value, if a < 0) of the quadratic function.

Completing the square may be used to solve any quadratic equation. For example:

The first step is to complete the square:

Next we solve for the squared term:

This can be applied to any quadratic equation. When the x2 has a coefficient other than 1, the first step is to divide out the equation by this coefficient: for an example see the non-monic case below.

Unlike methods involving factoring the equation, which is only reliable if the roots are rational, completing the square will find the roots of a quadratic equation even when those roots are irrational or complex. For example, consider the equation

Equations with complex roots can be handled in the same way. For example:

For an equation involving a non-monic quadratic, the first step to solving them is to divide through by the coefficient of x2. For example:

For example, consider the integral

Completing the square in the denominator gives:

This can now be evaluated by using the substitution u = x + 3, which yields

where z and b are complex numbers, z* and b* are the complex conjugates of z and b, respectively, and c is a real number. Using the identity |u|2 = uu* we can rewrite this as

which is clearly a real quantity. This is because

As another example, the expression

where a, b, c, x, and y are real numbers, with a > 0 and b > 0, may be expressed in terms of the square of the absolute value of a complex number. Define

Consider completing the square for the equation

Simple attempts to combine the x2 and the bx rectangles into a larger square result in a missing corner. The term (b/2)2 added to each side of the above equation is precisely the area of the missing corner, whence derives the terminology "completing the square". [1]

A variation on the technique

As conventionally taught, completing the square consists of adding the third term, v 2 to

to get a square. There are also cases in which one can add the middle term, either 2uv or −2uv, to

to get a square.

Example: the sum of a positive number and its reciprocal

Consider the problem of factoring the polynomial