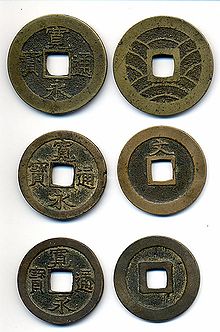 Kan'ei Tsūhō (寛永通宝) coins. The top ones were each worth 4 mon, the middle and bottom ones were worth 1 mon each.

Branched ("Edasen" 枝銭) Mon coins of the Kaei period. This shows the foundry technique to make the coins: the coins would then be clipped and filed to obtain the final round shape.

The mon (文?) was a currency of Japan from the Muromachi period in 1336, until 1870. The Chinese character for mon is 文 and the character for currency was widely used in the Chinese-character cultural sphere, e.g. Chinese wen and Korean mun. Coins denominated in mon were cast in copper or iron and circulated alongside silver and gold ingots denominated in shu, bu and ryō, with 4000 mon = 16 shu = 4 bu = 1 ryo. The yen replaced these denominations in 1870. However, its usage continued at least into 1871, as the first Japanese stamps, issued in that year, were denominated in mon.[1]

Mon coins were holed, allowing them to be strung together on a piece of string.

In 1695, the shogunate placed the Japanese character gen (元) on the obverse of copper coins.[2]

Through Japanese history, there were many different styles of currency of many shapes, styles, designs, sizes and materials, including gold, silver, bronze, etc. Even rice was once a currency, the koku.

Currencies with the same etymology