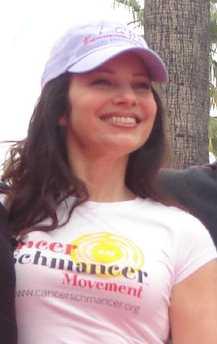 Francine Joy Drescher (born , ) is an and nominated American and actress and . She is famous for her nasal voice, laugh, hairline, and exaggerated Queens accent.

Drescher was born in , , to an ish family of origin (her grand grandmother was born in , ). [Drescher has stated that she is not of Italian descent, [http://home.frognet.net/~ritchie/fdchat5_00.htm] despite the numerous web sites that incorrectly report that she is part Italian; she is of Eastern European Jewish ancestry] She grew up in [Firestone, David. [http://query.nytimes.com/gst/fullpage.html?res=9E04E0DB113BF93BA2575AC0A962958260&scp=1&sq=%22fran+drescher%22+%22kew+gardens%22&st=nyt "For Queens, a Place in the Sun; Hollywood Is Suddenly Zooming In, With a Vengeance"] , "", , . Accessed , . "Ms. Drescher, who actually comes from Kew Gardens Hills, may be the most deliberately colorful of the lot, but she is hardly alone in celebrating the showbiz ascendancy of her native land."] with her parents Sylvia and Morty Drescher and was a studious girl who was popular in school. Drescher attended Hillcrest High School in , where she met her future husband, Peter Marc Jacobson, eventually marrying him in 1978, at age 21. [Meisler, Andy. [http://query.nytimes.com/gst/fullpage.html?res=9C02EED91F39F93BA25751C1A962958260 "TELEVISION; Mary Poppins She's Not"] , "", , . Accessed , . "After she graduated from Hillcrest High School in Queens, where she met Mr. Jacobson, the two of them moved to Los Angeles and were married."]

"The Nanny" and film roles

Drescher continued to play small but memorable roles in movies, until she and her husband finally created her own television show, "The Nanny" in 1993. She was visiting her friend, model , in England and came up with the plotline. The show aired on from 1993 to 1999, becoming an instant success, and Drescher became an instant star. In this , she played a charming and bubbly woman named who casually became the pantyhose-clad nanny of three children; with her wit and her charm, she endeared herself to their widower father Maxwell Sheffield, a stuffy, composed, proper British gentleman and a Broadway producer (played by British actor ).

Drescher's voice is a combination of a high nasal pitch and a accent that people find either annoying, endearing, or humorous (or all three). In her , Drescher discusses the fact that this is her real voice — even though it is played up a little on-camera — and discusses the many voice lessons she had to take to overcome it for movie auditions, only to have it, and her machine-gun titter, end up being her . Her first book is appropriately and humorously titled "Enter Whining".

Drescher married her highschool sweetheart, Peter Marc Jacobson, in 1978. Jacobson was Drescher's constant supporter in her show-business career, and he wrote, directed, and produced her signature television series, "". They divorced in 1999.

In January 1985, robbers ransacked Drescher's and Jacobson's Los Angeles and d her and a friend at gunpoint. It took her many years to overcome this ordeal, and it took her even longer to admit this to the press. She was paraphrased as saying in an interview with that although it was a traumatic experience, she found ways to turn it into something positive. In her book "Cancer Schmancer", the actress writes: "My whole life has been about changing negatives into positives." She saw her rapist sent to prison. [Fran Drescher speaks about her rape on Larry King, [http://transcripts.cnn.com/TRANSCRIPTS/0205/06/lkl.00.html] ]

After separating in 1996, Fran (who never had children) divorced her husband, Peter Marc Jacobson, in 1999. She then dated a man sixteen years her junior from 1998–2002. Her beloved dog, Chester, who made many appearances in her movies and on "The Nanny", died in 2000 at age eighteen. She now has a chocolate Pomeranian named Esther and lives in New York.

Drescher was admitted to 's on , , after doctors diagnosed her with . But emergency surgery caught it early as it was only at Stage 1 and she didn't have to undergo . She has been given a clean bill of health and no post-operative treatment has been ordered. She wrote about her experiences in her second book, "Cancer Schmancer".

On June 21, 2007, the day which marks her 7th anniversary of wellness, Drescher announced the national launch of the Cancer Schmancer Movement, a non-profit organization dedicated to ensuring that all women's cancers be diagnosed while in Stage 1, the most curable stage.

Fran says "we need to take control of our bodies, become greater partners with our physicians and galvanize as one to let our legislators know that the collective female vote is louder and more powerful than that of the richest corporate lobbyists." [Cancer Schmancer Movement Website http://www.cancerschmancer.org ] Her goal is to live in a time when women's mortality rates drop as their healthcare improves and early cancer detection increases. More information can be found on her website at [http://www.cancerschmancer.org cancerschmancer.org] .

In recent years, Drescher has made a return to television both with leading and guest roles. In 2005, she returned to TV with the sitcom "", in which she played Fran Reeves, a middle-aged mother of seven, living with Riley Martin (, ""), a guy half her age and not much older than her son. Former "Nanny" costar appears as her philandering ex-husband, Ted. "Living with Fran" was cancelled , , after two seasons.

In 2003, Drescher appeared in episodes of the short lived sitcom, "" as Roberta Diaz.

In 2006, Drescher guest starred in an episode of ""; the episode, "The War at Home", aired on US television on November 14, 2006 [TV.com - episode page, [http://www.tv.com/law-and-order-criminal-intent/the-war-at-home/episode/913601/summary.html?tag=ep_list;title;7] ] . In the same year, she also gave her voice to the role of the female golem in the episode "". In 2007, Drescher appeared in the US version of the Australian improvisational comedy series "Thank God You're Here". The program was cancelled after eight episodes.

On , , on 's video blog it was announced that Rosie and Fran would be doing a "fun, happy, family comedy" together. It is said to be called 'The New 30'.

On , , Fran went on "" to discuss the Obama/Clinton primary.

On , , Fran went on "" and discussed many different topics.