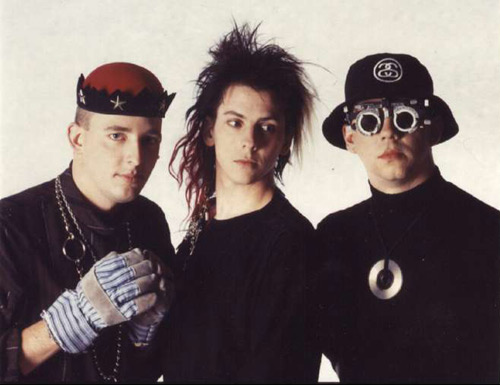 Past_members =
Christopher Anton
Murat Konar
Sonja Meyers| Information Society (also known as InSoc) is a U.S. band originally from , , primarily consisting of Kurt Larson (aka Kurt Valaquen/Kurt Harland), , and James Cassidy; the latter two reconvened the band in 2006, initially with as lead , then with Harland rejoining them as lead vocalist in 2007. Their breakout hit was 1988's "", a dance hit which included a sample of () from "", saying "pure energy," and opened with a sample of (), also from "Star Trek", saying, "It's worked so far, but we're not out yet!" They are known for their loyal fan base in , , and . Information Society became part of the American response to the Second British Invasion.

The band was formed in Kurt's dorm room in Dupre Hall at in , in 1982 [ [http://www.mnhs.org/collections/mplsmusic/band_histories.htm Minnesota Historical Society | Minneapolis Music Collection | Band Histories ] ] , and they performed with flourishes of hip-hop, dub, and electro. The name was chosen partly after Ingsoc, the term for British socialism in the dystopian novel . In 1983 they independently released two albums, "" and "." Two years later it released "Running," the group's first single, which became a hit popular in clubs and put them on the map. The song, a 7-minute excursion into electro-freestyle, was written and sung by , who left the band soon afterward. It was released on the Minneapolis-based label Twin-Tone Records, which was known for rock music rather than dance music. Its growing success led the group from its native to , and the ensuing revenues and contacts, as well as the addition of to the lineup. led the group to record its proper debut album for , which bought out the group's Twin-Tone contract because of its expertise in street-oriented music. Kramer left the band shortly after the second single "" was released. InSoc was also the only Tommy Boy act to have all of its albums released through major-label distribution channels rather than independent distribution, since the label, a former subsidiary of , had that option available to it throughout its years as a Warner subsidiary. In this case, Warner sub-label was the distributor. The groups 12-inch vinyl singles, however, were distributed through independent channels.

In addition to "What's on Your Mind (Pure Energy)," the group’s major release debut "Information Society" (1988) also produced another Top 10 Billboard hit in "", as well as a third single, the ballad "Repetition." The final single from the album was a cover of 's "."

The samples from "" were authorized for use on the album partially thanks to the efforts of , fan of the band and son of "Star Trek's" . The album sold out its initial pressing in 2 weeks in the . "Information Society" reached gold status after 5 months of its release and would eventually turn platinum. The disc was one of the few to use , which included digital graphics on the version in addition to the music. The graphics for the CD+G portion can be seen on the Information Society Website along with computer based information which has been included on other releases. The songs "What's On Your Mind (Pure Energy)" and "Walking Away" were used in a sampler disc bundled with the to showcase the console's CD+G capability, using the same graphics as the album.

The second release, "Hack" (1990), wasn't as successful, but had 2 top 40 hits with "Think" and "How Long." The album managed to sell quite well in late . were produced for those two tracks, but only "Think" got video ; the -directed spot for "How Long" was put aside as nobody involved was with it. A third single, "Now That I Have You", was remixed and sent out to DJs but was never released.

Kurt was also the owner of the heavily-modified ""-inspired named "Vector" featured on the cover of "Hack." The car sported a functioning , among other unusual features. "Vector" was eventually given to a friend at in .

The group’s third release, "" (1992), proved to be more powerful and critically acclaimed, although its label failed to do much to promote it, although it featured production by of the legendary electronic band . The first single, "Peace & Love Inc.," reached #1 on the Billboard Dance Chart. A was produced for the track, but declined to play it. The is also notable for being perhaps the first album ever produced to contain a track of tones, which, when played into a telephone connected to a computer, resulted in a bonus message from the band.

Five years later a fourth album, "Don't Be Afraid" (1997), was released. Written and performed by alone and produced by , DBA was more industrial-driven than previous and reflected more of what Kurt had been wanting to do during most of his tenure with InSoc. released the album, but—like Tommy Boy Records—did little to promote it. Harland's love of computer-related materials continued to be evident, as the album included a filled with bonus material, not yet a common occurrence in . The disc included a selection of samples used in the 's production, miscellaneous works of art by InSoc fans, a program to generate the distinctive border used on the album's cover, and the of "Peace and Love, Inc."

There was also a carefully-orchestrated digital culminating in the discovery of a bonus track called "." The scavenger hunt began with decoding a modem's signal recorded at the end of the audio CD, resulting in a text message from Kurt which pointed the way to a where the search began. There is also a cover included of 's "". Also included is "Ozar Midrashim", later used as the main theme for the videogame "". The album eventually went out of print, but it had a second release in a [http://www.informationsociety.us/2008/03/28/303/| remastered version] in 2008, this time with "" included as an audio track. So far, this release has only been available as digital media and not on CD or vinyl.

A album, "" (1999), was produced, featuring vocals to the band's earlier hits remixed by various artists. The vocals to songs pre-"Don't Be Afraid" were not the originals, they were new versions re-recorded by Kurt alone specifically for the remixers' use. Included on a bonus, unadvertised CD-ROM were digital copies most of the band's officially-produced promotional videos, including a copy of the "Peace and Love Inc." video of higher quality than that distributed with "Don't Be Afraid." This CD-ROM, however, did not feature the "How Long" video.

In 2004, released a compilation titled "". The release consisted of tracks from "Don't Be Afraid" and "InSoc Recombinant," supplemented with a slightly altered mix of "Are Friends Electric?" and two new remixes of "What's On Your Mind," one by , and one unattributed mix labeled "What's On Your Mind (Pure Energy)" which attempted to emulate the original Tommy Boy version of the track. Robb called the album "an insult to both the band and the fans." [http://www.amazon.com/dp/B0001MMGHC] . Harland, despite being credited as producer in the , had nothing to do with the release; and while declining to either "endorse or un-endorse" the album, he did take particular issue with the cover art, both for its low quality and for its portrayal of him holding a gun. [http://community.livejournal.com/insoc/16324.html?thread=49604#t49604]

The group was featured in an episode of 's in November 2004. As broadcast, it appeared that (host of the show) got every member to agree to reuniting. However, Kurt had declined to appear in the planned concert, for reasons he later detailed in [http://web.archive.org/web/20071230112756/http://insoc.org/texts/BandReunion.HTML a post on the band's official website] . The post also details his experiences behind the scenes of the production, and how they differ from the portrayals in the episode as broadcast.

In 2006, it was announced that and James Cassidy had decided to reconvene Information Society, initially without 's full participation in the recording process. [http://community.livejournal.com/insoc/53340.html] Harland's absence in the studio line-up was cited as being due to family and work obligations. Harland ultimately contributed lead vocals to one track, "Seeds of Pain."

The new lineup included Christopher Anton as lead vocalist and co-writer for several tracks from Oscillator and Synthesizer including the title track of the latter. They were also joined by Sonja Meyers who played additional keyboards and provided a return to female background vocals.

Anton and Myers performed live with Information Society throughout 2006-2007, including shows in California, Oregon, New York, New Jersey, and São Paulo, Brazil. By mid-2007, the band returned to its original lineup of Kurt, Paul and James, who performed on July 21, 2007 at the Freestyle Reunion 2 Concert at Madison Square Garden. After the release of "Synthesizer", the trio performed a series of concerts in Philadelphia, Seattle, San Francisco and Austin, TX. The concert in Philadelphia was filmed for a forthcoming DVD [http://dancing-ferret.com/isjangig.htm]

I Like the Way You Werk It was also remixed by LA-based indie promoter and electronica artist Jon Hershfield. The remix is titled Werk It V.2. Both Robb and Anton have been guests on Hershfield's internet radio program Isgoodmusic.com.

A.K.A. was a side project by Information Society's members & Mithat Konar. (Mithat Konar is not the same person as Murat Konar, who wrote and sang on Information Society's "Running". Mithat is his brother who also was a member of InSoc.) They only recorded 2 songs ("Cruel Lovin'" sung by Mithat, and "All You Ever Told Were Lies" sung by Kurt), both produced by Kurt. They released a few 12" Singles in 1988 and one CD in 1991. With the success of Information Society, this project died.

Information Society is a musical collective which has been recording and performing for over twenty-five years.

This is a list of everyone who has ever played with InSoc's live show, in order of appearance. [ [http://www.insoc.org/texts/Roster.HTML Information Society ] ]

Paul Robb cites his influences in earlier albums as hip-hop and , and he was integral to the early operations of . He went on to release solo material under the Think Tank name and was half of Brother Sun Sister Moon who later became known as Luminous. In addition to his ongoing work with Information Society, Robb is a composer for TV and film whose credits include "," "," and -winning commercials.

James Cassidy is a professor of soil Science at in .

Kurt Harland lives in , CA with his wife and son, and is the Audio Director for a video game production company. He remains the lead vocalist for Information Society and is also the lead singer of an unrelated group.