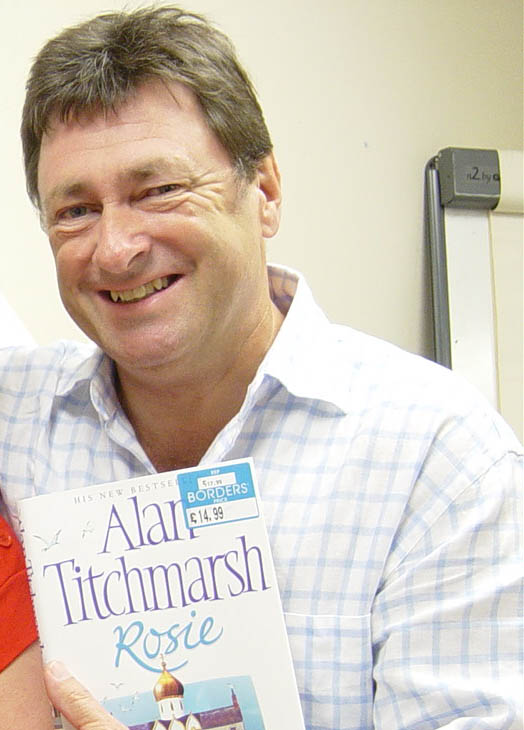 Alan Fred Titchmarsh, MBE DL (born 2 May 1949) is an English broadcaster, particularly famous in the field of programmes on UK , although Titchmarsh has also had lengthy stints presenting daytime and religious programming on and .

Titchmarsh was born in , , , the son of Bessie (nee Hardisty), a mill worker, and Alan Titchmarsh, Sr., a plumber. [ [http://www.telegraph.co.uk/portal/main.jhtml?view=DETAILS&grid=&xml=/portal/2007/07/14/nosplit/ftnick114.xml Family detective - Telegraph ] ] After leaving school aged 15, Titchmarsh went to work as an apprentice gardener with Ilkley Council in 1964, before leaving, in 1968 aged 18, for Art and Technology Institute to study for a City and Guilds in . Alan affectionately refers to as 'Percy Chucker' and credits him with inspiring him to take up gardening.Titchmarsh would go on to study at College of and for the National Certificate in Horticulture, before finally moving to the renowned to study for a Diploma in Horticulture.

Alan's latest volume of memoirs about his childhood, Nobbut A Lad, was recently published to great acclaimFact|date=April 2008, and his sixth novel, Love and Dr Devon, was released in August, 2006.

Alan Titchmarsh first few television appearances were on the long running BBC television show "Nationwide" as a horticulture expert. Titchmarsh admits "I suddenly tasted blood. It was - Wow!, I like this. I want to do more." This interest in television led to him being invited to present coverage of the for BBC television in 1983, something Titchmarsh has now hosted every year through to present (2008). Titchmarsh also appeared on other BBC shows, such as "" and "Open Air", again as either a guest presenter or as a gardening expert, providing commentary and answering viewers' questions.Fact|date=June 2007

In 1988, Titchmarsh was offered a slot on hosting a gardening show with called "House In A Garden",

Away from the gardening world, Titsmarsh has had spells presenting "", and a series of programmes on where he played a selection of light classical music, and more recently, hosting a BBC series, "". In recent years, his television and radio workload his lightened, presumably to allow Titchmarsh more time to concentrate on his growing career as a novelist and renewed interest in writing gardening books (see below).

Titchmarsh has also appeared in an advert for the Tourist Board in a series which included contributions from other Yorkshire-born celebrities including , , and Brian Turner, and occasionally does other voice over work for adverts. His recent voice over work has extended to voicing the title character in "", a cartoon series for the channel.

Titchmarsh has hosted a follow-up series to "British Isles - A Natural History" which is titled "" and focuses on British plant and animal species. The series has been broadcast in Autumn, 2007.

Other more recent various works include hosting a special edition of the "", entitled the "", which focused on modern collectibles, performing in the for the Queen's 80th birthday, and being guest host of "" while Paul was off for medical reasons. As of January, 2006 Alan has a permanent slot on from 6:30pm until 8:30pm on Sunday evenings named "Melodies for you" consisting of light classical and popular music, the show follows the traditional style of Sunday night broadcasting on .

As of June, 2007, Alan can also be seen hosting "The Great British Village Show", in which gardeners and cooks from all over Britain competed to be Britain's best at growing s, s and es, and at knitting, baking cakes and making jam.

In addition to writing around 40 gardening books, Titchmarsh has recently started writing fiction, and had his first novel, "Only Dad" published in November of 2001. A further five books have since been published (listed chronologically below).

One of his novels memorably won an award for the worst sex scene in a book.

Alan Titchmarsh lives in an old farmhouse in , and is married to Alison, with whom he has two daughters; also in the household are two dogs, golden s called Grace and Favour; two cats, Spud and Hector; and an assortment of chickens, ducks, goldfish and other livestock.Fact|date=June 2007 Their home has approximately convert|2|acre|m2 of , which Titchmarsh describes as a "north-facing hillside of chalk, clay and flint". Titchmarsh has a second home, a flat, on the where he keeps a small boat.

Titchmarsh is also a . In an interview with magazine, Titchmarsh said " is actually a very experience, as well as being a sensual one. I go to church every Sunday and it seems to me that there is a very strong link between and which come up, year after year. Gardening is also because you feel at one with everyone else."Speaking of his religion he said: "I realised that was the correct path when a vision came to me when I was making my own clock, I don't know whether it was the ping of the or the spring of the , but I just knew for certain from that point on, that wasn't for me"

Titchmarsh, in addition to his extensive television and writing work, is also trustee of his own charity, 'Gardens For Squats', and others, including 'Seeds For Bunning'. His own charity helps fund gardens and green spaces in and around schools, while Seeds For Africa encourages sustainable vegetable gardening. The charity provides community groups with the tools, seeds and training they require to start their own . This includes providing water installation and preparing the land. Away from horticulture, Titchmarsh is involved with the Cowes Inshore , where he's a patron, [ [http://www.cowesinshorelifeboat.org.uk/home.html Cowes Inshore Lifeboat, Registered Charity Number 1063407, Patron ~ Alan Titchmarsh] ] and with the where he is a trustee. [ [http://www.nmm.ac.uk/server/show/nav.3225 Trustees of the National Maritime Museum] ]

* His waxwork was added to in 2000 and is one of the most 'fondled'.Fact|date=October 2007
* He was voted #50 in 's "TV's 50 Greatest Stars"
* Has lectured to the Queen at a Woman's Institute lecture.Fact|date=October 2007
* Alan auditioned for , as the psychopathic gardener, although the producers decided Daniel Radcliffe was better suited for the part.
* Alan caused some uproar in the local media when he referred to as "England's Pancreas"
* His performance of the busy bee song was included exclusively on "Shit Week" on Dave.