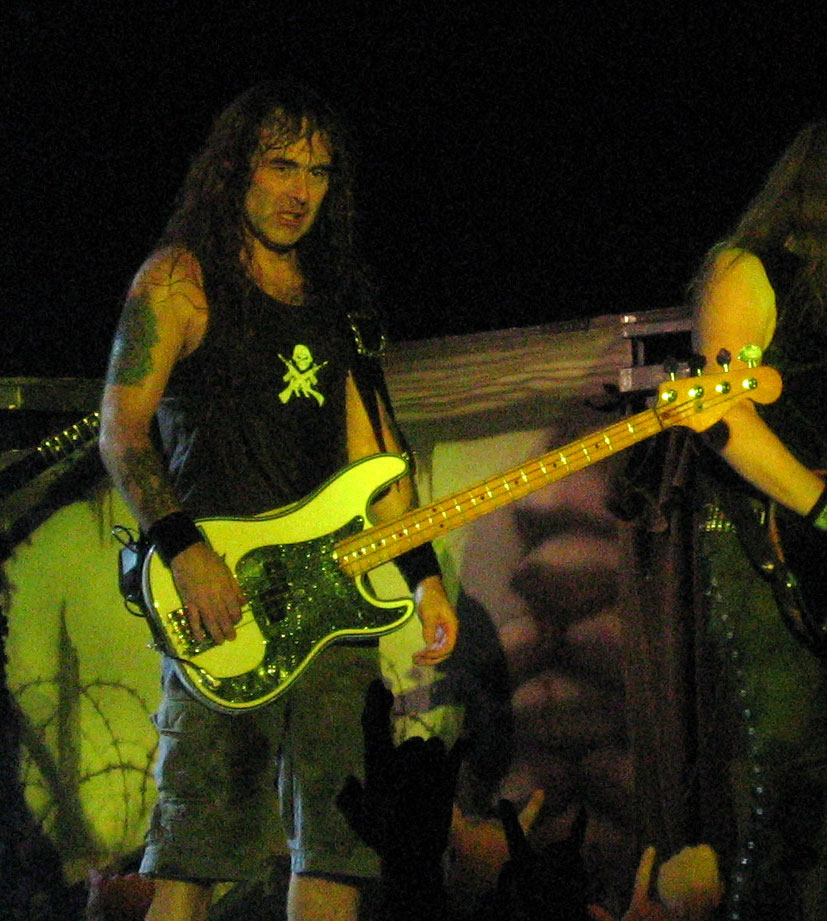 Stephen Percy Harris (born , in , , ) is the , band leader and primary of the heavy metal band . In addition, he plays , and sings . He founded the band as a teenager in 1975. He and Dave Murray are the only members of the band to have appeared on all of the band's albums, and Harris is the only member to remain in the band throughout its duration. He used to work as an architectural draftsman in the but gave up his job upon forming Iron Maiden. During the mid 1970s he was a youth team footballer for West Ham United. He still is a talented amateur football player and often has the crest of West Ham on his bass, [ [http://www.hardradio.com/shockwaves/maiden1.html Iron Maiden Interview ] ]

Harris is a self-taught bass player. His first bass was a copy of a that cost him £40 when he was 17 years old. He went on to use a signature Lado "Unicorn" model and an early 1970s Fender Precision with strings. He now uses his own signature RotoSound flatwound bass strings. The strings that Harris uses, SH77, have a brightness not usually associated with flatwound strings. The Bass has no Tone control and Steve taps his head or body to cue the tech for treble or bass adjustments.

Harris's influences include such bass players as of , of Yes, of Queen, of Genesis, of Rush, of Free and , of , of , John Paul Jones of and particularly from UFO.

Harris' first band was named first Influence then Gypsy's Kiss. He later joined Smiler, of which all the band members were several years older than he was. He ended up leaving, as the members of the band made it clear that they did not care for a who leapt around the stage and wrote songs. After Smiler, Harris went on to create , getting the name from seeing an iron maiden, a type of instrument, in the movie "The Man in the Iron Mask".

Steve Harris is often considered among the best and most influential heavy metal bassists. [Ranked "best bassist ever" in Classic Rock magazine, January 2000] He is most known for his "galloping" bass lines - usually an eighth note followed by two sixteenth notes at fast tempo (e.g., "The Trooper") or eighth note triplets – which he plays with two fingers. Before playing, Harris often chalks his fingers, to make these fast patterns easier to play, as shown on the bonus DVD for the "A Matter of Life and Death" album. Besides this he is very adventurous on the bass and plays intricate accompaniment in many of Maiden's songs. He also uses , which are unusual on bass, on several songs. Harris has also stated that he never uses a pick and that he never warms up before a show.

He plays a specially-painted bass guitar which has been featured on every album. The guitar has gone through three colour changes since construction. Originally black, it was then changed to blue, then white.

Steve Harris has been Iron Maiden's principal (other than at live shows and on a few songs where the work has been done by who doubles as his bass technician) since keyboards were first used by the band on the album "". Though since that album keyboards have played less of a role in Iron Maiden (usually), the complexity and speed of the playing has increased as Harris has improved. Initially he was not even credited for it in the band credits, just the album ones.

For the album "Somewhere in Time", Harris made his first experimentation with synthesised sounds, playing the (later on the "Seventh Son of a Seventh Son album" referred to as 'string synth'). He has also done so on subsequent albums, although it has not featured as much as it did on "Somewhere in Time" because of the band's less synthesised sounds and also the use of keyboards.

Steve Harris is also known for playing an increasing role in mixing Iron Maiden's albums as well as producing them, and has done the work himself since "Fear of the Dark". Harris also directs and edits many of the band's music videos, particularly live ones. He also owns a farm with music recording facilities. Harris' land has been used to write Maiden's albums on numerous occasions.

Harris has also contributed backing vocals on Iron Maiden records and concerts since the band's inception, though he is not always credited on the sleeves.

* Harris designed Iron Maiden's first logo which used the current "Maiden Font", seen in all of their album-releases, as stated in ""
* Given that Harris had been the centre of attention in Maiden's early gigs the addition of to the band's line-up originally caused small scuffles between the two as they both wanted to be at the centre of the stage. Bruce mentioned in "" documentary that Harris occasionally elbowed him away, and he returned the favour by causing Harris to trip on his extra-long microphone stand.
* His eldest daughter, , is also a singer and has released her debut album, Calm Before the Storm. She supported Iron Maiden on their "A Matter of Life and Death" tour as well as the Somewhere Back In Time World Tour. [ [http://www.ironmaiden.com/index.php?categoryid=8&p2_articleid=287 Iron Maiden Official Website - Lauren Harris joins Euro tour ] ]
* His son, George Harris plays lead guitar in a band called Burn In Reason ( [http://www.myspace.com/burninreason] ) who take a heavy influence from Iron Maiden, and also from bands such as , and .
* In 1998, Harris had a signature bass sold by Fender. It was the Steve Harris Signature P Bass. It has a basswood body coloured in lake placid blue, with a maple neck and Basslines pickups. It is no longer made and very hard to find.