Drama (Greek: Δράμα [ˈðrama]), the ancient Drabescus (Greek: Δράβησκος), is a town and municipality in northeastern Greece. Drama is the capital of the peripheral unit of Drama which is part of the East Macedonia and Thrace periphery. The town (pop. 42,501 in 2001) is the economic center of the municipality (pop. 55,632), which in turn comprises 53.5 percent of the prefecture's population. The next largest communities in the municipality are Choristi (pop. 2,625), Χiropótamos (2,601), Kalós Agrós (1,216), Kallífytos (1,083), and Koudoúnia (885).

Drama has excellent water resources and may well owe its name to Hydrama (Greek: "having to do with water"), a town which it is believed stood on the same site in ancient times. In the Roman era, Drabescus was a trade center and military camp on the Via Egnatia. Since the Middle Ages it has been known as Δράμα in Greek and Драма in Bulgarian. 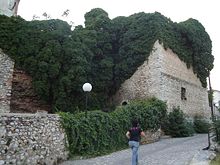 Part of the town's Byzantine walls.

In 1912 during the First Balkan War, Drama was taken from the Ottomans by Bulgarian troops. Subsequently, in 1913 as a result of the Treaty of Bucharest, following the Second Balkan War, it was incorporated into Greece along with the rest of Eastern Macedonia and Western Thrace.

Drama was occupied by Bulgarian troops from 1941 to 1944 during World War II.

The Drama uprising and the Drama massacre

On September 29, 1941, in response to local communist guerrilla attacks against the Bulgarians in the villages of Drama, the Bulgarian occupation forces applied harsh reprisals in Drama, Doxato and several villages like Choristi, Kyrgia, Koudounia and Prosotsani.[2]

The deportation of Drama's Jews 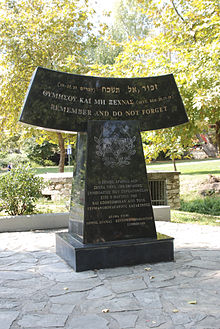 On March 4, 1943 after midnight, there was an action all over Thrace, including in the city of Drama. Bulgarian soldiers led by foot and freight trains all the 4,000 Jews in Thrace, including the 589 from Drama, into Bulgarian territory and assembled them in the tobacco warehouses that were empty this time of year. From there, the Jews were taken by train to the extermination camp of Treblinka. No one of the 589 Jews from Drama came back.[3][4] 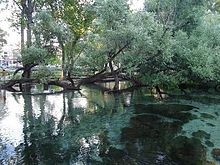 The springs of Agia Varvara.

In the recent past the economy of the Drama area relied heavily on the local paper and textile-clothing industries. However, these industries have either closed down or moved across the border to Bulgaria,[5] because of the low demands of the Bulgarian workforce,[6] with a negative impact on the local economy and employment. The situation worsened after 2007, when Bulgaria was admitted to the EU, and local Greek businessmen moved to expand their operations there. Other sources of revenue include agriculture, consisting mainly of tobacco plantations, small-scale mining (particularly of marble) and forestry. Recently, there have been efforts to exploit the rich local natural environment and to develop ecotourism.

The municipality Drama was formed at the 2011 local government reform by the merger of the following 2 former municipalities, that became municipal units (constituent communities in brackets):[7]

Corporation with other cities

Since 1978, Drama hosts a Short Film Festival. In 1987, the festival was recognized nationally. It which was included in 1996 in the National Cultural Network of Cities by the Greek Ministry of Culture.[8]

Two exceptional works of art in copperThe Archaeological Museum of Drama covers human presence in the prefecture of Drama from the mid Paleolithic Period (50,000 years before present) with traces of life from Paleolithic hunts in the caves of the source of the Angitis, up to modern times (1913).

The exhibition space consists of three main halls. In the first archaeological finds from the cave of Maara give witness to the presence of nomadic hunters in the area from the mid Palaeolithic period, while other finds show us about the life of settled farmers and animal rearers from Neolithic villages and the passage of the Copper Age in the city of Drama and the village of Sitagri. The reproduction of a Neolithic house with finds which describe the activities of Neolithic man and his daily activities is the main centre of interest for visitors of all ages.

Bust of Dionysius, found in the area of Kali Vrysi. The same hall continues the journey through time to the Iron Age and later years where the main element was the worship of Dionysius at the city of Drama itself and at Kali Vrysi and other areas of the prefecture. In the second hall architectural sculptures, pottery and coins confirm that life continued in the city and throughout the whole prefecture during early Christian, Byzantine and post-Byzantine years.

The visitor is taken through modem recent history by a photographic exhibition relating to the city of Drama, the towns of the prefecture and the mountain villages. The exhibition covers the period from the beginning of Turkish occupation up to the middle of the 19th century. In the third hall which is roofed with an atrium, the visitor can admire sculptures arranged into three thematic groups. The first includes architectural sculptures dating from ancient times up to Turkish occupation. The second contains votive monuments connected with the worship of various gods in the Greco-Roman pantheon as well as local deities, with particular reference to Dionysius while the third group of sculptures focuses on funerary monuments from Hellenistic and Roman times.

The history of the Christian Church in Drama began during the Byzantine period and underwent difficult and troubled times. From the 14th century when the city was captured by the Ottomans until the 20th century with successive foreign occupations, the Greek Orthodox Church in Drama struggled without end, fed by the blood of many faithful, martyrs to the faith and to the Hellenic ideal and provided succor to its followers through difficult periods.

The collection of icons dating from Byzantine times to the 20th century forms the basic core of the museum's exhibits. The Museum of the Cathedral of Drama, founded during the reign of the honourable Bishop Dionysius 1st, is now housed in a recently restored five-storey wing of the Bishop of Drama's palace on Venizelou St. In the spacious and well-attended halls, ecclesiastical treasures of priceless spiritual and artistic value are on exhibition. The Icons of the Virgin Ηοdegetria and the Blessing Lord from the 13th century, icons from the 17th century and particularly from the 19th century decorate and sanctify the place. Moreover, the episcopal canonicals, holy vessels and their covers, many from the 19th century, relics of Chrysostomos of Drama and Smyrni, constitute the most important exhibits in the museum.

Many of the exhibits are relics brought by refugees from Asia Minor and Pontus in 1922 from the churches of their ancient homes to their new home, valuable reminders of who they were and where they came from. Organized groups of pilgrims and visitors to the city are advised to contact the office of the Diocese of Drama before visiting the museum to make arrangements.