Duke Ferdinand of Brunswick
This article is about Frederick the Great's field marshal. For Ferdinand's nephew, see Karl Wilhelm Ferdinand, Duke of Brunswick-Luneburg.

Ferdinand, Prince of Brunswick-Lüneburg (12 January 1721, Wolfenbüttel – 3 July 1792, Brunswick), was a Prussian field marshal (1758–1766) known for his participation in the Seven Years' War. From 1757 to 1762 he led an Anglo-German army in Western Germany which successfully repelled French attempts to occupy Hanover.

The fortieth son of Ferdinand Albert II, Duke of Brunswick-Lüneburg, Ferdinand joined the Prussian army as a colonel in 1740. He was present in the battles of Mollwitz and Chotusitz. After Margrave Wilhelm of Brandenburg was killed at Prague in 1744, Ferdinand received command of Frederick the Great's Leibgarde battalion, and at the Battle of Soor (1745) he distinguished himself greatly, especially in the assault of a steep hill, that incidentally was defended by his older brother duke Louis Ernest of Brunswick-Lüneburg.[1] He took part in the Second Silesian War before leading part of the invasion of Saxony and Bohemia in 1756 during the Seven Years' War. He participated in the Battle of Rossbach, and then became commander of the allied Hanoverian army.

During ten years of peace, he was in the closest touch with the military work of Frederick the Great, who supervised the instruction of the guard battalion, and sought to make it a model of the whole Prussian army. Ferdinand was, moreover, one of the most intimate friends of the king, and thus he was peculiarly fitted for the tasks which afterwards fell to his lot. In this time, he was promoted to major-general and then lieutenant-general.

In the first campaign of the Seven Years' War, Ferdinand commanded one of the Prussian columns which converged upon Dresden, and in the operations which led up to the surrender of the Saxon army at Pirna (1756). At the Battle of Lobositz, he led the right wing of the Prussian infantry. In 1757, he distinguished himself at Prague, and served also in the Rossbach campaign.

Shortly after this, he was appointed to command the German Army of Observation which had been raised and funded by Britain to protect western Germany, but had recently failed to prevent the French Invasion of Hanover under the previous commander the Duke of Cumberland. Ferdinand accepted this appointment on the condition that he would have direct access to George II ruler of Hanover and Britain.[2] His new commission placed him in Hanoverian service, rather than Prussian or British. Despite this Frederick continued to communicate with him as though he were under his direct command. 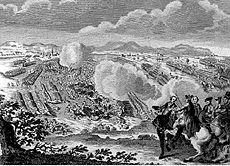 He found this army dejected by a reverse and a capitulation, yet within a week of his taking up the command, he assumed the offensive, and thus began the career of victory which made his reputation as a soldier. He tried to raise Hanoverian support for the war effort by highlighting various atrocities committed by French troops during their occupation.[3] By Spring 1758 he had driven the French out of Hanover and back across the River Rhine which gave him a reputation in Britain as a talented General, and helped boost support for British involvement in the German war. From June 1758, following the Capture of Emden, British troops arrived on the continent and directly added to Ferdinand's forces. The amount of British troops was increased throughout the war.

Offensive across the Rhine

Ferdinand followed up his success in driving the French back by crossing the Rhine himself as part of a fresh offensive. This caused alarm in France, as it was feared that a naval descent by large number of British reinforcements was intended to be co-ordinated with Ferdinand's advance, although the destination of the descent soon turned out to be St Malo in Brittany rather than the Low Countries. In spite of this Ferdinand still posed a insignificant threat and it was believed he was poised to attack the Austrian Netherlands or even northern Italy.

On 12 June 1758 he fought an indecisive Battle of Rheinberg before he won the Battle of Krefeld but could not easily maintain so advanced a position and fell back to the River Lippe.

He resumed a bold offensive in 1759, only to be repulsed at Bergen where he was defeated by France in the Battle of Bergen on 13 April 1759. Following the battle Ferdinand retreated in the face of a French advance, but managed to check them with a decisive victory at the Battle of Minden. This ended the immediate French threat to Hanover, as the French army was in no condition to continue its advance.

Villinghausen, Wilhelmsthal, Warburg and other victories attested the increasing power of Ferdinand in the following campaigns, and Frederick, hard pressed in the eastern theatre of war, owed much of his success in an almost hopeless task to the continued pressure exerted by Ferdinand in the west.

In promoting him to Field Marshal in November 1758, Frederick acknowledged his debt in the words, Je n'ai fait que ce que je dois, mon cher Ferdinand. After Minden, King George II of Great Britain gave the duke the order of the Garter, and the thanks of the British parliament were voted on the same occasion to the victor of Minden.

After the war, he was honored by other sovereigns, and he received the rank of field marshal and a regiment from the Austrians. During the War of American Independence, there was a suggestion, which came to nothing, of offering him the command of the British forces. He devoted most of the small income he received from his various offices and the rewards given to him by the allied princes to compensate those who had suffered in the Seven Years' War.

The estrangement of Frederick and Ferdinand in 1766 led to the duke's retirement from Prussian service, but there was no open breach between the old friends, and Ferdinand visited the king in 1772, 1777, 1779 and 1782. Ferdinand retired to Brunswick and his castle of Vechelde, where he occupied himself in building and other improvements. He became a patron of learning and art, and a great benefactor of the poor. He died on 3 July 1792.

The merits, civil and military, of the prince were recognized by memorials not only in Prussia and Hanover, but also in Denmark, the states of western Germany and England. The Prussian memorials include an equestrian statue at Berlin 1863.