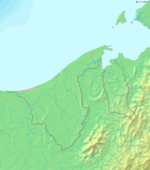 The climate in Brunei is tropical equatorial and humid subtropical at higher altitudes with heavy rainfall. Bandar Seri Begawan's climate is tropical equatorial with two seasons. Dry season is extremely hot (24 to 36 °C / 75.2 to 96.8 °F. Wet or rainy season is generally warm and wet (20 to 28 °C / 68 to 82.4 °F). Most of the country is a flat coastal plain with mountains in the east and hilly lowland in the west. The lowest point is at sea level and the highest is Bukit Pagon (1,850 m/6,070 ft).

Land boundaries: 381 km (all with Malaysia

Natural hazards: typhoons, earthquakes, and severe flooding are quite rare. Brunei is located at the Pacific Ring of Fire with Earthquakes regions. /

Environment - international agreements:
party to: Endangered Species, Law of the Sea, Ozone Layer Protection, Ship Pollution
signed, but not ratified: none of the selected agreements