The Outlet Company was a corporation based in Providence, Rhode Island, which owned holdings in both retail and broadcasting. The centerpieces of the group was its flagship Providence store (The Outlet) and WJAR radio and television, also in Providence. 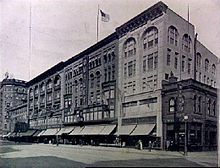 The Outlet Company was formed in 1891 when opened brothers Joseph and Leon Samuels opened a department store at 176 Weybosset Street in downtown Providence. Known as The Outlet, it quickly became a Providence landmark to the point of occupying an entire city block and attracting shoppers from all over southern New England. For decades, the store remained strong with its sole flagship location and dominated the field of retail in not only Providence, but Rhode Island as a whole.

With the changing field of retail in the mid-20th Century, the company diversified with opening suburban locations as well as buying some existing stores such as Philadelphia-based Phillipsborn and Bedya, the midwestern Hughes & Hatcher chain, and The Edw. Malley Co. department store chain in New Haven, Connecticut. However, the allure of building a broadcasting empire under the leadership of company president Bruce Sundlun led Outlet to leave the retail business in November 1980. In 1981, the Outlet Company sold the original downtown retail store (and other stores) to United Department Stores and the flagship Outlet location on Weybosset Street was shuttered in 1982. The building was destroyed by fire on October 16, 1986.[1]

Along with retail, Outlet saw a mass expansion into broadcasting in the 1960s and beyond. After the sale of the retail divisions, the company went into a failed merger attempt with Columbia Pictures before it was sold in 1984 to members of the Rockefeller family. Two years later, the company was sold again[3] to a combination of Outlet executives and venture capitalists who renamed the company to Outlet Communications and began a complete withdrawal from radio followed by a slimming down the number of their TV stations to three. In early 1996, Outlet and its three stations (plus control of two others) were sold to NBC; the name lived on as a license name of their former stations for a while afterward.

After ten years, all three stations were put up for sale by NBC on January 9, 2006, with Media General buying the stations on April 6, 2006 (the sale was finalized on June 26, 2006). [4] This virtually undid the NBC-Outlet merger of a decade earlier.

Note: Two boldface asterisks appearing following a station's call letters (**) indicate a station that was built and signed-on by the Outlet Company.

In 1994, Outlet bought a minority share into the startup company Fant Broadcasting, which in 1995 signed on two stations in Outlet markets which Outlet operated by local marketing agreements. Both of these stations were joint WB/UPN affiliates (primarily the former) under Outlet control.

Following its purchase of the remaining three Outlet staitons, NBC kept involvement with the Fant stations until they orchestrated a three way deal in which Fant sold itself to the original Viacom's Paramount Stations Group and, in return, NBC acquired Viacom/Paramount's WVIT in New Britain, Connecticut in 1997. Both stations later changed their primary affiliation to UPN, retaining the WB network as a secondary affiliation. WLWC and WWHO both became affiliates of the CW Television Network, the result of a merger of UPN and WB, in the Fall of 2006.