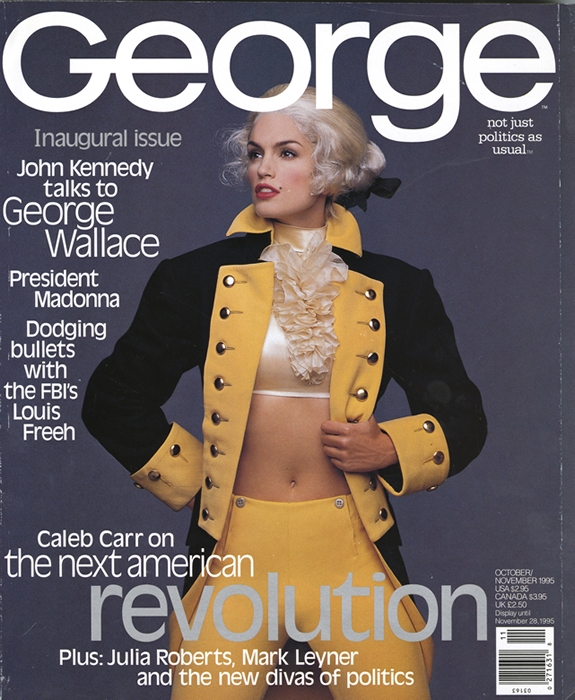 "George" was a glossy politics-as-lifestyle monthly magazine co-founded by and Michael J. Berman with publisher in New York City in September, 1995. Its tagline was "Not Just Politics as Usual". It was published from 1995 until 2001.

The debut issue featured a cover which received a great deal of attention for its photograph of dressed as .

"George" departed from the format of traditional political publications, whose audience was made up primarily of people in or around the political world. The general template for "George" was similar to magazines such as "Esquire" or "Vanity Fair". The consistent underlying theme was to marry the themes of celebrity and media with the subject of politics in such a way that the general public would find political news and discourse about politics more interesting to read.

When it first appeared, "George" attracted great interest, and for a brief period had the largest circulation of any political magazine in the nation, partly due to the celebrity status of Kennedy, but it soon began losing money. Kennedy later complained that the magazine was not taken seriously in the publishing world.

"George" earned infamy in the conspiracy cyberculture, when an article slated to run in the October 1998 "Conspiracy Issue" on the top conspiracy writers was killed at the last minute by George editors. Titled "Princes of Paranoia," it would have highlighted writers and websites that were popular in the field of conspiracy theory and given their work exposure to a wider audience.

After Kennedy's death in 1999, the magazine was bought out by Hachette Filipacchi Magazines

Critics called "George" "the political magazine for people who don't understand politics", assailing it for "stripping any and all discussion of political issues from its coverage of politics". In a feature in its final issue, "" asserted that the magazine's premise was flawed; there was no real convergence of politics and celebrity lifestyles.

On , , , via their , held a panel discussion entitled "Not Just Politics as Usual", which commemorated the tenth anniversary of the magazine's launch. The panel was moderated by and featured appearances by other journalists.

* John F. Kennedy Jr. appeared as one of 's many secretaries on the TV series of the same name, and gave her a copy of "George" with a mock-up of Murphy on the cover and a year subscription as a wedding present (despite learning before giving the present that the wedding had been called off), to which she was less than receptive.

* In an unexplored plot point of the pilot episode of "", the 'current' issue of George features fictional Deputy Chief-of-Staff on the cover. You can see the magazine on his desk during his character introduction. Later in the episode he signs the cover of the magazine for a female student who approaches him in a diner.

*On each issue's cover was hidden a tiny silhouetted head of as it appears on the US quarter—a nod, perhaps, to the tiny rabbit head that graces the cover of each issue of "".