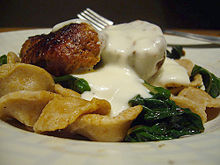 A Mornay sauce is a Béchamel sauce with shredded or grated cheese added. Usually, it consists of half Gruyère and half Parmesan cheese, though some variations use different combinations of Gruyère, Emmental cheese, or white Cheddar.[1]

It is often served with seafood or vegetables, and serves as a key ingredient in an authentic Hot Brown sandwich.

Which duc de Mornay, if any, is honored in sauce Mornay is debated: Philippe, duc de Mornay (1549–1623), Governor of Saumur, and seigneur du Plessis-Marly, writer and diplomat, is generally the favored candidate, but a cheese sauce at his table would have to have been based on what we would term a velouté sauce, for Béchamel had not been invented. Sauce Mornay does not appear in Le cuisinier Royal, 10th edition, 1820; perhaps sauce Mornay is not older than the great Parisian restaurant of the 19th century, Le Grand Véfour in the arcades of the Palais-Royal, where sauce Mornay was introduced.[2] In the tout-Paris of Charles X, the Mornay name was represented by two extremely stylish men, the marquis de Mornay and his brother, styled comte Charles; they figure in Lady Blessington's memoir of a stay in Paris in 1828–29, The Idler in France.[3] They might also be considered, when an eponym is sought for sauce Mornay.