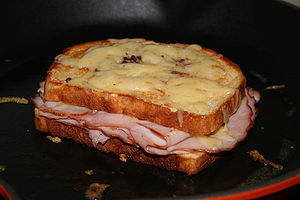 A croque-monsieur is a hot ham and cheese (typically Emmental or Gruyère) grilled sandwich. It originated in France as a fast-food snack served in cafés and bars. More elaborate versions come coated in a Mornay or Béchamel sauce.

The name is based on the verb croquer ("to crunch") and the word monsieur ("mister")—the reason behind the combination of the two words is unclear—and is colloquially shortened to croque. While the origins of the croque-monsieur are unknown, there are many speculations on how it was first created. The croque-monsieur's first recorded appearance on a Parisian café menu was in 1910.[1] Its earliest mention in literature appears to be in volume two of Proust's Remembrance of Things Past (À la recherche du temps perdu) (1918).[2] 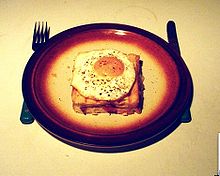 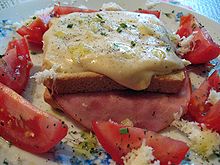 Chroque as served in Northern Germany since the 1970's, here without remoulade

A croque-monsieur served with a fried egg or poached egg on top is known as a croque-madame[3] (or in parts of Normandy a croque-à-cheval). The noted French chef Jacques Pepin also makes a version using chicken instead of ham,[4] which he demonstrated in the "Our Favorite Sandwiches"[5] episode on the PBS series (and its coordinating cookbook of the same title) Julia and Jacques Cooking at Home in which he worked with Julia Child. Many dictionaries[who?] attribute the name to the egg resembling an old fashioned woman's hat. According to the Petit Robert dictionary, the name dates to around 1960. The name croque-mademoiselle is associated with many different sandwiches, from diet recipes to desserts.[6] A ham and cheese sandwich snack, very similar to the croque-monsieur, is called a tosti in the Netherlands. A version of this sandwich in Spain replaces the ham with sobrassada, a soft sausage from the Balearic Islands that can be easily spread. In Catalonia it is known as a Bikini.[7]

Versions of the sandwich with substitutions or additional ingredients are given names modelled on the original croque-monsieur, for example: