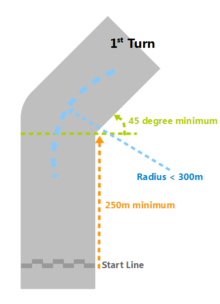 A race track (or 'racetrack', 'racing track' or 'racing circuit') is a purpose-built facility for racing of animals (e.g. horse racing or greyhound racing), automobiles, motorcycles or athletes. A race track may also feature grandstands or concourses. Some motorsport tracks are called speedways.

A racetrack is a permanent facility or building. Racecourse is an alternate term for a horse racing track, found in countries such as the United Kingdom, Australia, Hong Kong and the United Arab Emirates. Race tracks built for bicycles are known as velodromes. Circuit is a common abbreviation for racetrack, given the usual circuitous configuration of most race tracks, allowing races to occur over several laps.

A race course, as opposed to a racecourse, is a term for non-permanent tracks for sports, particularly road running, water sports, road racing or rallying. Many sports usually held on racetracks can also occur on temporary but purpose built tracks, such as the Monaco Grand Prix in Formula One. 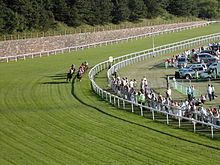 There is some evidence of racetracks being developed in several ancient civilizations, but the most impressive ancient racetracks were certainly the hippodromes of the Ancient Greeks and the circuses of the Roman Empire. Both of these structures were designed for horse and chariot racing. The stadium of the Circus Maximus in Rome, Italy, is an example that could hold 200,000 spectators.

Racing facilities existed during the Middle Ages and there are records of a public racecourse being opened at Newmarket in London in 1174. In 1780 the Earl of Derby created a horse-racing course on his estate at Epsom; the English Derby continues to be held there today. 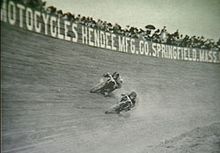 Motorcycles racing on a highly banked board track in 1911

With the advent of the automobile in the late 19th/early 20th century, racetracks were designed to suit the nature of powered machines. The earliest tracks were modified horse racing courses, and racing automobiles in these facilities began in September, 1896, at Narragansett Park in Cranston, RI. The Indianapolis Motor Speedway was opened in August 1909.

During the 1920s, many of the races on the AAA Championship were on high banked wooden race tracks called board tracks. 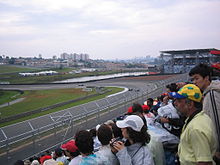 View of a Race Track from a Race Car at Wakefield Park, Australia

Racetracks are used for:

Some racetracks offer little in the way of permanent infrastructure bar the actual track, others incorporate spectator facilities such as grandstands, hospitality or facilities for competitors, such as pit lanes and garages, paddocks and stables. Several racetracks are incorporated into larger venues or complexes, incorporating golf courses, museums, hotels and conference centres. Some racetracks are small enough to be contained indoors, for sports such as motocross, cycling and athletics.

Many racetracks are multi-use, allowing different types of sport on the same track, or incorporating many tracks in one venue. Commonly running tracks are incorporated within general use or soccer stadiums, either permanently visible or covered by stands/pitches.

Many horse and motorsport tracks are configurable, allowing different routes or sections. Some venues contain smaller tracks inside larger ones, with access tunnels and bridges for spectators. Some racetracks incorporate a short course and a longer course which uses part of the shorter one, usually the main straight, such as Brands Hatch. The Le Mans road race venue is centred on a smaller permanent circuit within its complex. 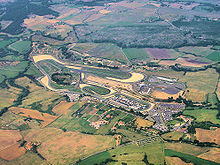 Some racetracks are of an oval shape, often banked[citation needed], which allows almost universal spectator views or high speed racing (cycling, stock cars), but are often criticised for lack of excitement; these predominate in North America. A famous one is Nardo where high-speed manufacturer testing often takes place, and of course Indianapolis Motor Speedway. Some oval tracks are variations on an oval shape, for practical reasons or to introduce varying difficulties such as Talladega (a tri-oval). Most racetracks have meandering circuits with many curves, chicanes and changes in height, to allow for a challenge in skill to the competitors, notably motocross and touring car racing - these tend to predominate throughout most of the world, but especially in Europe. 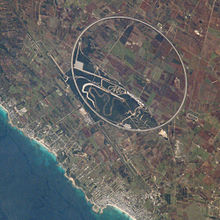 Space photograph of Nardò Ring in Italy. It is 12.5 kilometres (7.8 mi) long and is perfectly round - the image was taken on an angle making it appear elliptical.

Flatter meandering motorsport courses are sometimes called 'road circuits', originating in the fact that the earliest road racing circuits were simply closed-off public roads. True road circuits are still in use, e.g. the Australian GP has been run in Adelaide and continues to be in Melbourne on regular city streets. The most famous of these are the Monaco GP, and the Spa-Francorchamps circuit in Belgium. Some racetracks are specifically configured in a long straight, namely drag racing. Some races will be held only over the straight portion of a track (some horse racing and sprint athletics).

The boom in motorsport flared after WW2, when many airfields particularly in Great Britain were left without further use. The most famous British track - Silverstone - is one after being a WW2 Class A Airfield. The long runways were perfect for drag strips, and circuit layout usually creatively combined parts of the runways and the surrounding perimeter taxiway.