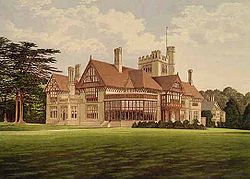 A picture of Cowdray Park published in 1880.

Cowdray Park is a country house at the centre of the 16,500-acre (67 km2) Cowdray Estate in Midhurst, West Sussex. The park lies in the South Downs National Park. The estate belongs to Viscount Cowdray, whose family have owned it since 1908. It is probably best known for Cowdray Park Polo Club, which is one of the leading polo clubs in the United Kingdom and the sport has been played here for over 100 years. Over 450 polo matches are held at the park each season and the highlight of the polo season is the annual Veuve Clicquot Gold Cup. It also offers many other leisure activities, such as a golf course, clay pigeon shooting and corporate activity days, as well as the more traditional activities of agriculture, forestry and property lets.

The estate also features the Cowdray Ruins - the former home of the Montague family, built in 1542 and largely destroyed by fire in 1793. In 2005 the Heritage Lottery Fund awarded a grant of £2.7m towards the cost of stabilising the ruins and they were opened to the public on 31 March 2007.[1]

The house is not open to the public.

In May 2009 it was announced that Lord Cowdray is seeking a business partner to turn the house into a country house hotel, and will be moving to another family property at Fernhurst.[2]