Hallescher FC is a German association football club based in Halle, Saxony-Anhalt. 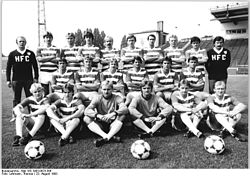 The club's roots are in the 1946 formation of SG Glaucha in Soviet-occupied East Germany around the core of Hallescher Fußball-Club Wacker which was founded in 1900. Wacker had participated in the playoff rounds for the German championship in 1921, 1928, and 1934, when it won the Gauliga Mitte.

As was common in the East at the time, the club would undergo frequent name changes, the first one was to SG Freiimfelde Halle in 1948. In the following year they won the eastern championship as ZSG Union Halle and repeated this success in 1952.

The last name change reflects the separation of football departments from their parent sports clubs all across East Germany, forming football clubs, as sports bureaucrats strove to build a powerful national football team. As BSG Turbine Halle the side won its first East German Cup in 1956, and a second one in 1962, this time as SC Chemie Halle. The club played in the premier DDR-Oberliga as a middling side, with the occasional lapse that would drop them to the second tier DDR-Liga. Their best result in this period was third place Oberliga finish in 1970–71 that earned them a first-round UEFA Cup appearance.

With German reunification in 1990, and the merger of the country's eastern and western leagues, the club entered the 2.Bundesliga as Hallescher FC. A steady decline followed that saw the club in Verbandsliga Sachsen-Anhalt (V) by the 1995–96 season. They play in NOFV-Oberliga Süd (IV) and promoted to Regionalliga Nord (IV) in 2007–2008 as champions.

Frequent name changes have been accompanied by frequent changes to the team logo. These are just some of the crests worn by Halle teams over the years.