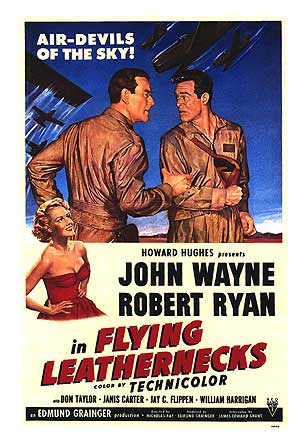 "Flying Leathernecks" is a 1951 action film directed by and starring . The movie details the exploits and personal battles of aviators during . Marines have long had the nickname "leatherneck," hence the title.

Tagline: "Air-Devils of the Sky!"

Major Dan Kirby () arrives to VMF-247 as the new commander while everybody in the unit was expecting Captain Carl "Grif" Griffin () to take his place. Kirby is strict with rules and makes it understood from day one. Assigned to the during the , Kirby has few planes available and a lot to accomplish in a field that is attacked daily by the Japanese. His pilots are young and behave like "kids," at times disobeying orders and foolishly losing their lives and precious planes. Kirby is requiring maximum effort, and Captain Griffin is not as tough as Kirby expects. Griffin stays closer to his young pilots. One of them is his own brother-in-law, Vern "Cowboy" Blithe (Don Taylor).

Kirby for his part hates the decisions he has to make and knows that he is sending his pilots to death, but the success of his missions is the most important thing to him. He keeps this as a secret from the rest of his squadron. The hard conditions of the war force Kirby to get all the more strict with his exhausted pilots. He even refuses sick leave to men with malaria or return to base when planes have technical problems. The tension between Griffin and Kirby soon comes to a head and they have a hard discussion. It is obvious to the viewer that Griffin does recognize the hardships Kirby faces, but he is often more driven by his sentimental trend.

Kirby is a fan of low-level ground attacks to support the marine units, but HQ has not approved of his tactics until the time comes when marine troops are dangerously stuck by the Japanese. Kirby then adjusts his squadron's tactics accordingly despite losing a number of pilots trying to prove his point. In his most successful operation, he leads his squadron in an attack on a huge Japanese convoy — a scenario most likely based on the Naval Battle of Guadalcanal.Promoted to Lt Colonel, Kirby is given the chance to organize the low level attack tactics in the States.

Kirby returns to the front and to the same unit and crew that is now equipped with the fighters. Kirby leads his men against Japanese troops and attacks during the . During a crucial moment in this battle, Griffin denies assistance to his brother-in-law to avoid splitting his formation; as a result his brother-in-law is killed. Kirby shortly after is shot down and injured but is picked up by a navy launch. Since he is now to leave the squadron, he has to appoint a successor. This time he appoints Griffin as CO of VMF-247, as he understands that Griffin is able to put the lives of his pilots second to duty. They split with a friendly promise to meet again. Kirby admits that every moment in which he is required to make a decision is a nightmare, but that comes with the territory of being a leader under these circumstances.

Throughout the film the character of Sgt Clancy (), an old marine veteran and friend in arms for Kirby, enhances nicely the scenes with some fun. Clancy is creative in getting provisions for the needs of his unit, much to the consternation of other units on the island because of his unorthodox methods. His "improvising" will furnish the ideal solutions for the poorly equipped VMF-247 but, by the end of the film, Clancy will not avoid the MPs and losing some stripes.

A full list of cast and production crew is too lengthy to list, please see: IMdB profile.

Director Nicholas Ray chose to play opposite John Wayne because Ryan had been a boxer in college and was the only actor Ray could think of who could "kick Wayne's ass."

The role of the more "human" Captain Griffin is a fictional one and contrasts with the more austere Major Kirby.

The fighter planes appearing in the first part of the film are not the historically accurate Grumman but Grumman s. Apparently few Wildcats survived while an appreciable number of Hellcats were available in 1951, the year the film was produced. Hellcats painted white are used as Zero fighters.

The production, as mentioned in the opening scene of the film, is attributed to , the aviation maverick.

The role of Major Kirby portrayed in this film was inspired by real World War II Maj. John L. Smith for his missions over Guadalcanal in 1942. His actions in the war were renowned by the time the film was made. John L. Smith was awarded the in 1943 and later promoted to Lt Colonel, as was Kirby in the film. One may notice a distinct similarity in appearance between Smith and actor John Wayne.

The squadron Smith has flown with was while the one in the film carried the name of VMF-247. Real battle footage was incorporated into various scenes of the film.