Lozenge
This article is about the shape. For the cough tablets, see Throat lozenge. For lozenges in heraldry, see Lozenge (heraldry).

A lozenge (◊), often referred to as a diamond, is a form of rhombus. The definition of lozenge is not strictly fixed, and it is sometimes used simply as a synonym (from the French losange) for rhombus. Most often, though, lozenge refers to a thin rhombus—a rhombus with acute angles of 45°.[1] The lozenge shape is often used in parquetry and as decoration on ceramics, silverware and textiles. It also features in heraldry and playing cards. 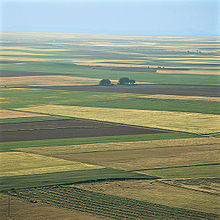 Sown fields in an open field system of farming.

The lozenge motif dates as far back as the Neolithic and Paleolithic period in Eastern Europe and represents a sown field and female fertility.[2] The ancient lozenge pattern often shows up in Diamond vault architecture, in traditional dress patterns of Slavic peoples, and in traditional Ukrainian embroidery. The lozenge pattern also appears extensively in Celtic art, art from the Ottoman Empire, and ancient Phrygian art.[3]

Seventeenth century orchards in England were planted on a symmetrical grid pattern. In 1659, philosopher Sir Thomas Browne published The Garden of Cyrus subtitled The Quincunciall Lozenge, or Network Plantations of the Ancients where he outlined mystical interconnection of art, nature and the Universe. He suggested that ancient plantations used the quincunx pattern that revealed the "mystical mathematics of the city of Heaven"[4] and proof of the wisdom of God.

Lozenges appear as symbols in ancient classic element systems, in amulets, and in religious symbolism. In a suit of playing cards, diamonds is in the shape of a lozenge.

In modal logic, the lozenge expresses the possibility of the following expression. For example, the expression

expresses that it is possible that P is true.

In axiomatic set theory, the lozenge refers to the principles known collectively as diamondsuit. 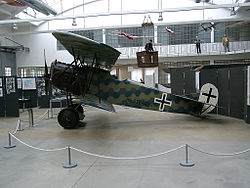 During the First World War, the Germans developed Lozenge-Tarnung (lozenge camouflage).[7] This camouflage was made up of colored polygons of four or five colors. The repeating patterns often used irregular four-, five- and six-sided polygons, but some contained regular rhombi or hexagons. Because painting such a pattern was very time consuming, and the paint added considerably to the weight of the aircraft, the pattern was printed on fabric. This pre-printed fabric was used from 1916 until the end of the war, in various forms and colours.

The lozenge in heraldry is a diamond-shaped charge, usually somewhat narrower than it is tall. A mascle is a voided lozenge—that is, a lozenge with a lozenge-shaped hole in the middle—and the rarer rustre is a lozenge containing a circular hole. A field covered in a pattern of lozenges is described as lozengy; a similar field of mascles is masculy.

Cough tablets have taken the name lozenge, based on their original shape. According to the Oxford English Dictionary the first use of this sense was in 1530.

The lozenge is used in the U.S. Army, Marine Corps, and Air Force on the insignia of their respective First Sergeants.

They are also used in the Junior ROTC and the Cadet Program in the Civil Air Patrol, for Officers from the military pay grades of Cadet O-4 to Cadet O-6 (c/Major, c/Lieutenant Colonel to c/Colonel). 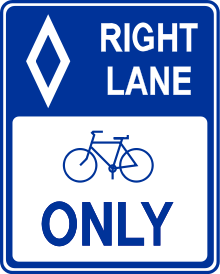 The lozenge can be used on public roadways in the United States and Canada to mark a specific lane for a particular use. The lane will usually be painted with a lozenge at a regular interval, and signage will be installed to indicate the restrictions on using the lane. This marking is most often used to denote high-occupancy vehicle lanes or bus lanes, with accompanying signage reading "◊ HOV LANE" or "◊ BUS LANE" and giving the requirements for a vehicle to be accepted. Prior to 17 January 2006, lozenges could also be used to mark bicycle-only lanes, often in conjunction with a bicycle icon.[8] In New Zealand, a lozenge marked in white paint on the road indicates an upcoming uncontrolled pedestrian crossing.