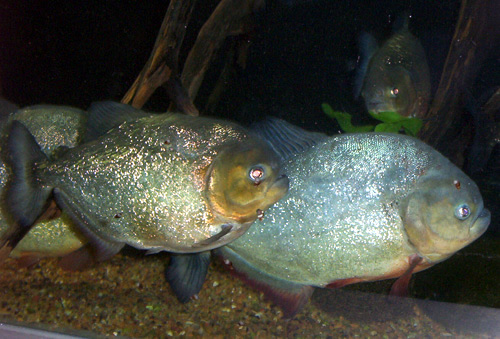 The name "piranha" may come from a hybrid composed of languages;Clarifyme|date=March 2008 it may be a compound word made of the components "pirá", meaning 'fish', and "sanha" or "ranha", meaning ''. In Tupi, inalienably possessed nouns take the prefix "t-", "s-", or "r-" depending on the possessor, or zero in combination; thus "pirá" + "anha". Alternatively, it may come from Tupi "pirá" (fish) and "ánha" (devil).Fact|date=July 2007

Piranhas belong to the family of which also includes closely related herbivorous fish including s).

The total number of piranha species is not known and new species continue to be described. In 1988, it was stated that fewer than a half of the approximately 60 nominal species of piranhas at the time were valid. More recently in 2003, one author recognized a total of 38 or 39 species, although the validity of some taxa remains questionable.

Piranhas are found only in the Amazon basin, in the , in rivers of the s, in the Paraguay-Paraná, and in the systems; some species of piranha have extremely broad geographic ranges, occurring in more than one of the major basins mentioned above, whereas others appear to have much more limited distributions.

However, piranha (inevitably former -dwellers) have been introduced into parts of the United States, even being occasionally found in the , but they typically do not survive the cold winters of that region. [Fahrenthold, David A.: [http://www.washingtonpost.com/wp-dyn/content/article/2005/05/28/AR2005052801079_pf.html In River of Many Aliens, Snakehead Looms as Threat] , The Washington Post, May 29, 2005.] Recently a piranha was caught by a fisherman in the in . [The Associated Press [http://www.usatoday.com/news/offbeat/2007-07-04-piranha_N.htm Piranha caught in N.C. river] USA Today, 2007-07-04] This is the first known case in North Carolina and possibly in the region. [WNCN-TV [http://www.msnbc.msn.com/id/19585612 Fisherman Catches Piranha In N.C. River] MSNBC, nbc17.com] Piranha have also been discovered in the in South-East . Research is being carried out to establish how piranha have moved to such distant corners of the world from their original habitat. It is anticipated that rogue exotic fish traders have released them in the lake to avoid being caught by anti-poaching forces. [ [http://www.prothom-alo.com/mcat.news.details.php?nid=Nzg3MTA=&mid=Ng= Prothom-alo] ]

"Serrasalmus", "Pristobrycon", "Pygocentrus", and "Pygopristis" are most easily recognized by their unique dentition. All piranhas have a single row of sharp teeth in both jaws; the teeth are tightly packed and interlocking (via small cusps) and used for rapid puncture and shearing. Individual teeth are typically broadly triangular, pointed, and blade-like (flat in profile). There is minor variation in the number of cusps; in most species the teeth are tricuspid with a larger middle cusp that makes the individual teeth appear markedly triangular. The exception is "Pygopristis", which has pentacuspid teeth and a middle cusp that is usually only slightly larger than the other cusps. In the scale-eating "", the shape of their teeth is markedly different and the ry teeth are in two rows, as in most other serrasalmines.

Ecologically, piranhas are important components of their native environments. Although largely restricted to lowland drainages, these fishes are widespread and inhabit diverse habitats within both and environments. Some piranha species are abundant locally and multiple species often occur together. As both s and s, piranhas influence the local distribution and composition of fish assemblages. Certain piranha species consume large quantities of seeds, but unlike the related "" and "", herbivorous piranhas thoroughly masticate and destroy all seeds eaten and consequently do not function as dispersers.

The piranha is renownedly portrayed and known as a vicious species of fish hunting in large schools. This conception was created from the past belief that piranhas created schools for hunting purposes. Recent research, however, suggests that this is actually used as a defense mechanism against the piranha's natural predators, such as s, s and gigantic . [cite web |url=http://news.yahoo.com/s/nm/20070701/sc_nm/piranhas_dc |title=Vicious Piranhas are really wimps |accessdate=2007-07-05 |author=Yahoo News Online]

Research on the species "Serrasalmus aff. brandtii" and "Pygocentrus nattereri" in Viana Lake, which is formed during the wet season when the (a tributary of the Rio Mearim) floods, has shown that these species eat vegetable matter at some stages in their life; they are not strictly carnivorous fish. [ [http://www.practicalfishkeeping.co.uk/pfk/pages/item.php?news=695 Piranhas not strictly carnivorous, says study] ]

Locals often use piranha teeth to make tools and weapons. Piranha are also a popular food, though if an individual is caught on a hook or line it may be attacked by other piranhas.

Piranha are commonly consumed by subsistence fishermen and often sold for food in local markets. In recent decades, dried specimens have been marketed as tourist s. Piranhas occasionally bite and sometimes injure bathers and swimmers, but truly serious attacks are rare and the threat to humans has been largely exaggerated. A piranha bite is sometimes considered more an act of carelessness than that of misfortune.Clarifyme|date=September 2008 But piranhas are a considerable nuisance to commercial and sport fishers because they steal , mutilate catch, damage nets and other gear, and may bite when handled.

The most common aquarium piranha is the "Pygocentrus nattereri", or the red-bellied piranha. Piranhas can be bought fully grown or as babies, often no larger than a thumbnail. It is important to keep "Pygocentrus" piranhas alone or in groups of three or more, not in pairs, since aggression among them is common and is distributed more widely when kept in larger groups, not allowing the weaker fish to survive. When kept in groups, it is recommended that they be in even-numbered groups, as piranhas will gang up on an odd member.Fact|date=July 2008 It is not rare to find individuals with one eye missing due to a previous attack. If underfed, piranhas are likely to become cannibalistic on others in their group.

* Eric J. Lyman: [http://www.ericjlyman.com/piranha.html Piranha meat could take a bite out of what ails you] , Houston Chronicle, July 17, 1998
* [http://www.piranhaportal.net PiranhaPortal.Net] (in Italian)http://www.bellaonline.com/articles/art51954.asp