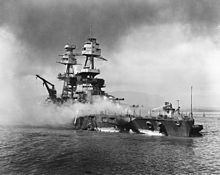 Damage control at 9:25AM December 7, 1941: The USS Nevada is shown temporarily beached and burning after being hit by Japanese bombs and torpedoes. A harbor tugboat is alongside, helping to fight fires.

Damage control is a term used in the Merchant Marine, maritime industry and navies for the emergency control of situations that may hazard the sinking of a ship. It is also used in other contexts as explained below.

The term is also used in project management and other contexts to describe the actions needed to deal with any problem that may jeopardize an endeavor. As well, it has been adopted for use in politics and media to describe a need to suppress information or employ spin doctors to represent a response to a situation.

Simple measures may stop flooding, such as:

More complicated measures may be needed if a repair must take the pressure of the ship moving through the water. For example:

Damage control training is undertaken by most seafarers, but the engineering staff are most experienced in making lasting repairs.

Damage control is distinct from firefighting. Damage control methods of fighting fire are based on the class of ship and cater to ship specific equipment on board.

Another major part of damage control is drills. On most ships there are four major drills ran depending on the design of the ship. The first type of drill is fire. This is broken down into Alpha fire or anything that would leave an ash, Bravo or any flammable liquid fires, Charlie or electrical fires, and Delta or flammable metals. The second type is flooding drills. These consist of pipe ruptures, hull breaches, or drainage system backups. The third type is toxic gas. This is a big problem on ships as there are many toxic gases on ships and some are more deadly than others. Several examples include H2S hydrogen Sulfide and Chlorofluorocarbon. The fourth type of drill is potentially the most dangerous: a main space fire. This would be a scenario where one of the engines or any auxiliary space for the engine would catch on fire. 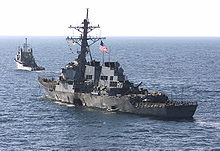