Cooking Mama (クッキング ママ, Kukkingu Mama?) is a cookery simulation-styled minigame compilation video game for the Nintendo DS and iOS developed by Office Create and published by Taito, Majesco Entertainment, and 505 Games. It was awarded IGN's "Best Of E3" award for 2006 and was joined by a sequel for the DS, Cooking Mama 2: Dinner with Friends. Two games have since been made for the Wii, Cooking Mama: Cook Off and Cooking Mama: World Kitchen.

In Cooking Mama, the player is tasked with cooking various meals using the device's touch screen. Following the instructions of the titular "Mama", the player uses the stylus or finger to chop vegetables, slice meat, flip food in pans, and arrange the final items on the plate. The version of the game for iOS also takes advantage of the accelerometer in its devices with some similar gameplay to Cooking Mama: Cook Off. Each of these tasks is performed by completing a mini-game which usually lasts less than 10 seconds. The gameplay structure consists of the player progressing through a series of short minigames. The game features a total of 96 different dishes.

Each minigame represents a different activity in the meal preparation, such as mixing, frying, or chopping the provided ingredients. The minigame mechanics themselves range from quickly drawing parallel lines in order to chop items, to a rhythm game where ingredients are added to a skillet or the heat is adjusted at precisely the right time. In many cases, players must look at the top screen of the DS for guidance on what to do next and then perform the task on the bottom screen. If the player makes a serious blunder or time expires without sufficient progress being made, that step in the cooking process is considered a failure. When this happens, a graphic of an angry "Mama" with flames erupting from her eyes is displayed, along with the caption "Don't worry, Mama will fix it!".

Completing a dish can require playing one minigame, or as many as a dozen. The player's performance is rated when each dish is finished, based on the average result of each minigame. Depending on the final score, the game may award the player a bronze, silver or gold medal. The highest medal earned for each dish is recorded and displayed next to each item on the selection screen. 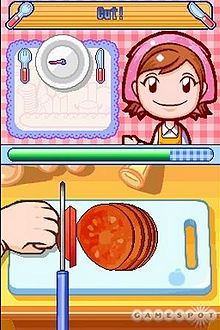 A screenshot of the "Let's Cook" mode, where a player is cutting a tomato for a dish

The main game mode where players cook dishes. Players initially start with just a few simple recipes to choose from, with additional recipes unlocked as the earlier ones are mastered. Each recipe requires players to play through a short, timed minigame for each ingredient or group of ingredients. For example, to make a sandwich, the player would first be required to chop a cucumber into slices before the time limit elapses.

When cooking a recipe which has previously been mastered, the player sometimes has the option to change the dish being made "on the fly" between two minigames. If completed, this new recipe is then unlocked for future play.

A player also has a choice to practice a recipe.

In this mode, players can take the recipes which have been unlocked and combine them to make something new. For example, the "Fried Eggs" recipe can be combined with the "Rice" recipe to make an entree.

In this mode, players put their minigameing ingredients, peeling, stewing, tearing, and more. The player is ranked at the end of each task.

The overall reception of Cooking Mama was mediocre to fair, with critics noting that it seems to be a reasonably good budget title for the DS, making effective use of the touch screen, even if it does lack depth.

The IGN review emphasized the game's appeal to casual gamers, and noting that, while simple, the game was nonetheless enjoyable. The review remarked, "Though the entirety of this game is simply doing what you're told as quickly as possible, it's actually an amusing game if you're not expecting much out of it.", earning the title a 7.0/10.[6] The GameSpot review was more negative, with concerns about the repetitive nature of gameplay and the seemingly random progression of mini-games tying recipes together. These were somewhat balanced by positives such as the colorful graphics and budget pricing, resulting in an overall score of 6.9/10.[7]

The animal rights group People for the Ethical Treatment of Animals (PETA) created a flash game entitled Cooking Mama - Mama Kills Animals[13] intended to both criticize the video game’s use of meat-based recipes and to encourage veganism.[14] The creators of Cooking Mama responded to the PETA in a press release stating that “I would never put rat in my Ratatouille,” and indicated that some of Mama’s recipes are vegetarian.[15] PETA stated that they were happy with the upcoming release of Gardening Mama, a spin-off of the series.[16]

A sequel of sorts, Cooking Mama: Cook Off, was released for the Wii in Japan on February 8, 2007. Replacing touchscreen control with use of the Wii Remote to guide the cooking activities, it was later released in North America on March 20, 2007 and in May 2007 in Europe.

The second Nintendo DS game in the series Cooking Mama 2: Dinner with Friends, was released in November 2007. Along with new recipes, this title expands the total number of different minigames and adds several new gameplay modes.

Cooking Mama: World Kitchen for Wii, was released on November 18, 2008.

A fourth sequel entitled "Cooking Mama 4: Kitchen Magic" will be released for the 3DS in fall in the US and November 11, 2011 in the UK