The Northern Ireland Environment Agency has given it a grade A listed building status because of its architectural and historical significance. The Crumlin Road Courthouse, also derelict, stands opposite the Gaol. A tunnel under the main road connects the two buildings and was used to transport the prisoners to the courthouse. During the history of the prison between 1846 and 31 March 1996, when it was closed, an estimated 25,000 prisoners were held here.[2] 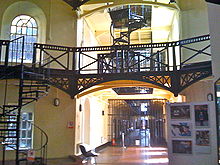 Designed by Sir Charles Lanyon, the prison was built between 1843 and 1845 and cost £60,000. Built as a replacement for the County Gaol on Antrim Street in Carrickfergus, and known as the County Gaol for Antrim, it was constructed of black balsalt rock on ten acres at the bottom of the Crumlin Road. Partly based on HM Prison Pentonville, it was one of the most advanced prisons of its day. Built within a five-sided wall, the four wings are up to four storeys in height and fan off from the central area which was known as The Circle. The prison was originally built to hold between 500 and 550 prisoners in cells that measured 12 x 7 feet. It was the first prison in Ireland to be built according to "The Separate System", intended to separate prisoners from each other with no communication between them. Later, especially in the early 1970s, as many as three prisoners were placed in each cell.[2]

The first 106 inmates, who were forced to walk from Carrickfergus Prison in chains, arrived in 1846. These inmates, who were men, women and children, completed the changeover of the two prisons. Children from impoverished working-class families were often imprisoned at the gaol in the early years for offences such as stealing food or clothing. Women inmates were kept in the prison block house until the early 1900s. Ten year old Patrick Magee, who had been sentenced to three months in prison hanged himself in his cell in 1858.[2][3]

When originally designed by Lanyon, the prison did not contain a gallows and the executions were carried out in public view until 1901, when an execution chamber was constructed at the end of C-wing and used until the last of the hangings in 1961. Seventeen prisoners were executed in the prison, the last being Robert McGladdery who was hanged in 1961 for the murder of Pearl Gamble.[2][3] The condemned would live in a large cell (large enough for two guards to live in as well), unknowingly living next to the gallows, which were concealed by a moveable bookcase. The bodies of the executed were buried inside the prison in unconsecrated ground and the graves were marked only with their initials and year of execution on the prison wall.[2][4] The execution of Tom Williams, a member of the IRA, took place on 2 September 1942. Williams, nineteen years old, was hanged for the murder of an RUC officer. The hangman in charge was Thomas Pierrepoint, the gaol's most regular hangman, who carried out six executions in the gaol between 1928 and 1942. Williams was one of the two prisoners of the seventeen executed whose remains were reinterred and buried elsewhere.[2]

Even with the heavy security in place, there were several escapes from the prison over the years. In 1943, prisoners including the IRA's chief of staff, Hugh McAteer, Patrick Donnelly, and Jimmy Steele escaped from Crumlin Road Gaol and were not recaptured despite a £3,000 reward being offered. Several other escapes by IRA prisoners were carried out in 1971.

For the last thirty years of its working life until it closed on 31 March 1996, Crumlin Road prison served as a remand centre for suspected terrorist and paramilitary prisoners awaiting trial.[3]

Some of the well-known persons held in the Crumlin Road Gaol during its history were: Éamon de Valera,[5] Michael Stone,[6] Lenny Murphy, Robin "the Jackal" Jackson,[7] and Ian Paisley,[8]

Richard Graham escaped from the Crumlin Road Prison in Belfast 7 June 1957, a prison that was at the time said to be the most secure jail in Ireland and the United Kingdom.[9]

A restoration project at the Gaol was announced in August 2010.[10]