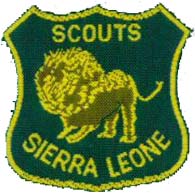 In 1971, was awarded the "", the only distinction of the , awarded by the World Scout Committee for exceptional services to world Scouting.

Recent military unrest has cut Scouting activities and communications. It is unknown at this time whether Scouting is active.

Scouts are concerned about , and the association is well known for promoting projects. Scouts are popular throughout the country due to their numerous projects, particularly in rural areas.

Proficiency badges are mandatory in the field of public service, resourcefulness and agriculture.

The Sierra Leone Scouts Association is presently working working with the Ministry of Social Welfare, Gender and Children's Affairs to ensure the development of Scouting in the country. The SLSA is currently working on a Street Kids Program sponsored by WOSM. The Sierra Leone Scouts Association is currently looking for partners to start a bio-intensive agricultural project.

The membership badge of the Sierra Leone Scouts Association features a , a symbol in use since Sierra Leone was a colonial branch of British Scouting and an allusion to the country's name.