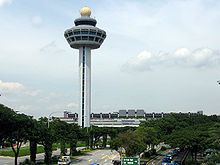 The control tower of Changi Airport, where the CAAS head office is located

The CAAS regulates civilian air traffic within the airspace jurisdiction of the Republic; it is also the sole government agency to maintain the operational efficiency of the airports in Singapore and to engage civilian air-service agreements with air-service operators.