The Cloisters is a museum located in Fort Tryon Park, New York City. The building, which is a branch of the Metropolitan Museum of Art, was reconstructed in the 1930s from the architectural elements of several European medieval abbeys. It is used to exhibit art and architecture from Medieval Europe.

The Cloisters, which is near the northern tip of Manhattan island on a hill overlooking the Hudson River, incorporates parts from five French cloistered abbeys. Buildings at Saint-Michel-de-Cuxa, Saint-Guilhem-le-Désert, Bonnefont-en-Comminges, Trie-en-Bigorre, and Froville were all disassembled brick-by-brick before being shipped to New York. Between 1934 and 1938, the features were reassembled in Fort Tryon Park.

The area around The Cloisters was landscaped with gardens planted according to horticultural information obtained from medieval manuscripts and artifacts, and the structure includes multiple medieval-style cloistered herb gardens. 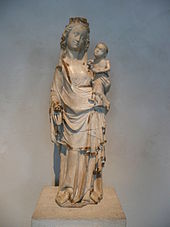 The museum and adjacent park, which incorporate four acres (16,000 m²), were created through an endowment grant by John D. Rockefeller, Jr., who also donated the majority of his medieval art collection to the project. Much of this art collection came from George Grey Barnard, an American sculptor and collector of medieval art, who had already established a medieval-art museum near his home in Fort Washington.

After Rockefeller purchased Barnard's entire collection, he gave the collection to the Metropolitan Museum of Art. Barnard's collection, combined with a number of pieces from Rockefeller's own collection (including the Unicorn tapestries), became the centerpiece for The Cloisters. Rockefeller subsequently purchased more than 65 acres (260,000 m2) of land north of Barnard's museum with the intention of converting it into a public park and site for the new museum.[1] Rockefeller also bought and donated several hundred acres of the New Jersey Palisades to the State of New Jersey on the other side of the Hudson River to preserve the view for the museum.

The museum buildings were designed by Charles Collens the architect of New York City's Riverside Church who reconstructed the cloister elements salvaged from Europe by simplifying and merging the various medieval styles. In 1988, the Treasury gallery within The Cloisters, containing objects used for liturgical celebrations, personal devotions, and secular uses, was renovated. Other galleries were refurbished in 1999.

The Cloisters collection contains approximately five thousand European medieval works of art, with a particular emphasis on pieces dating from the 12th through the 15th centuries. Notable works of architecture include the Cuxa cloister, with an adjacent Chapter House; and the Fuentidueña Apse from a chapel in the province of Segovia (Castilla y León, Spain).

Among the works of art are seven Flemish tapestries depicting The Hunt of the Unicorn,[2] Robert Campin's Mérode Altarpiece,[3] and the Romanesque altar cross known as the Cloisters Cross or Bury St. Edmunds Cross, which was acquired under the curatorship of Thomas Hoving.