Jeanne Shaheen (born January 28, 1947) is an American politician, a member of the Democratic Party, and the Senior United States Senator from New Hampshire. The first woman in U.S. history to be elected as both a Governor and U.S. Senator, she was the first woman to be elected Governor of New Hampshire, serving from 1997 to 2003. Shaheen ran for the United States Senate in 2002, but was narrowly defeated by Republican challenger John E. Sununu. She then served as Director of the Harvard Institute of Politics, before resigning to run again for the U.S. Senate in the 2008 election, defeating Sununu in a rematch. Shaheen is the first Democratic Senator from NH since John A. Durkin, who retired in 1980, and is currently the most junior senior Senator.

Shaheen was born Cynthia Jeanne Bowers in Saint Charles, Missouri. She is the wife of Lebanese-American attorney and political operative Bill Shaheen. Together they have three children. She graduated from high school in Selinsgrove, Pennsylvania, and earned a bachelor's degree in English from Shippensburg University of Pennsylvania and a master's degree from the University of Mississippi. She taught high school in Mississippi and moved to New Hampshire in 1973, where she taught school and owned a small business.

A Democrat, she worked on several campaigns before running for office in 1990, when she was elected to the state Senate. In 1996, 1998 and 2000 she was elected governor of New Hampshire.

Shaheen's original decision to run for New Hampshire Governor followed the retirement of Republican Governor Steve Merrill. Her opponent in 1996 was Ovide P. Lamontagne, then chairman of the State Board of Education. Shaheen ran as a moderate. Her campaign centered on the problems of New Hampshire's schools and her pledge to expand kindergartens so that more children statewide could benefit from them. She defeated Lamontagne by 57 to 40 percent.[1]

In both 1996 and 1998, Shaheen pledged to veto any new broad-based taxes for New Hampshire, which taxes neither sales nor its residents' earned income. A school-funding crisis, however, pressured the state's reliance on property taxes.[3]

Running for a third term in 2000, Shaheen refused to renew that no-new-taxes pledge, becoming the first New Hampshire governor in 38 years to win an election without making that pledge. Shaheen's preferred solution to the school-funding problem was not a broad-based tax but legalized video-gambling at state racetracks—a solution repeatedly rejected by the NH legislature.[4]

In 2001 Shaheen tried to implement a 2.5 percent sales tax, the first broad-based tariff of its kind in history of New Hampshire. Unlike neighboring New England states New Hampshire does not have a sales tax. The state's legislature rejected her proposal.[5] She also proposed an increase in the state's cigarette tax and a 4.5 percent capital gains tax.

Gore named Jeanne Shaheen to his short list of potential vice presidential nominees, which also included Indiana Senator Evan Bayh, then-North Carolina Senator John Edwards, then-House Minority Leader Dick Gephardt, Massachusetts Senator John Kerry, and Connecticut Senator Joe Lieberman.[7] Shaheen quickly acknowledged that, while appreciative of the speculation, she would not be a candidate for vice president, and she urged the Gore campaign to withdraw her name from consideration. Gore went on to choose Lieberman as his running mate.

After a short time teaching at Harvard University (and a fellowship in the Institute of Politics with former Massachusetts Governor Jane Swift), she was named national chairperson of John Kerry's 2004 presidential campaign in September 2003. Kerry's campaign, stagnant at that point, won the nomination handily and Shaheen received much of the credit.

After she was elected to three two-year terms as Governor, Shaheen declined to run for a fourth term, instead choosing to run for the U.S. Senate in 2002 when she was defeated by Republican John E. Sununu, by a 51 percent to 47 percent margin (19,751 votes). In a recent interview with the Concord Monitor, Shaheen attributed her loss in part to "discussion about the job that [she] did as governor." At that time, early Republican advertisements slammed her support for putting a sales tax on the ballot or faulted her for failing schools.[8]

In June 2004, former Republican consultant Allen Raymond pleaded guilty to jamming Democratic Party lines set up to get New Hampshire Democrats to the polls in 2002, an action that some (most notably former Senator Bob Smith, whom Sununu had defeated in the Republican primary) believe may have contributed to Shaheen's narrow loss.[9] A judge sentenced Raymond to five months in jail in February 2005. Charles McGee, the former state GOP executive director, was sentenced to seven months for his role.

Raymond alleged that James Tobin, Northeast field director for the National Republican Senatorial Committee, masterminded the plot. In December 2005, Tobin was convicted of two federal felonies arising from the phone-jamming and sentenced to ten months in prison but that conviction was reversed after Tobin's lawyers appealed. In October, 2008, prosecutors filed two new felony indictments which charged that James Tobin lied to a FBI agent when he was interviewed in 2003 about his role in the phone-jamming case.[10] These subsequent charges were summarily dismissed in 2009 after the federal judge in Maine's District Court found them motivated by 'vindictive prosecution.'[11]

The race was the first time two candidates with Arab-American families, although Shaheen herself is not Arab-American, have squared off in a Senate race.[12]

In late 2006, analysts looking ahead to the 2008 U.S. Senate races pointed to John E. Sununu's seat in New Hampshire as a likely competitive contest. Democratic Governor of New Hampshire John Lynch, who was re-elected with 74% of the vote in 2006, had ruled himself out of running against Sununu, leaving some to begin looking to Shaheen as the obvious candidate. On March 18, the Nashua Telegraph announced that several Democratic polls showed Shaheen the best candidate to defeat Sununu, who trailed the former Governor in several polls, one putting Shaheen ahead of Sununu by nearly 30 points (57–29).[13] In early July 2007 through UNH, CNN and WMUR put out a poll[14] regarding the New Hampshire 2008 Senate race. The poll showed that Gov. Shaheen would beat Sen. Sununu in a race (54–38). Other Democratic candidates did not have this type of lead, which led many to believe Gov. Shaheen would be the right choice to beat Sen. Sununu in 2008. 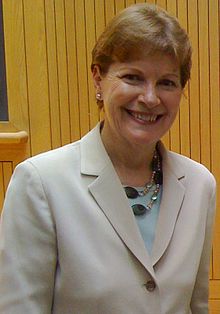 Shaheen on the campaign trail at Dartmouth College, July 2008

In April 2007, Shaheen met with Senate Majority Leader Harry Reid (D-Nevada) and Democratic Senatorial Campaign Committee Chairman Chuck Schumer (D-New York) about a possible US Senate run. The Senators both said that she would have strong support from the DSCC if she ran. The move came as a sign that Shaheen was more than likely to seek a rematch against Sununu. Two months later, in June 2007, the Rothenburg Political Report stated that Shaheen was then "likely to run" for the US Senate. In addition, at the New Hampshire Democratic Convention, former New Hampshire Democratic Chairwoman Kathy Sullivan announced that she was forming a draft movement of several legislators, activists, and party organizers to convince Shaheen to run for the US Senate. Some of the announced candidates said that they would yield to Shaheen if she announced plans to run, while Shaheen's husband, Bill, said that Shaheen would make an announcement in September regarding her plans.

On September 14, 2007, Shaheen announced that she intended to run for the Senate against Sununu.[15] On September 15, 2007, she formally launched her US Senate bid at her home in Madbury, New Hampshire. Six days later, on September 21, EMILY's List endorsed her campaign.

On January 6, 2009, Shaheen was sworn into the United States Senate.

In June 2009, Shaheen cosponsored and voted for the bipartisan Family Smoking Prevention and Tobacco Control Act, giving the Food and Drug Administration the power to regulate the tobacco industry.[16][17] The bill requires companies to disclose all the ingredients used in their cigarettes and charges the FDA with policing the industry against youth-targeted advertising.[18]

Also in 2009, Shaheen partnered with Sen. Susan Collins (R-Maine) in crafting and introducing the bipartisan Medicare Transitional Care Act, which provides follow-up care for discharged hospital patients in order to reduce the need for re-hospitalizations.[19] The bill passed in 2010,[20] and research at the University of Pennsylvania predicts the measure will lower the cost of health care by as much as $5,000 per Medicare beneficiary while also improving health care quality and reducing re-hospitalizations.[21]

In March 2010, Shaheen voted to pass the Student Aid and Fiscal Responsibility Act, which increased Pell Grants while also ending the practice of distributing federal student loans through banks.[22] The bill cuts out the middleman and institutes direct lending to students, a move that the OMB scored as saving taxpayers $68 billion over 11 years.[23][24]

Following the BP oil spill in the Gulf of Mexico in 2010, Shaheen proposed abolishing the Minerals Management Service, the U.S. government agency tasked with regulating offshore drilling, arguing that reform had been insufficient and that a new agency was needed.[25] Shaheen also proposed legislation giving the President's bipartisan BP Oil Spill Commission subpoena power in their investigation.[26] She has been championing this issue over repeated, unexplained Republican objections and has argued that subpoena power is necessary to avoid another such disaster, emphasizing the spill's economic costs to the Gulf Coast region and the economy as a whole.[27]

The Senator received the following committee assignments in the 111th Congress:[28]

In 2002, when Shaheen narrowly lost to Sununu, both supported "regime change" for Iraq.[31]

Shaheen said that she came to supporting the policy of removing Saddam Hussein from power after meeting with former Clinton-administration National Security Advisor Sandy Berger. According to the Concord Monitor and Associated Press, the issue was a minor one in the race.

Shaheen later questioned George W. Bush's handling of the situation in Iraq. In September, 2004 she said

On July 28, 2004, while serving as Chair of the Kerry-Edwards Campaign, Gov. Shaheen answered questions about her prior support of the Iraq war during an interview on C-SPAN.[32]

"George (W.) Bush said that the reason we needed to go to war in Iraq, the reason we needed to remove Saddam Hussein was because he had weapons of mass destruction, weapons that could be used against this country, because he had ties to al Qaeda and the terrorists who were responsible for the Sept 11 tragedy. What we know now and what George Bush and Dick Cheney have admitted is that in fact Saddam Hussein did not have weapons of mass destruction…. The links to al Qaeda that the president talked about were not there…. While I appreciate that there was an effort to make people in this county think that [there was a connection]… the fact is that’s not true."

Shaheen initially opposed same-sex marriage as governor of New Hampshire. In 2009, however, she came out in favor of the legislative enactment of marriage equality for same-sex couples, and became a sponsor of the Respect for Marriage Act[33]. She also voted in favor of the repeal of Don't ask, don't tell, and supports government recognition of same-sex spouses of military and other government personnel[34].