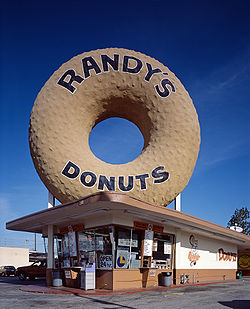 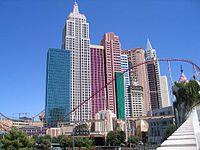 Novelty architecture is a type of architecture in which buildings and other structures are given unusual shapes as a novelty, such as advertising, notoriety as a landmark, or simple eccentricity of the owner or architect. Many examples of novelty architecture take the form of buildings that resemble the products sold inside to attract drive-by customers. Others are attractions all by themselves, such as giant animals, fruits, and vegetables, or replicas of famous buildings. And others are merely unusual shapes or made of unusual building materials.

Some hotel casinos on the Las Vegas Strip can be considered novelty architecture, including the pyramid-shaped Luxor Hotel and the New York-New York Hotel & Casino, a building designed to look like the New York City skyline.

Novelty architecture is also used extensively in amusement parks such as Disneyland to fit their playful and sometimes retro theme. 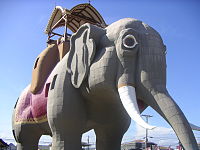 Programmatic (also known as mimetic or mimic) architecture is characterized by constructions in the forms of objects not normally associated with buildings, such as characters, animals, people or household objects. There may be an element of caricature or a cartoonish element associated with the architecture. 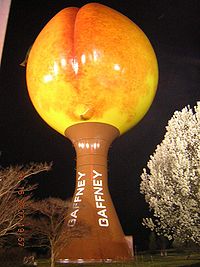 Water towers, often a prominent feature in a small town, have often been shaped or decorated to look like everyday objects.

Several breweries and other businesses have designed holding tanks in the shape of giant cans of beer or other containers. 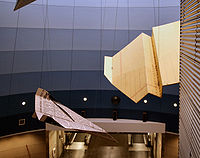 Another aspect of novelty architecture is sculptures of ordinary items scaled to enormous size.

Architecture popular in the 1950s-1960s in southern California and in Florida featured sharp corners, tilted roofs, starburst designs, and fanciful shapes. This came to be known as Googie Doo Wop or populuxe architecture.

Long-established firms whose features are well-known could still qualify as novelty architecture. A couple of examples would be McDonald's original golden-arches design, originating in California as many of the novelty designs have; and the self-referencing design of the White Castle restaurants.

Some critics claim that much of today's contemporary architecture under the guise of Deconstructivism is actually Novelty architecture. Practitioners include leading architects such as Frank Gehry, Daniel Libeskind and Zaha Hadid.