The Spanish Constitution is the fundamental law of the Kingdom of Spain. It was enacted on foot of the 1978 referendum, as part of the Spanish transition to democracy. It was preceded by many previous constitutions of Spain.

Each of the Spanish parties had its recommendation to voters.

A seven-member panel was selected among the elected members of the Cortes to work on a draft of the Constitution to be submitted to the body. These came to be known, as the media put it, as the padres de la Constitución or "fathers of the Constitution". These seven people were chosen to represent the wide (and often, deeply divided) political spectrum within the Spanish Parliament, while the leading role was given to then ruling party and now defunct Unión de Centro Democrático (UCD).

The writer (and Senator by Royal appointment) Camilo José Cela later polished the draft Constitution's wording. However, since much of the consensus depended on keeping the wording ambiguous, few of Cela's proposed re-wordings were approved. One of those accepted was the substitution of the archaic gualda ("weld-colored") for the plain amarillo (yellow) in the description of the flag of Spain.[citation needed]

The constitution was approved by the Cortes Generales on October 31, 1978, and by the Spanish people in a referendum on December 6, 1978. 88% of voters supported the new constitution. Finally, it was promulgated by King Juan Carlos on December 27. It came into effect on December 29, the day it was published in the Official Gazette. Constitution Day on December 6 has since been a national holiday in Spain.

Writing the preamble to the constitution was considered an honour, and a task requiring great literary ability. The person chosen for this purpose was Enrique Tierno Galván. The full text of the preamble may be translated as follows:

The Spanish Nation, wishing to establish justice, liberty and security, and to promote the welfare of all who make part of it, in use of her sovereignty, proclaims its will to:

Guarantee democratic life within the Constitution and the laws according to a just economic and social order.
Consolidate a State ensuring the rule of law as an expression of the will of the people.
Protect all Spaniards and all the peoples of Spain in the exercise of human rights, their cultures and traditions, languages and institutions.
Promote the progress of culture and the economy to ensure a dignified quality of life for all
Establish an advanced democratic society, and
Collaborate in the strengthening of peaceful and efficient cooperation among all the peoples of the Earth.

Consequently, the Cortes approve and the Spanish people ratify the following Constitution.

Structure of the State

The Constitution recognizes the existence of nationalities and regions (Preliminary Title).

Section 2. The Constitution is based on the indissoluble unity of the Spanish Nation, the common and indivisible homeland of all Spaniards; it recognizes and guarantees the right to self-government of the nationalities and regions of which it is composed and the solidarity among them all.

As a result, Spain is now composed entirely of 17 Autonomous Communities and two autonomous cities with varying degrees of autonomy, to the extent that, even though the Constitution does not formally state that Spain is a federation (nor a unitary state), actual power shows, depending on the issue considered, widely varying grades of decentralization, ranging from the quasi-confederal status of tax management in Navarre and the Basque Country to the total centralization in airport management.

Section 1. In the exercise of the right to self-government recognized in Article 2 of the Constitution, bordering provinces with common historic, cultural and economic characteristics, island territories and provinces with historic regional status may accede to self-government and form Autonomous Communities in conformity with the provisions contained in this Title and in the respective Statutes. 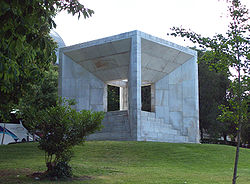 Monument to the Constitution of 1978 in Madrid.

The Spanish Constitution is one of the few Bill of Rights that has legal provisions for social rights, including the definition of Spain itself as a "Social and Democratic State, subject to the rule of law" (Sp. Estado social y democrático de derecho) in its preliminary title. However, those rights are not at the same level of protection as the individual rights contained in articles 14 to 28, since those social rights are considered in fact principles and directives of economic policy, but never full rights of the citizens to be claimed before a court or tribunal.

Due to the political strength of the Communist Party of Spain during the Transition, the right to State intervention in private companies in the public interest and the facilitation of access by workers to ownership of the means of production were also enshrined in the Constitution.[6]

The Constitution has been reformed once (Article 13.2, Title I) to extend to citizens of the European Union the right to active and passive suffrage (both voting rights and eligibility as candidates) in local elections.

The social democratic Spanish Socialist Workers' Party (PSOE) government of José Luis Rodríguez Zapatero has announced its intention to undertake a major reform of the constitution during its tenure:

The proposal has been met with scepticism from some quarters (notably in the main opposition party Partido Popular, PP) because some of these reforms deal with protected sections of the constitution, which would require supermajorities in order to be modified (see below). Furthermore, even an amendment of a non-protected part of the Constitution would require the agreement of the main opposition party or at least some of its representatives, sincec it would require the support of three-fifths of each House, which is 210 votes in the Congress of Deputies and 159 in the Senate.

The current version restricts the death penalty to military courts during wartime, but the death penalty has since been removed from the Code of Military Justice and thus lost all relevance. Amnesty International has still requested an amendment to be made to the Constitution to abolish it firmly and explicitly in all cases.

Title X of the Constitution establishes that the approval of a new constitution or the approval of any constitutional amendment affecting the Preliminary Title, or Section I of Chapter II of Title I (on Fundamental Rights and Public Liberties) or Title II (on the Crown), the so-called "protected provisions", are subject to a special process that requires (1) that two-thirds of each House approve the amendment, (2) that elections are called immediately thereafter, (3) that two-thirds of each new House approves the amendment, and (4) that the amendment is approved by the people in a referendum.

Curiously, Title X does not include itself among the "protected provisions" and, therefore, it would be possible, at least in theory, to first amend Title X using the normal procedure to remove or reduce severity of the special requirements, and then change the formerly protected provisions. Even though such a procedure would not formally violate the law, it could be considered an attack on its spirit.

The reform of the autonomy statutes

The "Statutes of Autonomy" of the different regions are the second most important Spanish legal normatives when it comes to the political structure of the country. Because of that, the reform attempts of some of them have been either rejected or produced considerable controversy.

The plan conducted by the Basque president Juan José Ibarretxe (known as Ibarretxe Plan) to reform the status of the Basque Country in the Spanish state was rejected by the Spanish Cortes, on the grounds (among others) that it amounted to an implicit reform of the Constitution.

The People's Party attempted to reject the admission into the Cortes of the 2005 reform of the Autonomy Statute of Catalonia on the grounds that it should be dealt with as a constitutional reform rather than a mere statute reform because it allegedly contradicts the spirit of the Constitution in many points, especially the Statute's alleged breaches of the "solidarity between regions" principle enshrined by the Constitution. After failing to assemble the required majority to dismiss the text, the People's Party filed a claim of unconstitutionality against several dozen articles of the text before the Spanish Constitutional Court for them to be struck down.

The amended Autonomy Statute of Catalonia has also been legally contested by the surrounding Autonomous Communities of Aragon, Balearic Islands and the Valencian Community[7] on similar grounds as those of the PP, and others such as disputed cultural heritage. As of January 2008, the Constitutional Court of Spain has those alleged breaches and its actual compliance with the Constitution under judicial review.

Prominent Spanish politicians, mostly from the People's Party but also from the ruling Socialist Party (PSOE) and other non-nationalist parties[citation needed], have advocated for the statutory reform process to be more closely compliant with the Constitution, on the grounds that the current wave of reforms threatens the functional destruction of the constitutional system itself. The most cited arguments are the self-appointed unprecedented expansions of the powers of autonomous communities present in recently reformed statutes:

States with limited
recognition Dependencies
and other territories Other entities
Categories: