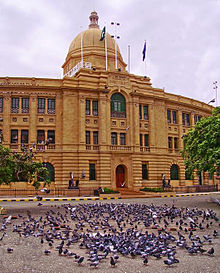 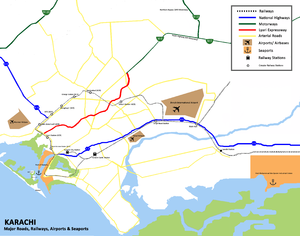 The Port of Karachi (Rainy day)

The Port of Karachi (Urdu: بندر گاہ كراچى Bandar gāh Karācī) is Pakistan's largest and busiest seaport, handling about 60% of the nation's cargo (25 million tons per annum). It is located between the Karachi towns of Kiamari and Saddar, close to the main business district and several industrial areas. The geographic position of the port places it in close proximity to major shipping routes such as the Strait of Hormuz. The administration of the port is carried out by the Karachi Port Trust, which was established in the nineteenth century.

The history of the port is intertwined with that of the city of Karachi. Several ancient ports have been attributed in the area including "Krokola", "Morontobara" (Woman's Harbour) (mentioned by Nearchus),[1] Barbarikon (the Periplus of the Erythraean Sea,[2] and Debal (a city captured by the Muslim general Muhammad bin Qasim in 712 CE). There is a reference to the early existence of the port of Karachi in the "Umdah", by the Arab navigator Sulaiman al Mahri (AD 1511), who mentions "Ras al Karazi" and "Ras Karashi" while describing a route along the coast from Pasni to Ras Karashi.

Karachi is also mentioned in the sixteenth century Turkish treatise Mir'ât ül Memâlik (Mirror of Countries, 1557) by the Ottoman captain Seydi Ali Reis, which is a compilation of sailing directions from the Portuguese island of Diu to Hormuz in the Persian Gulf. It warns sailors about whirlpools and advises them to seek safety in "Kaurashi" harbour if they found themselves drifting dangerously.

There is a legend of a prosperous coastal town called Kharak in the estuary of the Hub River (west of modern Karachi) in the late 17th and early eighteenth century.

In 1728 heavy rains silted up the harbour and resulted in the merchants of Kharak relocating to the area of modern Karachi. In 1729, they built a new fortified town called Kolachi (also known as Kalachi-jo-Kun and Kolachi-jo-Goth) on high ground north of Karachi bay, surrounded by a 16-foot (5 m) high mud and timber-reinforced wall with gun-mounted turrets and two gates.

The gate facing the sea was called "Kharadar" (salt gate), and the gate facing the Lyari River was called "Mithadar" (sweet gate). The modern neighbourhoods around the location of the gates are called Mithadar and Kharadar. Surrounded by mangrove swamps to the east, the sea to the southwest, and the Layari river to the north, the town was well defended and engaged in a profitable trade with Muscat and Bahrain.

From 1729 to 1783 the strategic location of Kolachi saw the town change hands several times between the Khans of Kalat and the rulers of Sind. In 1783, after two prolonged sieges the town fell to the Talpur Mirs of Sind, who constructed a fort mounted with cannons on Manora island at the harbour entrance.[3]

The prominence of the port attracted the British, who opened a factory in Karachi at the end of the eighteenth century but disagreements with the Mirs on trade tariffs led to the closure of the factory.

The British were concerned about Russian expansion towards the Arabian Sea, so in 1839 they occupied Karachi and later the whole of the Sindh. The port served as a landing point for troops during the First Afghan War.

The river Indus was an important artery of communication between Karachi and Jhirk Near Kotri Sindh, was an important river port. The Indus flotilla used large quantities of firewood and it was kept to fuel steamboats.

A number of British companies opened offices and warehouses in Karachi and the population increased rapidly. By 1852, Karachi was an established city with a population of 14,000 and a prosperous overseas trade.

The modern port began to take shape in 1854, when the main navigation channel was dredged and a mole or causeway was constructed to link the main harbour with the rest of the city. This was followed by construction of Manora breakwater, Keamari Groyne, the Napier Mole Bridge and the Native Jetty Bridge. The construction of the wharves started in 1882, and by 1914 the East Wharf and the Napier Mole Boat Wharf were complete while 1927 and 1944, the West Wharf, the lighterage berths and the ship-repair berths were constructed between 1927 and 1944.

From the 1861 the Sindh Railway line connected Karachi to the cotton and wheat producing areas of the Sindh and northern British raj and by 1899 Karachi was the largest wheat and cotton exporting port in South Asia. The period between 1856 and 1872 saw a marked increase in trade, especially during the American Civil War when cotton from Sindh replaced American cotton as a raw material in the British textile industry and the opening of the Suez Canal in 1869. Another major export was oil brought by rail from the Sui region in Balochistan.

Karachi's importance as a gateway to British India increased in 1911 when the capital was moved from Calcutta to Delhi. Karachi was an important military base during the First World War (1914–18) because it was the first British raj port of call for ships coming through the Suez Canal and was the gateway to Afghanistan and the Russian Empire. In 1936 the Sindh district of the Bombay Presidency was reorganised as a new province with Karachi as the capital instead of the traditional capital of Hyderabad. This led to new public services and buildings, thus increasing its population and importance.

Karachi was again a military base and port for supplies to the Russian front during the Second World War (1939–1945). In 1947, Karachi became the capital of the new nation of Pakistan, resulting in a growth in population as it absorbed hundreds of thousands of refugees.

Although the capital moved to Islamabad in 1959, Karachi remains the economic center of Pakistan, accounting for the largest proportion of national GDP based in part on the commerce conducted through the Port of Karachi and Port Qasim.

The port was targeted by the Indian Navy (codenamed Operation Trident) during the hostilities of the 1971 war.[4] 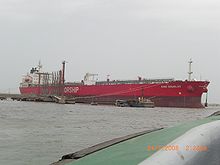 A frieghtliner at the dock

The port comprises a deep natural harbour with an 11 kilometre long approach channel which provides safe navigation for vessels up to 75,000 metric tons deadweight (DWT). The main areas of port activity are two wharves; East Wharf with seventeen vessel berths and West Wharf with thirteen vessel berths. The maximum depth alongside the berths is currently 11.3 metres. The two wharves extend in opposite directions along the upper harbour – the East Wharf northeast from Kiamari Island and the West Wharf southwest from Saddar town. The two wharves each include a container terminal:

There are also three liquid cargo-handling berths (oil piers), two ship repair jetties and a shipyard and engineering facility.[5] The shipyard carries out shipbuilding and repair for both commercial and military customers on a 29-hectare (70 acres) site at the West Wharf. The facilities include a large shipbuilding hall, three shipbuilding berths, two dry-docks and three foundries.[6]

The flow of cargo to and from the port is hampered by severe congestion in the harbour with several other maritime facilities located close to the port. Adjacent to the West Wharf is the Karachi Fishing Harbour, which is administered separately from the port and is the base for a fleet of several thousand fishing vessels. The West Wharf also hosts a ship repair facility and shipyard and a naval dockyard at the tip of the wharf, while to the south of the port are the Karachi Naval Base and the Kiamari Boat Club.

The Port of Karachi also faces competition from a new private terminal located 5 kilometres to the west. In recent years the federal government has attempted to alleviate the increased congestion by constructing a second port in Karachi thirty kilometres to the east at Port Qasim and a third major port at Gwadar, about 650 kilometres west of Karachi.

The Karachi Fishing Harbour has been upgraded recently, and a second fishing harbour has been built 18 kilometres away at Korangi. The transfer of some naval vessels to the new naval base at Ormara has brought about further reductions in congestion.

Further deepening of the port has been planned by the Karachi Port Trust in order to enhance facilities. The channel is being dredged initially to 13.5 metres deep to cater for 12 metre draught vessels at all tides. At Kiamari Groyne, located at the outer tip of the harbour, dredging will be to 16.5 metres to enable vessels up to 300 metres long to dock. Other projects to expand the port include:[7]

On November 9, 2007, the Karachi Port Trust signed a US$1 billion agreement with Hutchison Port Holdings to construct a new terminal called the "Pakistan Deep Water Container Port", which would begin operations by 2010, and would have ten berths capable of handling Super Post Panamax container ships.[8][9]

The area around the harbour includes several mangrove forests which are constantly under threat from human activities. To the east of the port lies Chinna Creek, which covers about 6 km² and is dotted with mangrove islands. To the southwest of the port is another much larger mangrove forest in the bay formed by several islands and Manora breakwater; the river Layari flows into this bay, bringing waste from upstream suburbs.[10]

The beach immediately east of the harbour was the scene of a significant oil spillage when the Greek-registered Tasman Spirit ran aground on July 28, 2003.[11] The environmental impact included large numbers of dead fish and turtles and damage to a key mangrove forest, as well as dozens of people suffering nausea.[12]

The Karachi Dock Labour Board (KDLB) is responsible for labour relations between employees and the Karachi Port Trust. In October 2006, the Pakistan government decided to close down Karachi Dock Labour Board by the end of the year as part of its port strategy and under the National Trade Corridor (NTC) programme. The closure of KDLB would cost around Rs 4.2 billion ($70 million) to the national exchequer.[13]